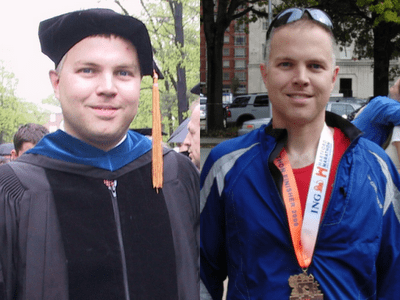 As I embark on my journey to use running to lose weight (30 pounds of unwanted weight that is), I thought it would be interesting to look at why running is so effective and then share some inspirational success stories. As I have explained on my About me page, I have always been able to lose weight when I start running, but when I stop, the weight comes right back on.

You see, I have never done very well with dieting, but when I start running the weight tends to come off so much easier and quicker. Obviously your body type or response to running might be a little bit different, but running/jogging works extremely well for me to trim down. It also works very well for other as I will share 3 specific success stories towards the end of this article. However, I first wanted to dive into why running is an effective weight loss tool and address the question that perhaps you have of how often you should be running to see results.

First, as complicated as all of our bodies are (and they really are), the basic weight loss formula of: If calories burned is greater than calories taken in then you lose weight. That’s about all there is to it. However, this formula becomes more complicated because it encounters physical weaknesses, emotional, mental, and psychological batters along the way. We may all WANT to lay off the calories or work out more, but doing that is not as easy as thinking that. Trust me, I understand the complexity of it.

But from a scientific standpoint – there is nothing complicated about how weight comes off. And the reason that running works so well is due to how many calories are burned from even a short run. Take a look at this chart (from the Mayo Clinic) of all the different types of exercises and how many calories they burn in an hour. So, for all you busy working people that might also be raising a family – running gives you the most benefits for the time spent!

As this chart clearly shows, not all exercise is created equal!  So, you could go exercise for an hour on some of the lower burning activities (like bowling, dancing, or slow walking) and only lose 25% of the calories you would if you went running!

Now, obviously not everyone is going to be able to run 8 mph right out of the gate for an hour.  However, as you can see that running is perhaps one of the best things that you can do for yourself to burn off calories.  Even a half hour of running will help you lose more weight than a full-hour of exercise in many other activities.

This is personally what I have found.  I have discovered that jogging 4 to 5 times a week works very well for me to stay fit and trim.  In a nutshell, there is almost no other activity that will burn as many calories as quickly as running in a short period of time.  That’s why it works so well for those looking to lose weight.

Obviously running is not easy.  Its a process.  You may have to start out walking for 30 minutes a day.  Then move to walking and jogging for a just a few minutes.  Then eventually with time you will be able to run a full half hour without any breaks!  The key is to stay consistent.  I would recommend 4 to 5 times a week of at least a half hour each time.

Now, the purpose of this article is not to walk you through a specific exercise plan, but to simply explain why running to lose weight works and to inspire!  So, now I have 3 specific success stories of people that have lost tremendous amounts of weight through running and improved their overall quality of life.

Pete took a look at a photo of himself from graduation day and didn’t like what he saw.  He decided that it was time to do something about it.  At first he wasn’t even able to run 3 miles without passing out basically.

He decided that he needed to start running more. Over a period of about a year he was able to take his weight from 190 to 170 lbs by doing nothing more than running.

He now has a personal record marathon running time of just over 3hrs 30minutes (which is pretty fast!).

In her late 20’s, Kara weight was hovering at 240 pounds.  She would use food as a comfort to deal with difficult times she was going through after losing here mother. When she went to see her doctor, he put her at risk of Diabetes.  This really changed her outlook on life.  She realized that she needed to do something about it, and started running. She was able to turn her passion to running and saw a BIG difference in her life.

At first she was only about to walk 3 or 4 times a week.  But through practice and repetition was able to go from walking to jogging.  Eventually she started walking or jogging 5 to 6 times a week for about 3 miles at a time.  She also learned how to eat healthier.  After only 5 months, she had lost 40 pounds.  Now she has completely transformed her life and has lost 90lbs in all.

She was also recently able to complete her first marathon!

Jeff Le weighed 290 pounds in early 2008.  On a 5″9′ frame this can add a lot of stress to the body.  After going through quite a bit (break up, getting robbed, etc), he had a dream that he was running and that he was happy.

He decided to join the gym, and make some changes in his life.

After just 5 minutes on the treadmill he started seeing stars and white spots.  Not a good start, right?  Well, he decided to stick with it.  The next day he did a couple more minutes and just kept adding time each day.

Within just a few months he was able to complete a 10k race.  He also had the desire to start eating more vegetables instead of fried foods (running can do that to you).

He just stuck with running as his exercise of choice and pounds flew off.  His pant size went from a 48 inch waist to a 30.  He dropped a total of 130 pounds to weigh in at 160lbs.  He transformation was so big that his own mother didn’t even recognize him when she came to visit.

Not only did he lose a massive amount of weight, he is now a competitive runner.  In 2010, he qualified for the Boston Marathon with a time of 3:10!

What About Your Goals?

These stories and others like it get me excited to go out and start running.  My personal goal is to drop 30 pounds this year.  I am well on my way with over 10 pounds gone in that past 2 months.  What about you?  Do you have any weight loss goals that you hope to achieve through running?  I would love to hear about them in the comments below!

10 thoughts on “Running to Lose Weight: Why it Works and Success Stories”