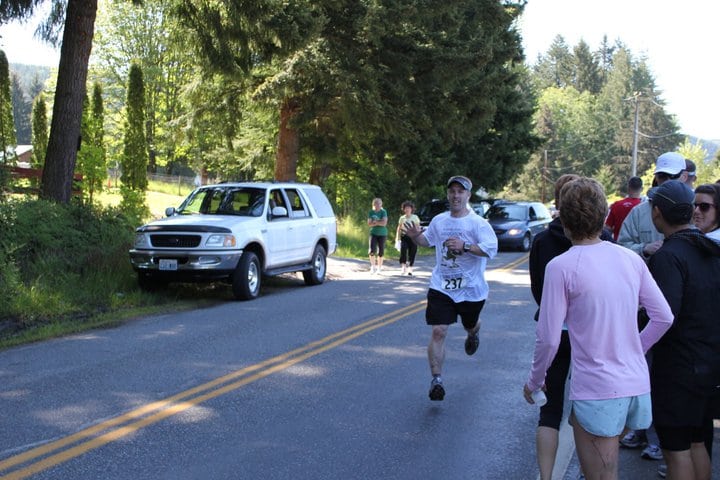 I’m going to be up front, I don’t know if I have ever experienced a “runner’s high”.  To be honest, I’m wondering if it really exists.  I mean when I go running, it usually involve strenuous activity, pushing myself, and is overall difficult.  After all, that’s why running is such a great weight loss tool, because its a difficult exercise!

However, I have to admit that sometimes during my runs, when I’m in better shape, I do feel good about myself and the fact that I am doing something active.  And even sometimes when I’m running at a nice easy pace (without pushing myself too hard), it can be somewhat enjoyable.  Is this what the runners high is all about?  Well, I’m going to dig a little bit deeper.

According to Wikipedia, the runner’s high is caused by Endorphins.  These endorphins are produced by the pituitary gland and the hypothalamus in vertebrates during exercise and other activities. This is also often referred to as an Endophin rush.  Essentially, these endophins often occur during intense activity and can help runners (and others) push through the pain because these endorphins actually prevent nerve cells from sending more pain signals to the brain.  In other words, because of the runners high or endorphins, runners can often run further or faster than they otherwise could because these pain signals are blocked.

Like I said, I don’t know if I have ever reached this point in my own training.  I have certainly reached pain points and particularly when my glycogen stores have been depleted is extremely miserable; however, I don’t recall ever having this second wind or endorphins kick in.  But then again, maybe I just wasn’t paying attention very much.

However, research in animals in particular has shown that these endorphins do indeed exist and do cause interesting reactions in the brain.  Other researchers also believe that this runners high may be part of human evolution.  Without the ability to run at longer distances to hunt and gather, humans may have become extinct.  However, with endorphins being released during strenuous running activity these early hunters and gatherers were able to continue to hunt their prey.  In particular if they were doing a persistence run (chasing animals on foot until the animal becomes exhausted essentially).

Controversy of the Runner’s High

As it turns out, others have also questioned the validity of the runners high. A study available on PubMed done by Hinton ER and Taylor S questioned whether a placebo response mediates the runner’s high.  This study suggested that perhaps the enphorphins were being released in the brain because the runner was finishing the challenge or race, rather than because of the previous description of a runners high.

This theory makes complete sense to me.  Certainly when I finish races or near the end of races I get excited and am able to dig a little bit deeper because I know its almost over!  In addition, race days in particular are usually surrounded by lots of anticipation, planning, and excitement overall.  Waiting at the finish line are usually hundreds or thousands of people cheering you on.  You may even have lots of family and friends there to support you.  I think it would shocking if there were NOT some sort of chemical reaction in the brain that is triggered due the culmination of such an event.

Crossing the finish line is what runners have been looking forward to, and a release of endorphins at this time of excitement seems very plausible.  There have been other studies as well that suggest that this “runner’s high” is more due to the culmination of a challenge or event as opposed to some independent release of endorphins just for running hard.

Finally, it is also argued that endocannabinoids are, most likely, the agent causing a runner’s high (as opposed to just endorphins).

So overall, it is not a given that a “runner’s high” even exists.  Like I said, I don’t know that I have ever personally felt it and I’ve run a couple of marathons and several other races.  Perhaps I just don’t know what to look for.  On the other hand, I have certainly felt the “high” of finishing a race and accomplishing a goal that I have set out for myself.  This might be finishing the race in a personal record time, or just finishing a marathon distance race period!

But there is also plenty of evidence that something is going on with runners!  Some certainly claim to be experiencing this endorphin or endocannabinoid release when they run, which is allowing them to run longer or faster for greater periods of time.  For me the mystery continues.

Maybe this runner’s high exists and maybe it doesn’t.

The one thing I know for sure is that my quality of life and overall health DO indeed feel better when I am running!  I am able to stay fit, lose weight, and generally enjoy a whole host of health benefits when I am running regularly.

What do you think?  Have you ever experienced a runner’s high?  I would love to hear your thoughts below!