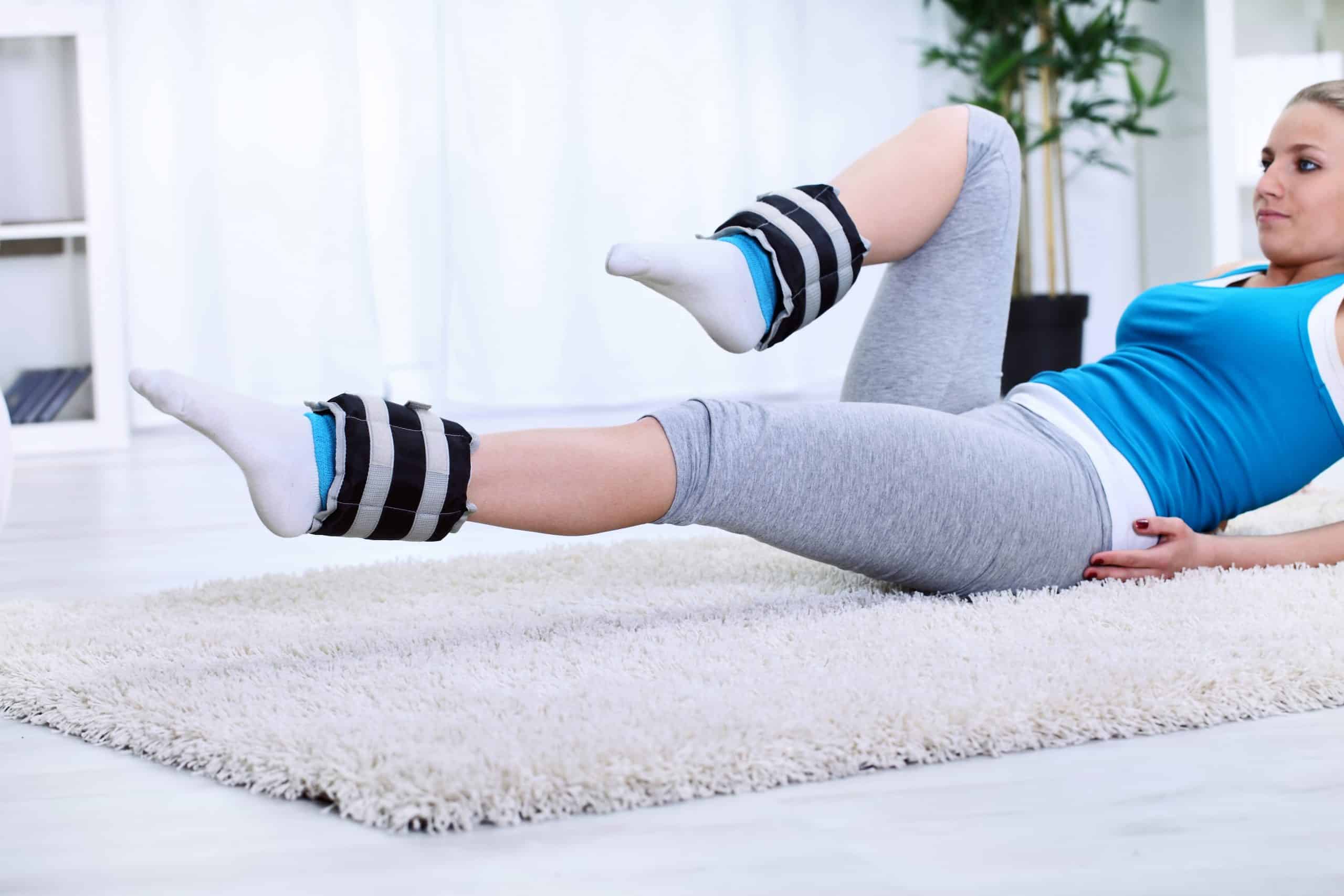 Ankle weights are making a comeback! Social media influencers, fitness instructors, and athletes have all been seen using them, which has helped turn them into the latest sensation.

Yet, they’re more than just a new fitness craze! It seems that everyone is wearing them, even fellow runners on the street.  So, we decided to embrace this growing trend.

If you’re looking for some ankle weights for running, then you’re in the right place. Join us as we talk about the highs and lows of these wearable weights. We’ll also tell you how much extra weight you can add for a safe, injury-free workout.

What Are Ankle Weights?

New to the world of wearable weights? Here’s a brief rundown to help get you started.

Ankle weights are one tool many athletes, especially runners, swear by. They use them to increase power and speed, while boosting endurance and stamina.

These weights are strapped around the lower part of the leg, right above the ankle. They’re designed to add resistance, which helps boost muscle strength.

For starters, ankle weights are basically small sandbags stitched together in a band that you strap around your ankles. You secure in place with thick, adjustable Velcro straps.

They’re sold in pairs with set weights starting at 0.5 pounds and going all the way to 20 pounds. Some also come with slots where you can add extra weight depending on your workout needs. These are more practical because they offer more weight choices.

One of the best things about these wearable weights is their material. Made from mercerized cotton, they feel soft on your skin and won’t cause any discomfort or chafing. You can also wear them over pants or socks without causing discomfort.

At the same time, they’re durable enough to withstand rigorous and intense workouts. Plus, they’re easy to clean. Give them a quick hand-wash with lukewarm water. You can also put them in the washer along with some mild detergent. Finally, leave to air dry and you’re all done!

Ankle Weights for Running: The Good, the Bad, and the Ugly

Are you just starting out as a runner? Or are you a seasoned pro? Either way, it’s only natural to look for ways to improve your training and take it to the next level.

This is where exercise gear, like ankle weights, can help.

However, nothing is ever all good or all bad. Below, you’ll find a breakdown of the benefits and possible risks of using ankle weights for runners.

Ankle weights aren’t a new invention. They’ve just had a recent revival into the world of sports, especially running.

Yet, do they really make a difference? Can you gain strength on your runs just by strapping on a couple of ankle weights?

Keep reading to find out more.

It makes sense when you think about it. If you’re carrying a few extra pounds on your ankles, your muscles have to work harder to run. As a result, you build muscles and boost your overall stamina and strength.

It’s a known fact when you work your muscles, muscle fibers increase, which boosts muscle mass. Not just that, but the more you use your muscles, the more their cells get fresh, oxygenated blood.

Although, that’s not the only way runners can benefit from ankle weights. Strap them on and get started with various strength training, or resistance, exercises.

Here are a few ideas to give you some inspiration:

According to the American Council on Exercise (ACE), repetitive training with one to three-pound weights is terrific for boosting aerobic fitness as well as cardiovascular strength.

You’re probably asking what ankle weights have to do with your cardiovascular health. In a nutshell, muscles need oxygen to move. The harder they work, the higher the oxygen demand.

For those high levels of oxygen to reach your cells, both the heart and lungs have to work that much harder. As they pump more blood, they undergo major adaptive change.

Accordingly, the extra weight increases muscle strength and reduces fatigue time. Combined, you get a stronger, more efficient cardiovascular system. Then, as your lungs and heart adapt to the stress, they learn how to handle longer and more intense workouts with ease.

After a few weeks, you’ll notice you’re lighter on your feet. Plus, you won’t get tired as quickly as you once did. You’ll be able to run for longer, maybe even faster. That’s when you can start to increase your speed bit by bit.

According to one study, one of the best advantages of using ankle weights during running is they give your endurance a nice boost. As your body gets used to the extra training stress of these weights, your muscles quickly adjust.

In other words, when runners add ankle weights to their workouts, their muscles learn to adapt to the heavy load. After that, doing any type of exercise without the weights feels easier, lighter, and less stressful.

This is why trainers use them for endurance training. They make great training tools for those who want to run faster and longer.

Do you want to enhance your training and increase your stamina? Then, using ankle weights when you run is an excellent place to start.

However, ankle weights do come with a few drawbacks, according to one Harvard study. Here are a couple of health risks associated with these wearable weights.

By adding extra loads on the joints, it can lead to an imbalance of your gait. Over time, improper technique can result in chronic aches and pains.

Running for long distances or at high speed increases the level of stress on your joints. It can take its toll on joints, which can lead to stress fractures, as well as damage in the cartilage and ligaments.

Any disturbance in the body’s biomechanics can lead to pain in the lower back. This goes double for those already suffering from chronic back problems.

Not only that, but the extra weight can cause unneeded stress on the hip flexors as well as the pelvic bones. The repetitive nature of running with that extra weight can also lead to spinal cord injuries.

Should You Run with Ankle Weights?

Based on expert testimonies and multiple studies, we came up with our own thoughts on the matter. We concluded that these wearable weights can be beneficial for runners if used the right way.

Adding a bit of extra weight is fine if you’re jogging for fun or for short distances. Also, if you want to boost your aerobic fitness, lose weight, or increase lean muscle mass, strap on some ankle weights.

They work to improve your ability as a runner. They boost muscle strength, increase your stamina, and increase your cardiovascular health.

On the other hand, too much extra weight can be a health hazard if used extensively during runs. In fact, runners practicing for long-distance running events, like 5K races or longer, are advised against wearing ankle weights when they run.

For one, they change the way your foot hits the pavement, which causes an imbalance in your entire stance. In addition, they also put tremendous stress on your ankles, knees, and hips.

Moreover, if you suffer from shin splints, joint problems, or compartment syndrome, it’s better to avoid ankle weights altogether. They can exacerbate the condition and prolong the healing process.

How Heavy Should Ankle Weights Be?

We recommend that you start small. The best thing is to pick a combined extra weight anywhere between one and two percent of your total body weight.

Give yourself time to get used to these wearable weights until your body gets used to that extra load. Don’t rush it or you risk injuring yourself.

After a few weeks, the next step is to increase the length of the run while still using the same small weights. Once you’ve safely managed to run longer distances, that’s when you can start increasing the weight gradually. You can either add half a pound or one full pound each time.

Are you looking to enhance your speed and increase your running distance? Then, ankle weights for runners are one way to do it.

That said, they’re not just restricted to only using them when you’re running. Colorful and stylish, these wearable weights make terrific training accessories. Incorporate them into your workouts for a killer training routine.

Make sure you take it slow in the beginning. The most important thing is to pay close attention to how your body reacts. Two or three additional pounds may not seem that much, but when you’re out running, it’s a whole other story. So, give your body time to get used to the extra loads to prevent injuries or sprains.