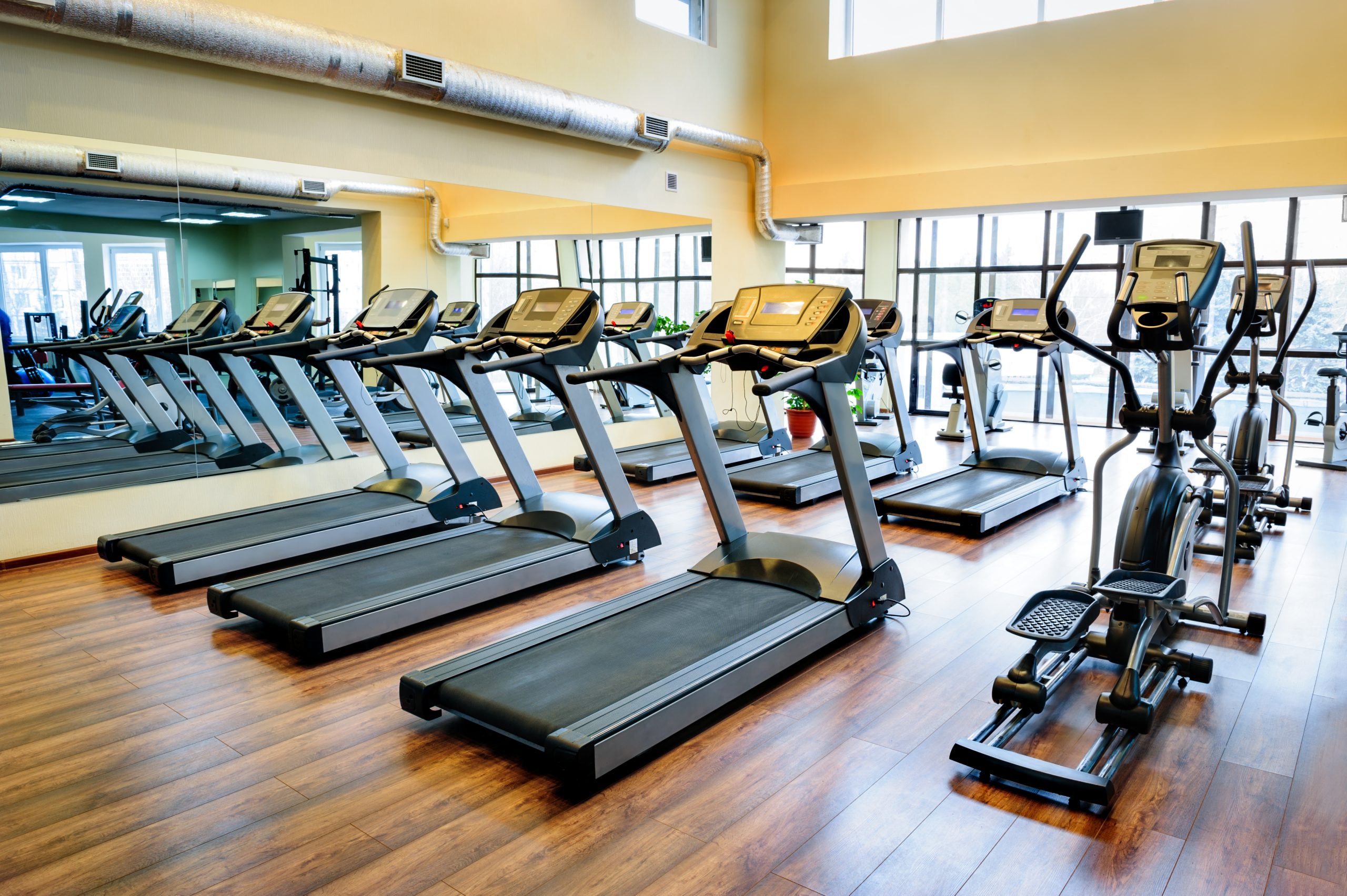 Treadmills are sometimes too heavy for their own good. No one wants to drag a 300-pound treadmill around their home gym. At the same time, professional gyms can’t do with 60-pound treadmills; they’ll wear out fast, and they’re not convenient for a heavy person.

So, how much does a treadmill weigh?

Many factors may affect the average weight of the treadmill, including the motor, incline adjustment, and folding deck. Here’s everything you need to know about the matter.

How Much Does a Treadmill Weigh?

If you’re looking for a treadmill for a home gym, we’re talking an average of 230 pounds. Treadmills intended for residential use are usually motorized, and they must have a sufficient weight capacity for different users. So you’ll mostly find models ranging from 200 to 250 pounds.

If you want a manual treadmill, it’ll be a lot lighter because it doesn’t have a motor. Manual treadmills have an average weight of 60 pounds, but there are heavier models for overweight users. It depends on the weight capacity you want.

Generally, there are different treadmills suitable for all users, so you can’t specify one light or heavy type. The most we can do is point out that some types are heavier or lighter than others.

Factors That Affect the Average Weight of Treadmills

Not all treadmills are made equal. Some are heavier than others, and it depends on many factors. Heavier motors account for heavier treadmills; that’s why manual treadmills are lighter than their counterparts.

The most prominent factor when it comes to determining the treadmill weight is the motor. Powerful treadmills need potent motors, which are heavier than others. As a rule of thumb, the more the load, the more power you need to generate it.

So, motors with higher horsepower will likely be heavier than their counterparts because they need to produce more energy.

Since continuous duty motors sustain the speed and horsepower, they’re often heavier than peak power motors. A single engine can reach 50 pounds, and it’ll be made of titanium or industrial-grade steel to handle the heat.

The frame is basically the treadmill without the motor and belt. So, it’s the major contributor to whether a treadmill is heavy or light. Most average treadmills are made of aluminum since it’s both lightweight and affordable.

Aluminum treadmills are the lightest out of the bunch. Treadmills made of heavy-duty steel are the heaviest because steel is already a heavy material as it is. Meanwhile, titanium lies in the middle of the scale, being 45% lighter than steel and 60% heavier than aluminum.

It makes the perfect balance of lightweight and durability. That’s probably why it’s the most expensive out of the three and mainly only used for luxurious treadmills.

Lighter treadmills will shake under you if you run at high speeds. That’s why treadmills made for sprinting are heavier to endure the force of runners’ feet.

Depending on its type, the treadmill’s belt may add some weight to it. Some heavy-duty treadmills use heavy rubber belts. Generally, rubber is heavier than PVC, so belts made of rubber will add more treadmill weight.

Other belts made of PVC will be lightweight.

In the case of manual treadmills, curved belts are heavier than flat ones because they pack more material. A lot of runners prefer curved decks because they provide a challenge for their workout.

Different Types of Treadmills and Their Average Weights

There are three different types of treadmills you can find on the market: folding treadmills, manual treadmills, and motorized treadmills. Of course, commercial ones are available too, but for professional gyms.

Here’s an overview of each type and its weight.

Folding treadmills are popular among runners because of their compact size. They’re convenient for small apartments because their decks can fold for storage. Plus, they come in both manual and motorized treadmills.

A foldable treadmill will have an average weight of 200 pounds, but you can find lighter options. The manual ones will surely be lighter, but 200 pounds is generally good for a home gym. It’ll also have a decent maximum weight capacity, which is a priority for home users.

Manual treadmills are designed so that the motion of your legs moves the belt. It doesn’t move on its own like the way it is with motorized belts. These treadmills aren’t only more affordable than their counterparts, but they’re also substantially lighter.

The lack of a motor makes for an overall weight reduction, and the manually moving belt is lighter than a motorized one. A manual treadmill will often weigh 60 pounds or slightly more. If weight is a significant issue for you, you may want to consider a manual treadmill. However, it’s worth noting that these fellows offer limited functionality.

They don’t provide high speeds, built-in programs, or screens. You get what you pay for.

Models will have different weights depending on the frame’s material and the motor’s power. More powerful engines are often heavier because they need to generate more power. As for the frame, steel treadmills are pretty heavy, and although titanium ones are lighter, they’re still heavy.

Commercial treadmills are the best out there in terms of functionality, build quality, and power. They’re often the choice of professional workout gyms, fitness rooms, and even physical therapy clinics. They’re seldom chosen for houses, and it’s no wonder. They’re much more expensive than home treadmills.

Moreover, commercial treadmills don’t need as much maintenance. This is because they are highly durable, requiring only minimal effort for maintaining them.

All that said, the best quality of commercial treadmills remains their versatility. These champs support all kinds of running, from walking and up to marathon sprinting.

The average weight of a commercial treadmill will be about 300 pounds. They’re heavier than other types because they require more parts and more powerful motors.

What Is the Average Weight Capacity of a Treadmill?

The weight capacity of a treadmill is often more important to consider than its weight. In the end, you’ll probably keep the treadmill in one place and not move it unless necessary. So the weight may not pose an issue.

On the other hand, the weight limit may dictate whether some users will be able to run on the treadmill. Treadmills will be constructed to support a specific limit. When you go over it, you’ll push the motor harder, which ought to wear out the motor eventually.

If you’re worried about the weight limit, make sure to first see the suggested capacity by the manufacturer. The average treadmill weight limit should be 200-300 if it’s a low-end one.

On the other hand, high-end treadmills will list higher capacities, ranging from 300 to 500 pounds.

Of course, manual treadmills will have lower weight capacities, depending on their capabilities.

Treadmills on the Market Weighing Less Than 100 Pounds

If you don’t want to bother yourself with a heavy treadmill, you may want to explore the market’s lightweight options. Here are two solid options that weigh less than 100 pounds.

All RHYTHM treadmills are lightweight, but this remains their lightest creation yet. At 97 pounds, it’s one of the lightest motorized treadmills on the market. It features a peak motor with 3.0 HP, and it comes in a versatile 2-in-1 design.

Thanks to its innovative design, the folding treadmill converts to a standing desk treadmill whenever you need it. It may be a good choice if you like to work while running.

No matter how hard you search, I doubt you’ll find a lighter treadmill than the ProGear 190. Even for a manual treadmill, it’s pretty lightweight. Of course, that’s because it offers limited functionality, and its weight limit will only suit a number of users. It’s claimed to be 230 pounds, but some users mentioned it starts shaking when it crosses 200 pounds.

It’s more suitable for walking or light strolling as a home treadmill.

Treadmills on the Market Weighing 200 Pounds

Treadmills weighing 200 pounds or less are considered lightweight, and they mostly have decent weight limits. They’re considered the entry-level of the treadmill world.

The treadmill folds down to 9.75 inches high. You can easily store it under the bed or anywhere if you don’t have enough room.

It has a weight limit of 325 pounds, making it a convenient option for overweight users.

The T series from NordicTrack is targeted at residential users. That’s why the treadmills are lightweight and equipped with screens for streaming workout videos. They also come with 30-day free iFit memberships.

The T 6.5 S only weighs 203 pounds, making it relatively easy to move around. In addition, its weight limit is 300 pounds, which is decent for most users.

The screen is only 5-inch, but there’s a 10-inch option for a higher price. The treadmill also tracks your heart rate while running.

Treadmills on the Market Weighing More Than 250 Pounds

Treadmills weighing more than 250 pounds are classified as heavyweight, and they’re mainly meant for commercial use. Here are some of the renowned options on the market.

The Elite Runner from 3G Cardio is one of the heaviest treadmills in the market. Standing on the verge of 400 pounds, it proves hard to handle. However, it features an oversized running surface, and its 4.0HP motor is solid for a treadmill its size.

The treadmill’s maximum user weight capacity is 400 pounds, making it suitable for pretty much anyone. It needs a relatively large space, though.

The Nautilus T618 treadmill is pretty heavy for a non-commercial treadmill. It weighs 288 pounds, making it challenging to move around and handle. But, thanks to its heavyweight, its weight capacity goes up to 350 pounds.

The treadmill has a 15% incline, which is part of the reason for the heavyweight. It also features a 20 x 60 inches running deck. The StrikeZone cushioning adds to the weight, as well, but it protects your knees from impact.

Meanwhile, commercial treadmills take the cake for being the heaviest out of the bunch. They’re meant for professional use in gyms, physical therapy clinics, and hotels. No one chooses a commercial treadmill for a home gym, and the heavyweight is okay for gyms because the treadmill won’t be moved around much.