When it comes to sound, performance, and comfort, Apple AirPods are second to none. But although running with AirPods does have its advantages, they do come with their fair share of disadvantages. They aren’t perfect, far from it, which is why running with them has been a hot debate among runners.

This article lists the pros and cons of running with AirPods. Should you run with AirPods or are they best kept at home? Let’s find out!

5 Reasons Why You Should Be Running With AirPods

These days, everyone seems to own a pair of AirPods, or, at the very least, a version of them. People wear them out on the streets, taking calls and listening to music, but some people use them specifically while exercising and running.

Here are some reasons why you be Running With AirPods, or Apple AirPods Pro, when running.

Here’s the thing with Apple AirPods: they either fit your ears or they don’t.

AirPods have a one-size-fits-all design, and while not for everyone, they do seem to fit the majority of people’s ears. AirPod sales wouldn’t be as ludicrous as they are if they didn’t.

If you’re one of the lucky ones with a standard ear canal—approximately 26 mm in length and 7 mm in diameter—Apple AirPods would snuggly fit your ears. They won’t fall out while doing mundane tasks, making them a suitable choice for running and exercising.

If your ears don’t quite fall under Apple’s “standard” category, don’t fret. Apple addressed the one-size-fits-all problem with the Apple AirPods Pro.

If you’re not happy with the provided rubber tips, you can easily replace them with memory foam.

The sound quality of Apple AirPods is better than most true wireless earbuds and Bluetooth headphones on the market today.

With clear sound, powerful bass, and spatial audio with head tracking, there’s little to complain about the sound. The Apple AirPods Pro is even better with the added active noise cancelling feature.

Sound quality might not seem like a big deal when you’re hyper-focused on your laps, but bad sound can be incredibly distracting. They might even affect your performance overall.

Apple’s high-quality audio doesn’t distract you from your runs and instead welcomes you in, allowing you to look forward and enjoy your daily runs.

Apple’s “poor” battery life has been a running joke even among Apple’s most loyal consumers, but Apple has significantly improved its battery issue years ago. Today, most Apple products—specifically Apple phones—have a 10 to 17-hour battery life.

Apple AirPods don’t have as long battery life as Apple phones, but with up to six hours of listening time and up to three hours of talk time on a single charge, Apple AirPods last a decently long time.

This is fantastic news for distance runners, as the six-hour battery life outlasts most average marathon paces. They’ll cover the entirety of your run time and more.

Plus, a fully charged case can recharge your AirPods three or four times, totaling up to 24 hours of use until the case charger dies. 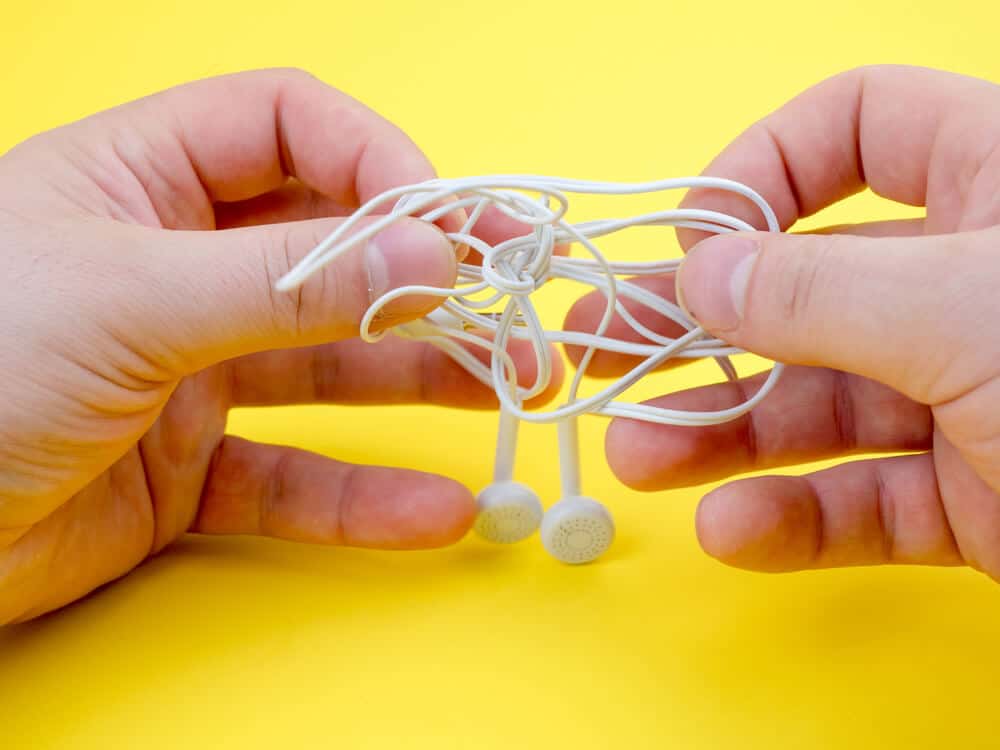 Perhaps the biggest reason why you should use AirPods when running is that you don’t have to worry about tangles.

Wires get in the way when you’re doing your daily laps and running. They can also get caught in something, further adding to the annoyance. You’ll have to stop your runs and fix the wiring, breaking you out of the zone.

You won’t have this issue with Apple AirPods. AirPods don’t shackle you to your device, making it easier to run.

They also don’t get all knotted up in your purse or gym bag, so you don’t have to spend several extra minutes before your runs untangling the wires.

They’re convenient, easy to use, and ready to go anytime as long as they’re charged.

Siri has become a part of the daily life of Apple users, and for good reason. She’s prompt, intelligent, and has a ton of tricks up her sleeves.

With AirPods on, you can easily access Siri anytime, anywhere, even without touching your phone.

Simply tap your AirPods with your finger, call out “Hey Siri,” and ask her to do stuff for you.

You can ask her to change or play a certain song, increase or decrease the volume, and track how many steps you’ve taken. You can also inquire how long you’ve been running and how many miles you’ve covered so far.

With AirPods, you’re quite literally a tap away from accessing a personal running assistant.

4 Reasons Why You Shouldn’t Be Running With Airpods

At first glance, Apple AirPods and their AirPods Pro brothers are the perfect devices for running. With them, you get excellent sound quality and equally brilliant battery life, plus you get access to a personal running AI. There’s nothing to hate.

But AirPods and AirPods Pro do have their disadvantages.

1.   Not Sweat- or Water-Resistant

Apple AirPods don’t have an official IP rating, but most believe it’s IPX4, which is quite a low rating.

For the uninitiated, IPX4 devices are resistant to water splashes from any direction, meaning they’re splash-proof but not water-proof.

AirPods don’t do well with prolonged contact with liquid, like sweat. Unless you’re one of the lucky ones that rarely sweat during your runs, this is a big issue. The only solution here is wrapping the AirPods in waterproof tape, but even then it’s a bit of a hit or miss.

Even though they’re largely advertised towards athletes (who sweat profusely during exercise), water damage isn’t covered by Apple’s warranties. As such, you might have to pay around $70 to $150 to replace each broken AirPod, depending on the model and generation type.

If your AirPods are covered by AppleCare+, you might only pay a service fee of around $29 per incident, but having to pay a warranty at all just for a cut on water damage is ridiculous. Why couldn’t Apple just make its IP rating a bit better?

Earlier, we talked about how Apple’s one-size-fits-all design fits most ears. They’re approximately designed as per the standard ear canal size given by the U.S. Occupational Safety & Health Administration. The keyword here is approximate.

For some people, AirPods don’t fit their ears.

They either feel too tight or too loose.

If it’s the former, they’ll feel extremely uncomfortable during runs. It’s even worse if it’s the latter because it increases the chance of them popping out and losing them during your runs.

Both scenarios can be frustrating when you’re training for a long-distance marathon or when you’re trying to improve your running speed.

On days where you’re doing light jogs or in-place exercises, they’re perfectly fine. But if you’re on the move, they might be more of an inconvenience than anything.

You won’t have to worry about the one-size-fits-all design of the AirPods Pro because they come with different-sized rubber buds.

Still, there’s always a chance of them falling out. And when you’re running in a competition or trying to beat a PB, you always have to decide between going back for the fallen AirPod or continuing the race. That extra anxiety isn’t welcome in a marathon.

With that said, the falling-out-of-your-ear thing can easily be resolved with ear hooks or an anti-lost strap. They’ll look a little awkward but they prevent the pods from falling in the middle of a race.

3.   Noise-Cancelling Is Great, but Not When You’re Running

Regular Apple AirPods don’t have noise-cancelling, but they can block a lot of background noise at the right volume. AirPods Pro and AirPods Max, on the other hand, do. They both feature Active Noise Cancellation, which is fantastic for people who want to get in the zone while listening to music, but not for those who run with AirPods on.

For years, experts have warned people of listening to music at full volume when going out for runs. Not only because it damages the eardrums, but also because it’s a serious safety hazard.

When you run with AirPods on, you’re putting yourself at risk with environmental hazards. 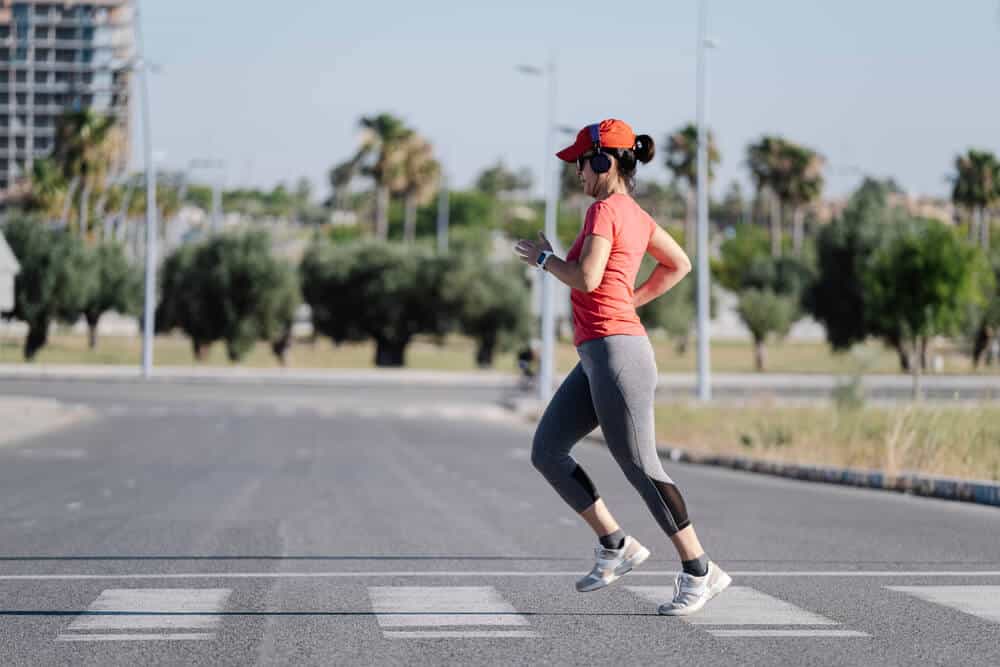 At high volumes, AirPods block out ambient sound and background noise. With them on, you won’t be able to hear cars honking, dogs barking, and, more crucially, footsteps coming up behind you. This is especially true with Apple AirPods Pro and Apple AirPods Max, with their most prized feature being noise-cancelling.

Luckily, the noise-cancelling function is a feature you can turn off. You can also switch it to “transparency” mode, which lets you hear what’s happening around you. Still, you won’t be as focused on your surroundings with music blocking your senses. As such, it’s always best to either ditch the sound entirely or listen at a (very) low volume.

Let’s face it: Apple Airpods aren’t cheap. At least, not as cheap as regular wireless earbuds.

With a Wired Charging Case, standard AirPods cost around $100 to $150.

You can probably get them at a discounted price during sales and such, but they’ll always be around that price point. You can purchase a second-hand one at approximately half the price, but that comes with serious sanitation issues to consider.

Of course, with price comes quality, and Apple doesn’t disappoint with its quality.

If you’re meticulous about your stuff, the one-off fee is worth it. But if you tend to lose things a lot, you might misplace one of your AirPods at some point and require a replacement.

It’s fine if you just lose them once, but the cost really adds up if you lose them all the time.

Final Thoughts On Running With Airpods

Running with AirPods has its pros and cons.

On the other hand, AirPods aren’t sweat or water-resistant, which increases the risk of damage. Plus, running with music in general is a safety hazard because it blocks your senses from environmental cues around you.

In the end, it all depends on how you use your AirPods when running. If you’re worried about them falling off on your runs, it’s worth investing in a pair of ear hooks or an anti-lost strap. Also, make sure to listen to songs and podcasts at a low volume so you can still hear the honking of the cars and the like around you.