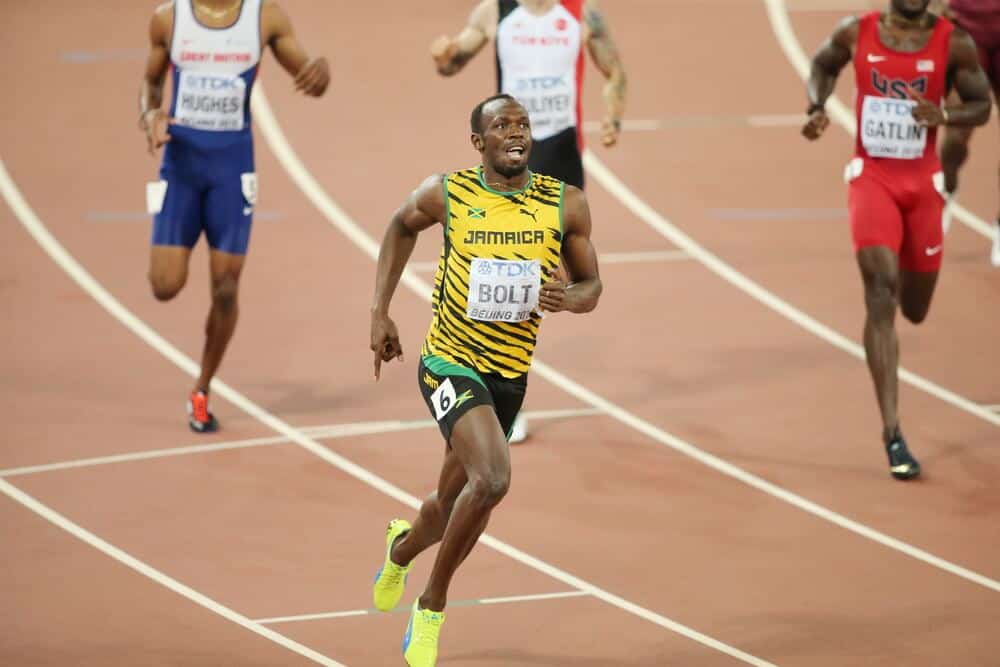 Among the thousands of runners that compete in world marathons and the Olympics, only a notable few are worth mentioning. Usain Bolt and Jesse Owens first come to mind, but there are other famous runners that have solidified their position in the field.

In this article, we’ve listed 12 of the most famous and note-worthy runners of all time, including their incredible achievements.

Let’s start this list strong with arguably the most popular runner of the 21st century: Usain Bolt, the Micheal Jordan of track-and-field.

Everyone and their dog has heard of Usain Bolt. When you look up “who’s the fastest man alive?” thousands of results declare his name. And indeed, no one deserves the title more than him.

Usain Bolt is widely considered the greatest sprinter the world has ever seen. He took home eight gold medals at the Olympics, and currently holds the official world record for 100-meter and 200-meter sprints.

Usain Bolt has been breaking records ever since he was a teen. When he was just 15, Bolt won gold in the 200-meter sprint at Jamaica’s National Stadium in Kingston, subsequently becoming the youngest gold medalist in the junior championship at any event.

In 2017, just after the 2017 World Championships, Usain Bolt announced his retirement from sprinting as he’d sustained a serious hamstring injury during one of his races.

Steve Prefontaine was an American long-distance runner who won 120 of the 153 races he’s participated in.

Among the 120 races he’s won, he took home four 5,000-meter titles three times in a row, a feat that was never seen before. He was also the first-ever athlete to have won four consecutive NCAA track titles in the same event.

Prefontaine’s achievements were so impressive that he single-handedly sparked a boom of running in the 1970s. His name was revered, uttered far and wide across the nation.

In just a few years, Prefontaine became the national icon of running—a status held in high regard to this day. He may not be the most famous athlete of the 21st century, but he’s still among the most well-known Oregon athletes of all time.

Tragically, Prefontaine’s career was cut short when he died in a car accident in 1975. He was only 24 at the time. Still, his great achievements will never be forgotten.

To top it all off, he achieved 65 consecutive victories in the long jump over a span of 10 years, becoming one of the world’s longest undefeated streaks in the sports category.

The International Association of Athletics Federations and Sports Illustrated held him in similar regard, hailing him as the “World Athlete of the Century” and the “Olympian of the Century” respectively.

Today, Carl Lewis works as a full-time assistant coach at the University of Houston. With his help, the Cougar Sprinters of Houston’s track-and-field roster won their second consecutive season in the American Indoor Track & Field Championships (2019-2020).

Fanny Blankers-Koen, AKA the “Flying Housewife,” was a Dutch track-and-field athlete that paved the way for women to be permitted to participate in sports.

During the time when women were highly criticized for participating in any sports activity, Fanny Blankers-Koen took home four gold medals at the 1948 Summer Olympics in London.

She didn’t stop there, however.

At 30-years old, she won five other European titles and a staggering 58 Dutch championships! On top of that, she set or tied at least 12 world records.

Her incredible victories helped eliminate the old belief that age, sex, and motherhood weren’t barriers to succeeding in women’s sports. 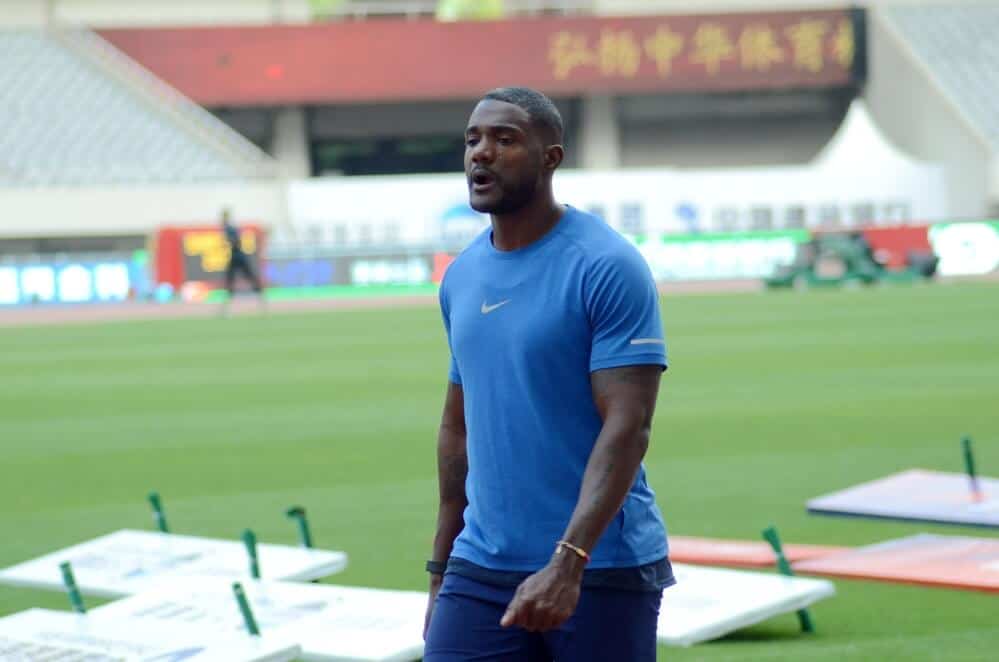 Justin Gatlin is an American 12-time World Championship medalist and a 5-time Olympic medalist. In 2017, he defeated the world’s greatest sprinter—Usain Bolt—and won an unlikely world title at the age of 35 in 2017.

Justin Gatlin’s feats were by no means secondary. After all, there are only a handful of people who can take home 12 World Championships in such a short time.

However, Gatlin isn’t really famous for his world titles. He’s famous for the controversy that surrounded him upon his comeback.

Instead of being known as the world’s oldest athlete to win a championship, he became the face of doping in track-and-field.

For the uninitiated, doping in sports is the use of banned performance-enhancing drugs by athletic competitors. His first doping ban occurred sometime in 2001, when he was banned from competing internationally for two years after having been tested positive for amphetamines.

He was caught doping yet again in 2006, where he was banned for eight years after he tested positive for “testosterone or its precursors.”

After the ban (which was reduced from eight to four (much to the displeasure of track-and-field fans), Justin Gatlin’s unfortunate legacy followed him.

In a 2017 interview with ITV News, over 15 years after the first doping incident, he issued a public apology.

“If they want an official apology, I’m sorry,” he said to ITV, then followed it with, “I apologize for any wrongdoings or any black eyes I have brought onto the sport.”

Justin Gatlin is now retired, but he will forever be dubbed as “that guy who doped his way to championships.” An unfortunate title indeed.

Haile Gebrselassie, not to be confused with Haile Selassie, is one of Ethiopia’s most famous long-distance track athletes.

He took home two Olympic gold medals in the 10,000-meter run at the Summer Olympics, and four World Championship titles in the same event.

He also won the Berlin Marathon with a record time of 2:03:59, which stood firm for three whole years until fellow Ethiopian runner, Kenenisa Bekele, surpassed it by 2 minutes and 18 seconds.

We can’t discuss Haile Gebrselassie without at least mentioning Kenenisa Bekele, one of his biggest rivals.

Gebrselassie defeated Bekele six times on the track and twice in road competition, but Bekele defeated Gebrselassie in five games, including the 2005 Paris World Championships, the 2004 Athens Olympic Games, and the 2008 Beijing Olympic Games.

With so many brilliant Ethiopian runners breaking world records and winning Olympic gold medals, there’s always been a debate as to who the greatest Ethiopian athlete truly is.

However, Kenenisa Bekele has often been dubbed the greatest male distance runner in history due to his incredible speed and stamina.

Allyson Felix is the most-decorated female runner in the US, and for good reason.

Allyson Felix is included in TIME magazine’s list of the 100 Most Influential People of 2020 and 2021.

Her feats speak for themselves, but her position on the list was solidified after she publicly called out Nike’s refusal for guaranteed salary protection for its female athletes.

Nike decided to pay her less after she gave birth to her daughter in 2018. This urged her to speak out against pregnancy discrimination against female athletes, subsequently prompting the brand to expand its maternal policy in 2019.

Today, she’s an advocate for maternity rights within the sports community. She also started her own apparel brand after she left Nike, and wore all the shoes she created at the Games.

Like most of the runners on this list, Allyson Felix is now retired. She departed the 2020 Tokyo Olympics with the most medals of any track athlete in U.S. history. 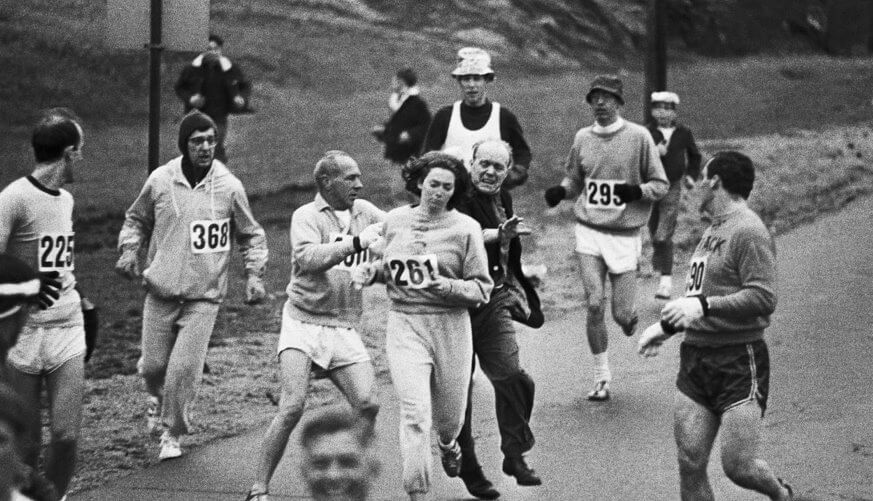 Kathrine Switzer was the first-ever female competitor to have joined the Boston Marathon in 1967—a time when women weren’t allowed to participate.

To disguise her gender, Switzer registered using her initials: K.V. Switzer. But as she was the only woman who competed in the race, she was quickly spotted among the sea of men.

Multiple attempts were made to remove her from the race, but she stood firm. She wanted to compete no matter what.

Even the marathon director, Jock Semple, ran after her and practically assaulted Switzer to stop her from competing. He grabbed her shoulder and flung her back, screaming, “Get the hell out of my race and give me those numbers!”

Switzer wasn’t perturbed. With fellow racers running interference, she persevered and finished the race in about four hours, 20 minutes. She didn’t win first place, but she didn’t have to. Her actions proved to the world that even women can complete a marathon.

When 1973 rolled around, the Boston Marathon finally allowed women to race. Switzer was among the first people who registered, and she went on to run 35 other marathons. She even won the New York City marathon in 1974.

Today, Kathrine Switzer is an accomplished runner, author, and TV commentator. She also runs a global non-profit called 261 Fearless, which she uses as a means to empower women to overcome all sorts of life obstacles.

10.   Florence Griffith-Joyner, the Fastest Woman That Ever Lived

Florence Griffith-Joyner, or Flo-Jo for short, is often dubbed as the fastest woman that ever lived.

The closest that did was Jamaican runner Elaine Thompson-Herah on August 21, 2021, who completed a 100-meter race in 10.54 seconds. Close, but not close enough.

Flo-Jo was known and loved for her incredible athleticism and eclectic personality. She won a silver medal in the 1984 Olympic for the 200-meter distance, and went on to win three gold medals in the 1988 Summer Olympics in Seoul.

Later, she served in the office with Tom McMillen.

Eliud Kipchoge is a Kenyan long-distance runner that has been described as the “greatest marathoner of the modern era.”

He’s a five-time Olympic marathon winner who took silver medals at the 2007 World Championships, the 2008 Summer Olympics, and the 2010 Commonwealth Games.

Kipchoge won his first-ever world championship at the young age of 19, taking the world by a storm at the IAAF World Cross Country Championships. He also set a world junior record on the 5000-meter track he participated in.

Furthermore, he finished 4:43 minutes ahead of Kenyan Amos Kipruto, who placed second in the race.

This list wouldn’t be complete without the national hero himself, famous runner Jesse Owens.

Jesse Owens was an American track and field athlete who took home a staggering four gold medals in the 1936 Olympic Games in Berlin.

Although the championship occurred over 85 years ago, it’s still often talked about today. After all, he was the athlete who “went against Adolf Hitler.”

When he placed first not only once but four times in the Olympic games hosted by Nazi Germany, his victories were a major blow to Hitler’s intention to use the Berlin Games to demonstrate Aryan superiority.

Jesse Owens was and still is the greatest and most famous athlete in track and field history. The 2016 movie “Race” is a brilliant summation of his achievements. It’s definitely worth a watch if you haven’t seen it already!

Final Thoughts On The 12 Famous Runners With Jaw-Dropping Achievements

There you have it, folks; our top 10 list of the world’s most famous runners! To this day, the athletes listed above have impressed people with their endurance, speed, and skill.

Even if you’re not a big fan of the sports, you’ve likely heard their names at least once in passing. If you haven’t, they’re worth looking into. Their achievements are truly staggering and inspirational.