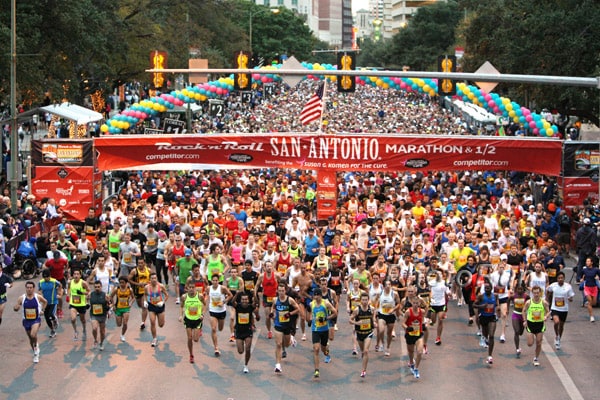 So last week I had a friend of mine mention that he was thinking about trying a marathon at some point but did not know when would be the correct time to go after a goal such as that since he was somewhat new to running.  He has been ripping it up at the half-marathon distance having completed 3 already in just a few months but what about the next step?

You know, that is a great question and once you enter the world of fun runs and especially once you brave the half-marathon distance one cannot help but think about doing a marathon.  A marathon is the quintessential goal of the goal oriented runner but how advanced of a runner do you have to be to go after that goal?

Basically like most things in running my experience has been that the answer varies and is very much dependent on your goals and the type of runner that you are.

When I was thinking about doing my first marathon, I did some research on this subject and most of what I found said that you should be running consistently for a year before you try to train for a marathon.

In my case that is exactly what I did.  I just started getting back into running in 2010 and ran my first post-high school 5k in March 2010 (super sucked but that is a different story).  It was not until around March of 2011 that I started training for my first marathon which was held in Seattle that June.

It worked out for me and I was able to finish my first half-marathon along the way in September 2010 before I really got into marathon training.

Now that said, I have had a lot of experience with various friends and colleagues who had similar ambitions to run a marathon and they just sort of went for it right from the start with mixed success.

What I have objectively concluded is that it really has more to do with how injury prone you are than how long you have been running.  Marathon training program takes a toll on you and if one is injury prone they will likely get nicked up and it will throw off the consistency of their training.  If you have a solid running base under you, you will be able to make it to the marathon starting line in good shape.

That said, if you are not injury prone you can make it through the program right off the bat (recommend an easier one that is designed to just get you to finish versus be super competitive the initial time out).

If you just want to jump right into it, you should check out some of the Hal Higdon plans to structure your marathon training plans.  Again, focus on finishing and not trying to keep up with the Kenyan’s.

If you are super new to running Hal Higdon’s 30 week Novice Supreme program might just be the thing.  This program is actually designed for those who basically woke up on day and said, I have not really run much before but hey a marathon would be fun.

Hal Higdon’s Novice 1 program is probably where you should start if you have at least had some experience running.  It starts pretty slow and if you following it and do not get all worked up on pace, place, and whatnot, it will get you to the finish line in one piece.

If you are more of a somewhat consistent runner Hal Higdon’s Novice 2 program might just fit the bill.  This program is basically designed for those who have run some 5ks (maybe even a half-marathon) and have been training anywhere from 3 – 5 days a week and run anywhere between 15-25 miles a week.  If this sounds like you, give it a shot.

If you are injury prone, you might want to have run consistently like 3-5 days a week for several months before trying to ramp up in a marathon training program.  As you start to ramp up in the program and you are starting to feel like you are pushing it or are on the verge of injury, there is nothing shameful about taking a step back to a less rigorous plan.

Now I will say that if you do get to a point where you can successfully complete a 16-18 week marathon training program and you stick with it after the big race, you will have built yourself up so much that you will likely be able to call those injury prone days a thing of the past.

2 thoughts on “How Long Should You Run Before Training for a Marathon?”