I just completed running the 2013 Tri-cities Half Marathon.  Like any race, the event culminates months of training and anticipating how everything will go.

I want to provide more of a review of how the race was organized, what you can expect, and an overall review of the race should you decide to compete in the Tri-cities Half Marathon in 2014, 2015 or beyond.  Of course, I’ll throw in my own thoughts and experiences a bit along the way.

The packet pick-up was pretty standard here.  For the Tri-cities, there was a pretty decent sized expo at the Red Lion across from John Dam Plaza.  I missed out on the pink water bottles that said, “Hydration is Sexy”, but I got hooked up with the Cow Bells for my kids.

According to the registration website, packet pickup was “required” the day before.  However, it looked like they were still doing some same day registration before the race started.

The packet was stuffed full of the usual coupons and ads for future races.  The tech-shirts turned out pretty nice and I decided to run the race in it.  I was also happy to see the timing chips were the kind included on the race bibs.  Its always nice to have one less thing to worry about (no tying a race chip to your shoe).

I was able to hitch a ride with Stephen and another friend Chris to the race.  We showed up about 45 minutes before the 8am start time.  I have to admit that I don’t think I’ve ever seen a high school band playing music before a race, but sure enough the band was on the scene!

In addition to the band, they had some warm-ups being led by one of the local gyms. (Update: The local gym was Elite Fitness). Stephen, Chris, and I were more concerned about getting our own warm up jog in rather than doing trunk twisters with the group :).   After a nice slow jog of about a half mile or so, we made the standard pre-race pit stop.

They had about 3 or 4 porta-pottys in addition to the park’s nicer restrooms.  The race was small enough that there was no line at any of the restrooms (really).  Perhaps it got busier when the 5k and 10k groups showed up later.

The race was fairly well organized. I felt like I knew where I was going and had no issues overall.  However, I’ve also been to quite a few races and knew what to expect.  If this is your first race, just make sure you show up early and pay attention to what’s going on (find the start line, etc) and you will be fine.

I was able to nuzzle my way up in the top 3rd of the pack near the start line, while Stephen got up near the very front.

The race started with a basic countdown from 10, which worked just fine with the smaller sized group.  I started the race out well, and ran my set planned pace for the first 3 miles.

If I recall correctly, they had aid stations just about every 2 miles.  They had both water and gatorade at each station, and I never had any issue getting what I wanted.  They also had GEL available at 3 or 4 stations.  I actually brought my own GUs with me along the way so I could take it when I was ready (miles 5 and 9).

In addition, they had porta-pottys at every aid station as well; which unfortunately, I needed at about mile 3.  I lost about a minute taking care of my business at the second aid station, and felt just okay the rest of the way…I made it without another pit stop :).

The course itself was fun for me; being from the Tri-cities.  We got to run through Richland for part of the race before we made our way down to the Columbia river trail.  Here’s a map of the course from my Garmin Forerunner 301 GPS watch that I used on race day: 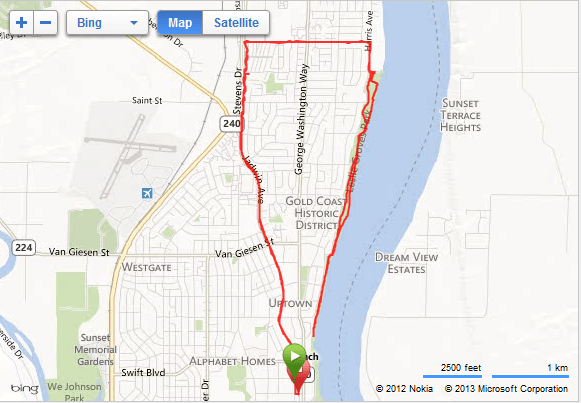 The turn from Jadwin onto Spangler is at the top of a hill.  So, just after mile 3 is a nice downhill (I personally like downhills).  Then you make your way through some residential streets to the path along the river and run through Leslie Groves Park.

Because its an out and back course, you will start to see those leading the race pass you by.  I saw Stephen sometime between mile 5 and 6.  I was able to slap him high 5 as we passed and wished him luck…he was really in the zone and was well over a mile ahead of me by this point.  (This was expected!)

Below you will also find the elevation chart from my Garmin watch for the race.  This clearly shows the uphill that you have to attack at about mile 10.  No hill is fun, but this one wasn’t overly terrible.  Yes, its steep…but its fairly short and once you’re up it, the rest of the course is basically flat or slightly downhill.

The weather for the Tri-cities half marathon was not fun!  The temperature was cold at the start, probably around 40 degrees.  But it felt much colder because of the wind!  I decided to brave the cold at the beginning and go with just my short sleeve shirt and shorts.  After a few miles, I felt just fine, and by the end would have dreaded running pants or a long-sleeved shirt.

(My friend Chris ran with jogging pants, under-armor shirt, and a jogging jacket…he felt pretty overheated by the end.

However, I don’t think the wind significantly slowed anyone down.  Most of the time the gusts were not too bad.  The wind is the wild factor in the Tri-cities at this time of year.  A nice wind could pick up at anytime!

This is a fun family and friend supported event!  Because the race goes through several residential streets, lots of people were out front of their houses holding signs or waving runners on.  Someone must have been handing out signs that said, “Run Like You Stole Something!” because tons of people had this sign, and it got kinda old if I’m completely honest :).  Besides, its bad advice.  If I stole something, I’d be sprinting like crazy….a terrible strategy for a half marathon!

Okay, but overall because you run through neighborhoods and parks, there’s lots of crowd support and people cheering you on.  Always nice to feel like people are rooting for you.

I was happy to see the finish line coming.  By this point, I knew I wasn’t going to get a PR (but I really wasn’t planning on it anyway)…I was just happy to finish!  Lots of people cheering, and who knows, maybe the band was still there…don’t remember.

I crossed the finish line in a time of 1:44:06.  A little over 3 minutes behind my PR.  Considering I lost about a minute at my pit-stop, and the fact that winter training is always hard, I was satisfied with my time.  I feel like if I train for a couple of months, I should be able to easily beat my PR time.

Here is my mile by mile breakdown from my GPS watch. (Notice the slow pace at mile 3…ugh). 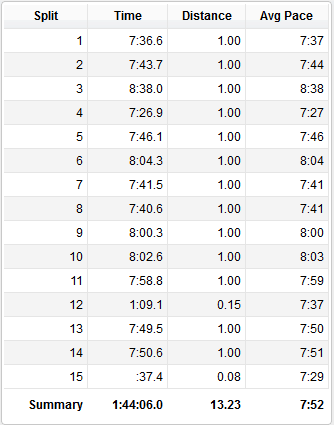 There was plenty of post-race food and beverages.  They had water, powerade, granola bars, cookies, crackers, bananas, and probably more.

There were also massage tables if you needed a post race massage.

Overall, the race was fun, was a good course, was well organized, and I’d recommend it to anyone looking for a good race in the Tri-cities.