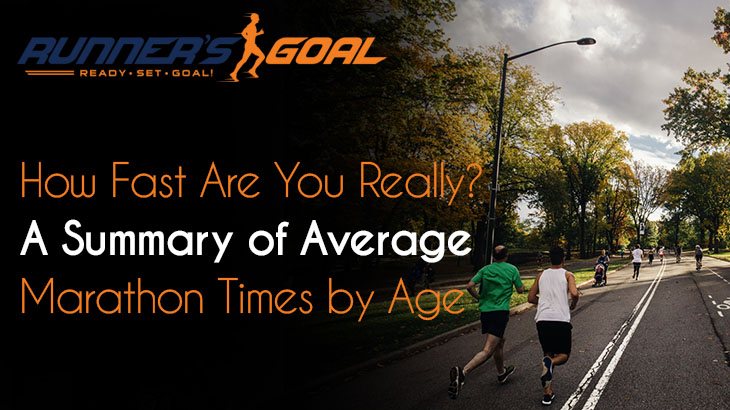 Have you ever wondered how your own marathon times stack up against that of other runners your age? Sure, we’re all our own biggest competitors. But how fast are you really?

Perhaps knowing the average marathon finishes for your age group will inspire you to have a long-term goal to work towards?

Average marathon finishes across the globe

Some really interesting research has been done by Jens Jakob Andersen from the Copenhagen Business School on average marathon finish times across the world.

Based on a database of 2,195,588 marathon results, his study is currently the largest ever in history. After eliminating outliers, Andersen was still left with 1,298,588 usable results, which revealed some pretty interesting statistics.

Median marathon finish times for the US

These times are slightly slower than the median marathon finish time for men for US marathons in 2014, which was 04:19:27. A median of 04:44:19 was calculated for women in US marathons for the same year.

Marathon finish times per age group for the London Marathon

You probably would agree that comparing the marathon finish times of a 25-year old runner to that of one in his or her 50s is hardly fair. So how do your times weigh up against that of runners your own age?

Strava has released some interesting statistics in this regard based on info gathered from 1,990 of their application users for the 2014 London Marathon. According to this data, the following average marathon finish times were recorded per age group for this specific race:

The above data is limited to a relatively small group of runners from a single race. Finish times for males and females are combined.

The following set of data from 2013 were gathered from the finish times of the US’s three biggest fall marathons, namely Chicago, Marine Corps, and New York City. They will give you a more accurate indication of how your own times measure up.

If this data is still a bit limited to your liking, why not enlist the help of an age grade calculator to help you see where you’re at? Age grading can be defined as a method that applies a formula to each runner’s actual time to account for slowing due to age factors.

Although this tool is mostly used by master runners to see how their times compare to that of younger runners on a leveled playing field, it can also be used to show you how your times compare. For example:

The following comparative levels have been defined for age grading:

Therefore, if you want to know what marathon finish time you have to achieve in order to be considered an athlete of regional class, then simply enter the value 70 (as shown above) into the age grade calculator in the age performance percent box.

You’ll then enter your gender, age, and event distance (which is 42.2 km in this instance) in the relevant boxes. By then clicking on the result tab, the calculator will give you the marathon time that you need to clock in order to be considered a regional class athlete at your age. The same obviously goes for all of the other classes.

So whether you prefer to compare your own marathon performance to global or regional averages from past races, or to target times calculated for your desired level of competition, the important thing is to keep growing and improving as a runner.

Even if clocking faster times isn’t one of your goals, that’s perfectly fine. These stats remind us that we are part of a global running community that is reaping countless benefits from lacing up and getting active. And that is highly commendable.