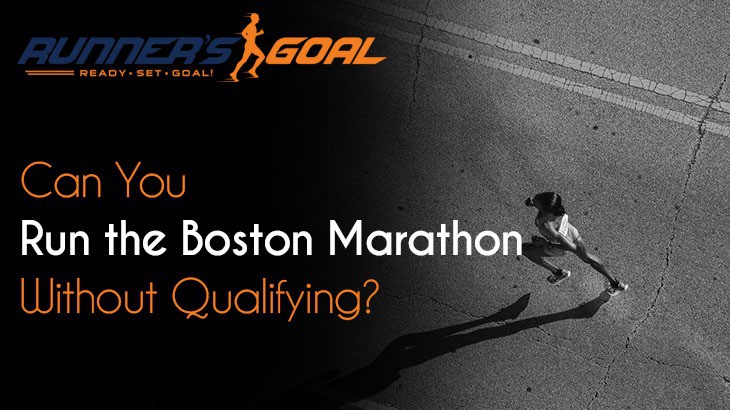 Running the Boston Marathon is something almost every runner dreams about. It’s a race known for attracting top talent and runners. Many runners face grueling training schedules just to knock a few minutes off their best times in order to qualify for this legendary experience.

What happens when you just aren’t fast enough? Do you have to kiss your dream goodbye? Or can you run the Boston Marathon without qualifying?

To even have a shot at running the Boston Marathon, you need to run a qualifying marathon in a time that is deemed fast enough for the elite race in Boston. How fast is fast enough?

That depends on your gender and your age group. But to qualify for the 2018 Boston Marathon, the overall ranges for both men and women of all ages run from 3 hours and 5 minutes to 5 hours and 25 minutes.

Even if you can easily run a qualifying marathon in 5 hours and 25 minutes, don’t get too excited. Before you can wear your Boston Marathon celebration jacket, there’s a catch. Let’s say you are a woman who is at least 80 years old with a qualifying time of 5 hour and 25 minutes. You have earned your jacket and spot in the race.

But, if you’re a man who just hit 40, you have to run a qualifying marathon in a much more challenging 3 hours and 15 minutes time.

Even Reaching Your Qualifying Time Doesn’t Guarantee You a Spot

You’ve trained harder than ever for the past year. You’ve logged mile after mile, added hills, fought your way through sprints, and watched your nutritional intake like a hawk.

Finally, all that work has paid off. You’ve managed to barely reach your qualifying time for the Boston Marathon. But don’t take your victory lap and start telling everyone you’re heading for Boston just yet.

You still might not get to run it, even though you’ve met your qualifying time. Because Boston is at the top of most runners’ wish list, it’s extremely competitive to land one of those coveted spots at the start line.

When it comes to registering for the race, the fastest runners get to register first. Once the spots run out, you’re out of luck, even if you’ve met your qualifying time.

For the 2017 Boston Marathon, only runners who were two minutes and nine seconds faster than the time for their gender and age category were given a spot in the race.

As a runner who has worked tirelessly to reach Boston, that’s a bitter pill to swallow — you’ve qualified, but you still don’t get a spot.

But if you’ve given it your all and still can’t make it into the Boston Marathon based on your times, there is a loophole that may still get you there. You’ll just have to be willing to put in some additional hard work in another way.

Run for a Charity

Going this route to secure a spot in the Boston Marathon may not feel as good to a runner as actually reaching their qualifying time, but each year the charity runners raise a lot of money to help make this world a better place.

Knowing you’re doing something to help others may take the sting out of not reaching your qualifying time.

Give It Your All

Whether you’ve landed in Boston sheerly because of your own hard work, natural talent and strict training program, or you’ve received your spot because you’ve put in the sweat equity needed for some serious fundraising efforts, you’ve earned your spot. Now make the most of it.

Get out there and give it your all. With each step you take, you’ll be living the dream all runners wish they could. We’ll be with you every mile, at least in spirit.