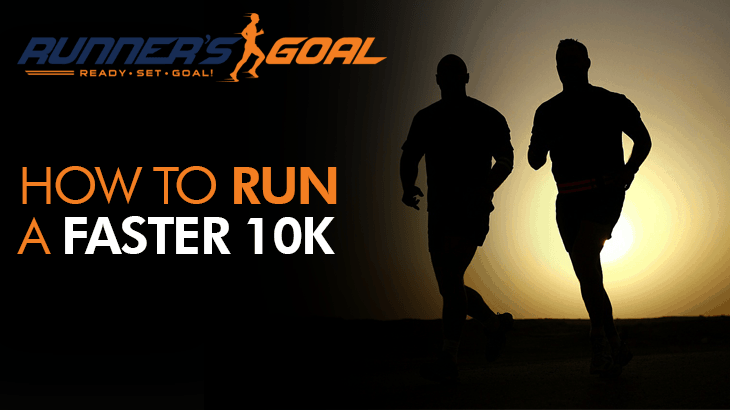 You’re tired of landing in the same finishing spot in every 10k you participate in -- not first, but not worst. If you want one of the coveted performance medals at your next race, you’ll need some great tips on how to run a faster 10k.

Quick Navigation
1. Speed Up Your Long Run
﻿2. Up Your Mileage﻿
3. Add Speedwork
4. Run Your Course
5. Don’t Steal Your Running Form From Shaggy on Scooby Doo
6. Use the Bathroom Before the Race
7. Don’t Go Out With All Guns Blazing
8. Throw in Some Hill Work
9. Fight the Battle of the Bulge
﻿Remember ﻿You’re a Work in Progress

1. Speed Up Your Long Run

Simply logging your miles during a weekly long run isn’t enough -- you won’t improve as a runner by phoning in your performance. Being able to tough out the distance might work for marathon running, but a 10k isn’t an amazing endurance test that only the cream of the crop can complete.

A 10k is a manageable distance for most people so don’t be intimidated to push your limits. Instead of merely checking off your long run on your list of things to do, get the maximum benefit from it.

To boost your overall performance in your next 10k race, make your training runs matter by putting your body to the test.

Try to run race pace on some of your long runs and see what happens. If you aren’t sure you can handle a full-on race pace for the entire run, start by running the last half at the pace you’re hoping to achieve on the big day.

What’s the longest training run you do while preparing for a 10k? Do you hit your 6.2 miles and call it a day?

Think about the first time you bumped up from running a 5k to running a 10k. You had to do some additional training, but by the time you completed your first 10k, running a 5k suddenly seemed like an easy day of running.

That’s exactly what upping your mileage can do for you as a runner. It trains your body to do more.

If you are running 9 mile long runs, when racing day comes, only running 6.2 miles will feel like you are on vacation. You’ll be able to turn up the heat the last half of the race because your body will be stronger and more prepared than it was before.

Don’t do too much at once. You want to beat your PR, not sideline your running while you let an injury heal.

You aren’t going to become a faster runner if you never pick up the pace. Throw some sprints into your sessions to shave time off your PR.

Don’t be a hero and add sprints into every run. While that might seem like a good idea, it’s actually counterproductive because sprinting takes a toll on you so you’ll need some recovery time between hard sessions.

Beginners shouldn’t do hard sprints more than once a week to keep injuries at bay. After a light warm-up, do your sprints at the beginning of a session -- running after you’ve done your sprints will help you learn to run on tired legs and will keep your legs looser so you won’t feel so stiff afterwards.

Being familiar with a course is a great way to improve your time when you run it. If there are any surprises in the route, it’s best to know about it ahead of time.

Some races are legendary for certain segments or for just being a tough race overall, like the Bix 7. Others can be given a vague label like “gentle hills” that you consider mini mountains when you see them.

We’ve all been sabotaged during races with an unexpected hill either in the beginning or the end of the course. If we’d known about that particular curveball, we could have planned for how we would tackle it ahead of time.

But when you’re already midway through your race, there’s no graceful way to deal with an unexpected challenge -- you just have to grit your teeth, tough it out, and hope it won’t affect your time too much.

Knowledge is power when it comes to a race course. If you know something is coming up, you can come up with a plan on how to handle it.

If you’re traveling for a race, chances are, you won’t have the luxury of running it before race day. But you can drive the course or see if there are online videos that might give you a clue about any surprise hills.

5. Don’t Steal Your Running Form From Shaggy on Scooby Doo

We can’t stress this enough -- don’t hunch when you run. Form matters.

If you have good form, you’ll be able to run faster, more efficiently and with less pain. If you’re not sure what your form is like, ask another runner, preferably a running coach, to check out your form while you run.

If you don’t know any runners who would be willing to offer you feedback, have a friend shoot a quick video of you running and then watch it carefully. Does your form look like other runners, or does it look awkward?

Think about your form when you are running. Make a conscious effort to correct any bad habits you have, and pretty soon it will become second nature.

6. Use the Bathroom Before the Race

Portable bathrooms are not a fun place to visit on a normal day. But on racing day, in the middle of a killer run, they are even less welcome.

You could be having the run of your life, but if you have to spend a few minutes in the port-a-john during your race, you may have just kissed your PR goodbye.

Here’s the problem -- running a longer race, even a 10k, can lead to digestive problems that may require an immediate trip to the nearest toilet. Some runner’s fuel, like gels, can add to the problem because some runners don’t tolerate them well.

If you take energy gels for a 10k, consider skipping them next time. You don’t need it for a race of that distance.

Never try an untested fuel product on race day -- that’s a recipe for disaster. Stay away from ones that have upset your stomach in the past.

Do whatever you need to do to get everything out of your system before you begin your race, and don’t eat anything but tried-and-true race day foods on the morning of your big run.

7. Don’t Go Out With All Guns Blazing

Yes, we know this is a race, so it might seem strange to hear that you shouldn’t sprint right from the start. You may have conditioned your body to do that with a 5k, but a 10k is a different beast.

If you run that first mile too fast, you’ll feel great about your time and you’ll think you’re on course to set a PR. The problem is that your run will go downhill from there -- and we’re not talking about the trajectory of the course.

You’ll start slowing down because you’ve done too much too soon. You’ll have exhausted yourself when you still have five miles to go.

Instead, you need to pace yourself and enter your 10k with a solid plan. Figure out at what point you should amp up your speed, and how long you can hold it. Then make that move at the end of the race, not the beginning.

8. Throw in Some Hill Work

You’re winded and it feels like torture, especially if you’re doing hill sprints. But, even though it might not be your idea of a good time, it’s definitely upping your running game.

Hills are a great way to increase speed and endurance. They help build up your leg muscle, which is a good thing for runners.

So next time you see a hill coming your way, don’t go the opposite direction. Face it, tough it out, and know you’re getting stronger and faster with each labored step.

9. Fight the Battle of the Bulge

Nothing can slow you down while running more than carrying extra weight. It makes the run harder and hinders your time.

Drop a few unwanted pounds to speed up your time. Your weight definitely impacts your running time.

Although everyone is different, generally speaking, for every 10 pounds you lose, you can run each mile about 20 seconds faster. So if you lose 10 pounds by race day, you could lower your 10k time by just over 2 minutes.

If you are already underweight or at the lower end of a healthy weight, don’t try to lose more. You might make yourself slower instead.

Try other methods first -- you don’t want to make yourself unhealthy in your quest to be faster.

Remember You’re a Work in Progress

Just remember Rome wasn’t built in a day. If you have a true desire to get faster and you’re willing to put in the work, you’ll get there.

Focus on these tips, and don’t be discouraged if your progress doesn’t show right away. Don’t sweat things too much while you’re working up your daily sweat.

Every run is a battle, and if you enter enough battles armed and ready to go, you’ll eventually win your war. Envision yourself reaching your goal and make it happen.