You’ve worked and trained and dreamed about completing a big half-marathon or full-marathon race.  You’ve looked forward to the event for months and made your race goals and strategy.  Then when race day comes, something goes wrong!  Your pace isn’t quite there, or its turns out to be a tougher course than you expected.

At the end, you get a time much slower than you expected, and its devastating!

Have you ever been through this experience?

Well, this just happened to me over the weekend during the Famous Idaho Potato Half-Marathon.  I’d like to share some of the thoughts I had leading up to the race, during the race, and now after the race.  Although this is somewhat personal, perhaps you will find that you relate to some of my own thoughts – especially if you’ve recently had a bad race and perhaps are even contemplating whether you should quit running altogether.

Expectations Leading Up to the Race

Leading up to the race, I was hoping to set a Personal Record in this half-marathon.  Last September, I set a PR in the half-marathon with a time of 1:40:50 at the Lake Chelan Half.  I was absolutely thrilled with that time!  This was a big jump for me, and I even placed 3rd in my age group, which made me feel even better about it.

I stayed in great shape through November of last year, and ran a 10 mile race with an average pace of 7:20 (approximately).  Then during December and January, I didn’t work as hard, but was still running 4 to 5 times a week.

In February 2013, I wanted to test where my physical abilities were after the winter “break” with the Tri-cities Half Marathon.  I was NOT expecting a PR, but just wanted to run a nice and easy pace and be within a few minutes.  I finished up with a time of 1:44 – which I was happy with.  I felt like I probably could have run close to a 1:41 if I had pushed myself that day…which meant my physical ability was still pretty close to what it was from Sept of the previous year!

So, I signed up for Boise Half Marathon with every intention of working hard and setting a personal best.  The race was on May 18th, so I had about 3 months to get into great race shape.

The question wasn’t would I set a Personal record, but by how MUCH would I beat it by.

What Happened on Race Day?

My plan was to start slow, and get slightly faster as the race progressed.  Starting out slow ensures that I don’t die at the end (supposed to).  So, I wanted to start my first couple of miles at a 7:30 pace, and that’s exactly what I did.  However, my next few miles were all supposed to be at a 7:25 pace, but instead they were closer to 7:35…what??  Well, as the race progressed, I just couldn’t seem to get into my race pace of 7:20 – my legs didn’t feel like they had as much power, and I was really laboring to keep my “slower than expected pace”.

By the time I hit the half-way mark, I knew I was not going to hit my goal of 1:36:00…and this is when the mental breakdown began.  I started telling myself that if I couldn’t hit my goal, then there was no real reason to keep trying so hard.  I let my pace slip even more, and I both hated myself for letting it happen, and didn’t care at the same time.

By mile 9, I just wanted the race to be over.

Then when I hit about mile 10, I realized that I probably wasn’t even going to break my PR of 1:40:50 and this just made me have even more negative thoughts.  I started thinking about how I hated running at that very moment.  I thought, “Man, I’m no good at running anyway…why do I do this to myself?”  As people continued to pass me, this just verified in my head how bad I was at running.

I started to think that I should just quit running altogether after that race.  After all, what’s the point anyway?

Boy, I sure let some serious negative thoughts take over!!

So, what was the end result?  Well, I missed my PR by about 1 minute.  My finishing time was 1:41:43.  Yes, missing a PR by 1 minute doesn’t sound that bad, but when you are expecting to break it by 5 minutes….its a mental blow!

As much as I hate to post this, here is my mile breakdown from my Garmin watch from the race: 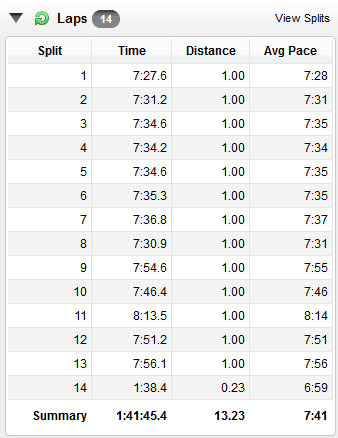 I was obviously a bit depressed after this race.  I was actually going to use this race as a measuring stick to determine if I should sign up for a full-marathon later in the year.  Sure, I still have plenty of time to train, but do I want to sign up for a race if I’m not sure I can perform well?  These are and were the thoughts going through my head immediately following my poor race performance.

I’ve continued to question whether I should continue running since the race (just a few days ago).  Sure, I know that sounds drastic.  But what if instead of spending several hours each week running, I got involved in playing other sports or other activities that were perhaps less physically and mentally challenging, and perhaps even more enjoyable?

These are all options.

However, I also have to allow myself to consider that perhaps my training wasn’t as stellar as I led myself to believe.  And in fact, its true.  I was mostly only putting in 35 to 40 miles per week and maxed out a couple of weeks around 50 miles – which obviously is plenty to finish a half marathon strong; but perhaps not enough to maximize your potential.

So, while half of me wants to hang up my running shoes for a while, the other half of me wants to get back out there and train longer miles and developer a better training program to see what my old body can really do.  Have you ever felt like that?  Like you could go one way or another?

This is where I stand now.  I haven’t been running since my disappointing race, and I’m still figuring out what I’m going to do about it.  So, this blog post is somewhat therapeutic :).

Looking at the Big Picture

In a way, its funny the mental games we play with ourselves.  If I had gotten 1:41:43 in a half marathon exactly one year ago, I would have been ECSTATIC!  But now, with what I felt should have been a big PR for me – its making me wonder about my running future.

However, as I look at the big picture, its not like my race time was bad really.  In fact, I still finished in the top 12% of all runners in this particular race.  Apparently beating out 88% of people isn’t good enough for me.  (Really, I’m not concerned with place so much as beating my own times).  Here’s my finishing stats:

Will I be able to overcome what felt like a crushing defeat (to me)?  I don’t know.  I’m still debating what I’m going to do.  But I can tell you that I am already contemplating what I could likely do if I stepped up the weekly mileage, and put together a more rigorous training schedule.  I have no doubt that I if I trained like I know I should, I could hit a 1:36 in a half-marathon – and perhaps break my PR in a full marathon of 3:37.

But is this what I want to do?

I think my friend Stephen had some great advice on what to do after a bad race, his recent post made 5 great points that I think are very applicable.  He said:

Well, I have yet to sign up for another race, but I’ve covered the other 4 points here :).  The reality is that I have set some serious goals for myself here, and in order to accomplish those, I need to continue running.  So, if I want to accomplish my goals, I’ll have to dig deep and get over this mental set back.

Time will tell.  Stick around to see what happens.

I would love to hear you thoughts, comments, or questions in regards to not only my own situation, but any bad races you may have had and how you dealt with them.

27 thoughts on “Should I Quit Running? Mentally Dealing with a Bad Race Result”