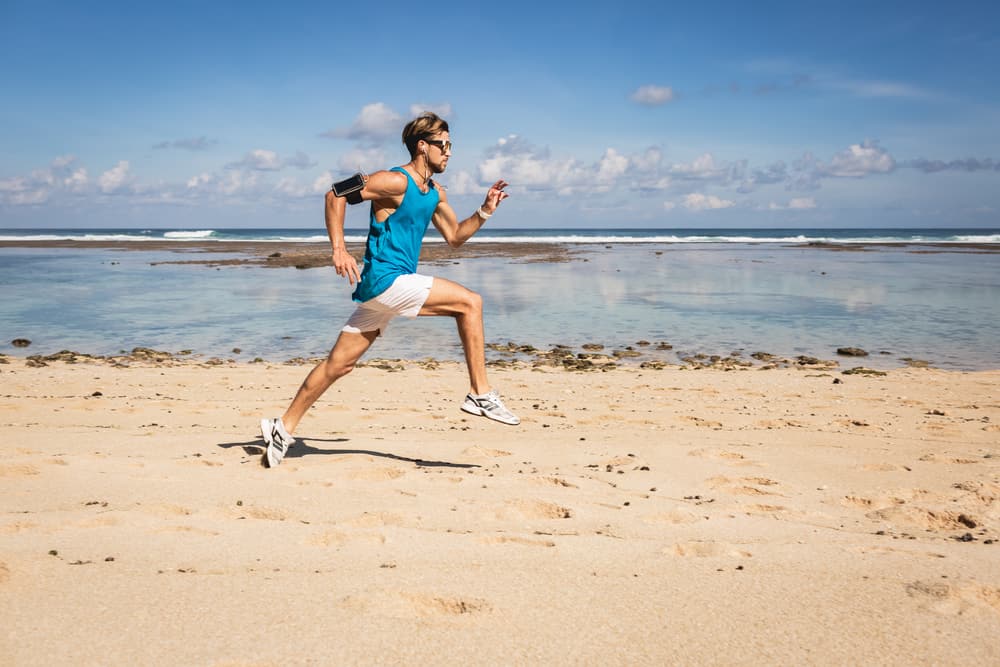 How Many Calories Do You Burn Running for an Hour

There’s nothing quite like the feeling of finishing an hour-long run; it’s just as exhausting as it is exhilarating!

Hour-long runs comfortably fall in between beginner and professional-level training, making it a fantastic workout to improve your endurance without putting in too much effort or raising your heart rate.

But have you ever wondered about the calories you’re losing on your hour-long runs?

You’ve probably heard that running one mile burns 100 calories, but how many calories do you burn running for an hour?

In this article, we’ll discuss just How Many Calories Do You Burn Running for an Hour, including the factors that can affect it and how to properly calculate it. 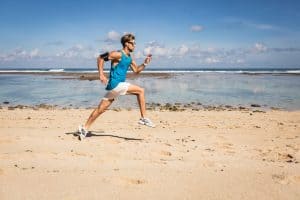 How Many Calories Do You Burn Running for an Hour?

The number of calories you can burn when running for an hour depends on multiple factors, including weight, the intensity of the activity performed, and body composition among other things.

In general, though, running for an hour burns anywhere between 590 to 1267 calories.

Here’s a brief breakdown of calories burned per hour depending on the body weight:

How to Calculate Calories Burned Per Weight

The globally accepted method of estimating calorie burn is through the MET formula.

The MET, short for Metabolic Equivalent for Task, is a conversion of how much oxygen the body consumes per minute.

In this measurement, a liter of oxygen translates to approximately five calories of energy.

Oxygen consumption increases linearly with the intensity of an exercise. For this reason, the MET measurement of running depends on how much effort you’re exerting on the run.

It can be anywhere between 3.5 METs to 12.5 METs. You can find the exact MET figure by going through the MET values given by the American Council on Exercise.

Once you have the MET value of your chosen activity, use the following equation: Calories Burned per Minute = Time × MET × Body Weight (in kilograms) / 200

Using this figure, we can estimate that the calories burned by a 140-pound person running for an hour are as follows:

It’s important to note that these estimates are semi-accurate at best. The accuracy of this calculation heavily depends on the standard MET of the activity, which can differ from person to person.

It also assumes that the activity is performed at a constant rate; i.e., one full hour of running, without breaks in between to rest, chat, etc.

As such, use these calculations only as a guide. The results are almost always an overestimation of the calories burned.

The same is said if you’re using a tech gadget to track calories. Your watch may say you’ve burned 2,200 calories, but in reality, you might have only burned 600.

There’s no real way to track calories lost and consumed other than being mindful of your activities and what you eat. 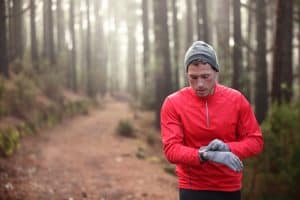 There’s no single answer to how many calories a person burns running for an hour because it really depends on multiple factors. These include:

Perhaps the biggest factor that dictates the calories burned is bodyweight.

For starters, the more weight you’re carrying, the more effort you have to exert to move it. This means that the higher the weight, the more calories burned per single session.

The faster and more intense your runs are, the more oxygen your body consumes.

The added oxygen not only speeds up your blood flow but also lowers your blood pressure. This change in blood flow increases your metabolism and, in turn, burns more calories.

With that said, you don’t always have to run fast to burn more calories.

A person with more muscle burns more calories than a person with less muscle but the same weight. This is because fat tissue doesn’t burn as many calories as fat tissue.

It makes sense if you think about it: to support the rate at which your muscles are contracting, the body produces more energy by burning more calories. So if you want to increase your calorie burn, it’s a good idea to add strength training alongside your weekly runs.

Men tend to be larger than women, so it isn’t a surprise that they burn more calories.

According to performance coach Kyle Gonzalez, males burn around 5 to 10% more calories than females at rest. This figure only increases during active exercise.

Furthermore, women need more body fat than men to support health, as stated by the American Council on Exercise.

This might seem a bit surprising, but pros actually burn fewer calories than newbies.

As the body adapts to training, it’ll perform workouts and exercises with less strain. The body becomes more efficient in storing energy, so it won’t burn as much fat.

Beginners don’t have that luxury just yet; until their bodies adapt to their workout routine, they’ll burn a significant amount of calories. 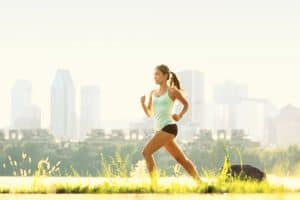 Tips to Follow When Running an Hour a Day

There are numerous tips and tricks on how to effectively boost your calorie burn during your hour-long runs. Here are some tips to follow:

Gradually Build Up to It

Running for an hour takes patience, endurance, and dedication. You can’t get into it without prior preparation, lest you work yourself to the bone or injure yourself.

Start off with 20-minute walk-runs and gradually increase the time spent running by about 5 to 10% every week.

Create a training schedule and stick to it as close as you can. You’ll make progress way faster than you might’ve initially expected, and before you know it, one-hour runs will become a daily thing for you.

Here’s an example of a four-week training plan to give you an idea of how to gradually increase your running duration:

Create a schedule that suits you and stick to it as close as you can. Treat it like an important meeting or appointment that you can’t miss. Be consistent with your schedule and try not to cancel the run if you can help it.

You can skip training once or twice a month—but don’t make it a habit!

The body automatically converts food into energy. However, it’s your responsibility to feed your body the right kind of food to convert.

A runner’s diet differs from a non-runner’s diet. Runners need to be at peak performance during a workout or a race to maintain good health and efficient calorie burn.

Carbs are among the best sources of energy for runners. On average, they should consist of 60% to 65% of a runner’s total calorie intake.

Protein is extremely important, as well; it should consist of 10% to 35% of a runner’s daily intake.

Athletes and runners need more protein than sedentary individuals and should consume at least half a gram of protein per pound of weight a day.

However, select your protein wisely; consume sources that are low in cholesterol and fat, like:

Finally, replace sugary, high-calorie drinks and energy bars with healthy low-calorie alternatives. Gatorade and Peanut Butter Clif Bars may provide a boost in energy during your runs, but they don’t help with weight loss.

Instead, replace them with coconut water (high in electrolytes), pineapple (low calorie, rich in nutrients), and banana (contains fiber, which keeps you full).

Running for an hour can be exhausting, especially if you’re not used to it. For this reason, you need to keep yourself cool and hydrated.

Beginners often forget to drink enough water during their runs, especially in the morning, leaving them exhausted halfway through the exercise.

Don’t be like that! Drink water regularly throughout the day, not just during your runs, and practice hydrating while on long runs.

Hydration bottles come in handy for this very reason—instead of returning to your starting point every time you’re thirsty, you can just simply pull out a water bottle from your belt and drink on the go.

On average, you should drink anywhere between 10 fluid ounces to 25 fluid ounces per hour when exercising. That’s around 5 to 10 fluid ounces every 20 to 30 minutes. Post hydration is just as important, but don’t overdo it or you might get stomach cramps.

Here’s a short guideline to follow when drinking water:

Plan and Prepare Your Meals In Advance

Hour-long daily runs take a lot of your energy, especially if they were recently just added to your routine. Sometimes, you won’t have the time or energy to prepare a full meal, forcing you to eat small meals throughout the day or ordering out.

You want to avoid this. Plan and prepare your meals in advance so you won’t resort to takeouts and snacks.

Before every new week starts, go to the grocery store and buy everything you need for your daily breakfast, lunch, and dinner. Make a meal plan and prep the more time-consuming meals beforehand. 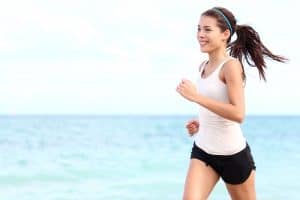 How Many Miles Does an Hour-Long Run Cover?

If it’s your first time attempting to run for an hour, the distance you’ve covered shouldn’t matter much. Your goal here is to run for a full hour, not to run 5, 10, or 15 miles an hour.

Keep an easy pace until you reach the one-hour mark. This way, you’ll be able to gauge your comfortable running pace.

With that said, an average runner can cover around 6 to 7 miles in one hour without stopping, with some going as far as 10 miles per hour.

The world record for the furthest a person has run was set by Mohamed Farah on the 4th of September 2020, covering a distance of 13.25 miles an hour.

Here’s a brief breakdown of how many miles you’ll cover depending on your running speed:

The answer to the question, “how many calories do you burn running for an hour?” differs from person to person. It all depends on your weight, training intensity, speed, fitness level, and sex among other things.

On average, though, running for an hour burns anywhere between 590 to 1267 calories.