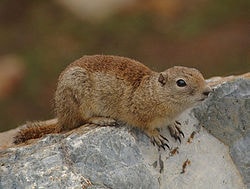 On May 18, 2013 I ran the Sage Rat Run 12K in Prosser, WA and set a personal record!  Ok, that is not really saying much since I have never run a 12K race in my life.  All I had to do was cross the finish line alive and this race would have sat alone at the top of my 12K personal record list.

This was the first year I have run the Sage Rat Run and you know it was a very nice event.  I wish there were more like it in the Tri-Cities, WA area.  The whole event consists of a number of different races including a kids race, 5K, 12K, and half-marathon on Saturday and a 15K and 50K ultra marathon on Sunday (trail races referred to as the Dirty Rat Run).

2013 was the first year for the 15K and 50K but the other races have been going on for a few years now and based on what I have seen, is starting to turn into quite a nice set of races.  They were well run, had a great atmosphere and did all of the little things that make a quality race experience.

What the Heck is a Sage Rat Anyway?

I grew up in the Tri-Cities, WA and I had never heard of a Sage Rat before this event and not only are they real, I actually saw one at the start of the 12K race.  Seriously, I was going to throw away a water bottle before the start and there he sat staring at me before jumping down his hole.  I actually view this as my greatest accomplishment from the day.

A Sage Rat is a name for the Townsend’s Ground Squirrel that typically lives on mountains in the Western United States.  The ground squirrel prefers to live at higher altitudes, occurring in alpine and sub-alpine meadows though it is also found in sagebrush flats, brush/grass habitats and cultivated areas such as the Columbia Basin of Washington State.

As you would imagine the race course varies depending on the distance of the particular event that you are running.  The half-marathon runs from Sunnyside to Prosser along the Lower Yakima Recreational Pathway.  The 12K also runs along this path stating in Grandview and finishing at the Prosser Chamber of Commerce.

The race website has a great description of the race course:

“People have asked if it is a scenic run, citing such examples as the Columbia Gorge, Leavenworth and Canyon Marathons.  All we can do is laugh and say, “It’s not even close.”  The Pathway is paralleled on either side by Interstate 82 and Highway 12.  It has it’s fair share of tumbleweeds, puncture-vine and an abundance of Black-billed Magpies just waiting for you to collapse.” (http://www.sageratrun.com/Path_Info.html)

That is a pretty humorous description of the course but really it is not that bad.  Sure there were a few times when a truck hit the warning strips along the side of the interstate and got my attention but I actually liked the course.

They did a great job of keeping the course safe and had police directing traffic at every location where the path crossed the road.

You would think the course is flat but it is sort of deceptive as it has a subtle hill along the way.  The last 5K or so as you come into the Prosser area is a nice gradual downhill so you finish fast but do not thrash yourself.

The race organizers did a great job of turning this race into an event the spread over several days.  This year they had Tara Costa from Season 7 of the Biggest Looser come and provide some motivation to the runners before running the 5K herself (she also did the 15K on Sunday).

On Friday evening Tara spoke at a fundraising pasta dinner before the race.  I did not make it there as I was too busy eating fried chicken and candy with my family back home.  I know, awesome pre-race meal.

At the start of the 12K Tara provided some inspirational words to the runners.  She spoke a little about her time on the Biggest Looser, what made her decide to change her life, and what we can do to take control of our lives.

It was funny to note that after Tara gave the microphone back to the race official, he reminded us that our bibs included a coupon for a free piece of pizza at the finish and that we were all entitled to a free donut from Bill’s Berry Farm as well.  All awesome perks to the race but the timing was humorous.

The weather on Saturday morning was warm and fairly nice.  There was a small breeze acting against you most of the way but it was nothing of any tangible note.

The temperature was just fine but the sun was pretty intense and made it seem a lot warmer than it actually was.  I found myself very much valuing the water stops along the way.  The sun is just something you have to get used to running in the Columbia Basin/Yakima Valley.  Having lived in Western Washington, I will take intense sun over rain any day.

Like I noted earlier, I ran the 12K so it is the only race that I can speak with any position of authority on.  I chose to do the 12K because well, I was looking for a fun race that I would not feel compelled to push really hard in or in preparation for.  I know that sounds bad but coming off of the Boston Marathon in April I am in the down-time period where I am just looking to have some fun with running as opposed to training to a rigorous schedule and worrying about time, place, and all that.

If I had done the half-marathon, I would have been compelled to train hard as I know I would be comparing my results with previous half-marathons that I have done.  As for the 5K, well I am really bad at fast, short races at this point.  Every time I run a 5K there is usually a few high school kids that show up and completely thrash the field.  12K, never done that distance so nothing to sweat over right?

There were about 130 participants in the 12K including several that looked like they really knew what they were doing.  There was lots of good conversation between the runners as we all lined up and you could tell several of the folks knew each other from the race circuit.

I wish I could say it was a dramatic race for me but about 50 meters after the start I moved into 3rd place and stayed there the entire time.  I watched the two guys up in front of me for a couple of miles before we caught up with several of the half-marathoners on the path.  From that time forward I was running alone in the 12K not being able to see the two runners in front of me.  On a corner I peaked to see if there was anyone on my tail and there was nobody back there either.

As I approached the finish line I could see two of my daughters cheering for me on the left side of the road.  That gave me enough inspiration to finish strong (or at least to not stop and walk the last 400 meters to the finish).  After passing through a bevy of cheerleaders, I finished in a time of 47:43 which correlates to a pace of 6:23.8 miles.  Seeing as I have no idea what I am doing at this distance and I have not really trained hard since I started my Boston Marathon taper in late March I will take it.

Check out all the other race results for the Sage Rat races.

The finish area in Prosser was great.  When you crossed the finish line you were ushered through the corral where race officials placed the largest and most colorful medal I believe I have ever seen in my life around my neck.  Since I was in the top 3 in the race, I also got an extra medal which was great but was a lot smaller than the weapon of war they gave all the finishers. 🙂  Serious, I do not think this thing is going to fit in my finisher medal case.

The finish area had several booths with all sort of goodies supporting the runners.  I caught up with my family and I got my free donut so the kids could split it.  The whole thing was very family friendly and after leaving the race area, my wife made the comment that Prosser seemed like it would be a pretty cool place to be.

The bottom line is the Sage Rat run was a lot of fun.  For me personally, it was nice to have a relaxed atmosphere for a race and to be doing a race just for fun.  The race officials did this one right.  It had chip timing, a safe course with inspirational signs along the way, celebrity motivational speakers, medals the size of Buicks for all runners, post-race food and goodies, an opportunity to pay homage to a furry critter, etc.  I cannot think of anything they could have done better.  Sure there were a couple of times when I was running that I wish there was an extra water stop along the way but in the 12K we had 3 water opportunities and that is pretty reasonable.  All in all, I would do this one again next year and judging by the increasing numbers and the locations from where the participants are coming, this secret is getting out.