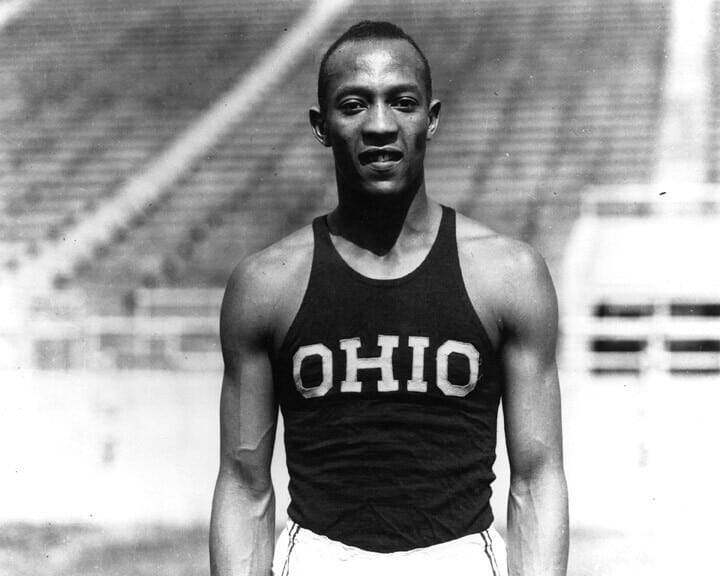 Not only that; he equaled the world record in the 100-yard dash, and broke three world records in the 220-yard low hurdles, dash, and the running broad jump.

If you haven’t seen the movie, you’re seriously missing out. Watch the movie ASAP, even if you’re not a big fan of sports!

Who Is Jesse Owens?

His victories were quite significant at the time, as they effectively disproved Adolf Hitler’s views on Aryan superiority.

For this reason, Jesse Owens is often dubbed as the man who went against Adolf Hitler.

Even before he’d broken the records, Jesse Owens’ sports prowess was irrefutable. In fact, while he was attending college at Ohio State University, he was known as “The Buckeye Bullet,” in reference to his speed.

If we had to list all of Jesse Owens’ awards, we’d be here all day. The title “greatest athlete of all time” rings true. Indeed, there was nothing Jesse Owens couldn’t do in the field. He made a lasting impression on the world, and still remains an American hero in the United States.

What Is the Jesse Owens Movie “Race” All About?

Directed by Stephen Hopkins and written by Anna Waterhouse and Joe Shrapnel, Race, a 2016 movie, is based on true-to-life events of black athlete Jesse Owens and his quest to become the best track-and-field athlete the world has ever seen.

After having won multiple awards in college, Jesse Owens caught the attention of Ohio State University coach Larry Snyder. After much debate with the US Olympic Committee, Jesse Owens was given the opportunity to participate in the 1936 Olympics, where he faced off against Adolf Hitler’s vision of Aryan supremacy.

In preparation for the Olympics, Jesse Owens didn’t only face racial bigotry and scorn, but also the weight of his family and community’s expectations, as well as his own high standards for competition. Furthermore, this all happened during Depression-era America, where barely anyone had enough to eat, much less Owens’ poverty-stricken family.

In the end, the track doesn’t judge participants based on the color of their skin or their status in society. And Jesse, with his hyper-focused determination, is already a winner.

Reasons Why You Absolutely Need to Watch Race, The Jesse Owens Movie

Race has had its fair share of criticism over the years, some of which are valid.

The 7.1/10 IMDB rating speaks for itself; while it isn’t a bad movie—far from it—the movie does take some mysterious, and some might even say questionable, liberties with the facts.

Still, it’s undeniably a beautiful movie. There’s little to complain about with its acting and cinematography. Plus, it has a heart-thumping soundtrack.

Here are my top reasons why you should watch the Jesse Owens movie Race right now (or after reading this article).

Celebrates the Power and Influence of One Man

Set in the 1930s, Race presents the injustices and unequal treatment of Black people during the Jim Crow era. But despite the Olympic-sized challenges Jesse Owens faced throughout the movie, he never faltered. Instead, he pushed on and on, demonstrating the impact and power of a man with one clear goal in his mind: become the best that ever lived.

The movie doesn’t warp Jesse Owens into some kind of superhuman who was born with talent. In fact, it quite clearly portrays Owens’ very human struggles, pain, and hard work.

Stephan James, the actor who played Jesse Owens, mentioned that he didn’t know a lot of Jesse when he first received the script. He certainly knew of him, but he never had the chance to learn more than just his achievements in the Berlin Olympic Games.

After delving deeper into Owens’ history, Stephan James quickly realized that his story went much deeper than just being a great athlete. The movie celebrates James Owens as he is: a man who proved an entire nation wrong.

True-to-life movies often bend the truth for the sake of drama and entertainment. But Jesse Owens’ life doesn’t need that extra bit of “spice” to become entertaining.

For the sake of authenticity, the movie was made in consultation with Jesse Owens’ three children: Gloria Owens Hemphill, who was four when her father completed the Olympics, Marlene Owens Rankin, and Beverly Owens Prather.

“From the very beginning, we were involved,” said Marlene Owens Rankin, when she was interviewed by TMZ. “We even had script approval, by our request.”

On top of that, some of the more crucial sequences of the Olympics were shot in the Olympiastadion itself, the same stadium that was built specifically for the 1936 Summer Olympics.

With that said, I’d be remiss if I didn’t mention some of the more “controversial” takes on the realism of the movie.

According to American film critic Stephanie Zacharek, Race turned racism into a major character instead of it only being a key component.

“Race presents Owens as a man who lets events shape him, but that can’t be farther from the truth,” she said. “It undermines his powerful achievements.”

There was also talk about the portrayal of Leni Riefenstahl, who the movie portrayed as sympathetic and almost heroic. In truth, this wasn’t supported by facts at all.

Still, the movie in itself doesn’t stray far from the truth. It didn’t shy away from the more “problematic” aspects of the 1930s, an era of deep-rooted segregation in both the US and Nazi Germany. 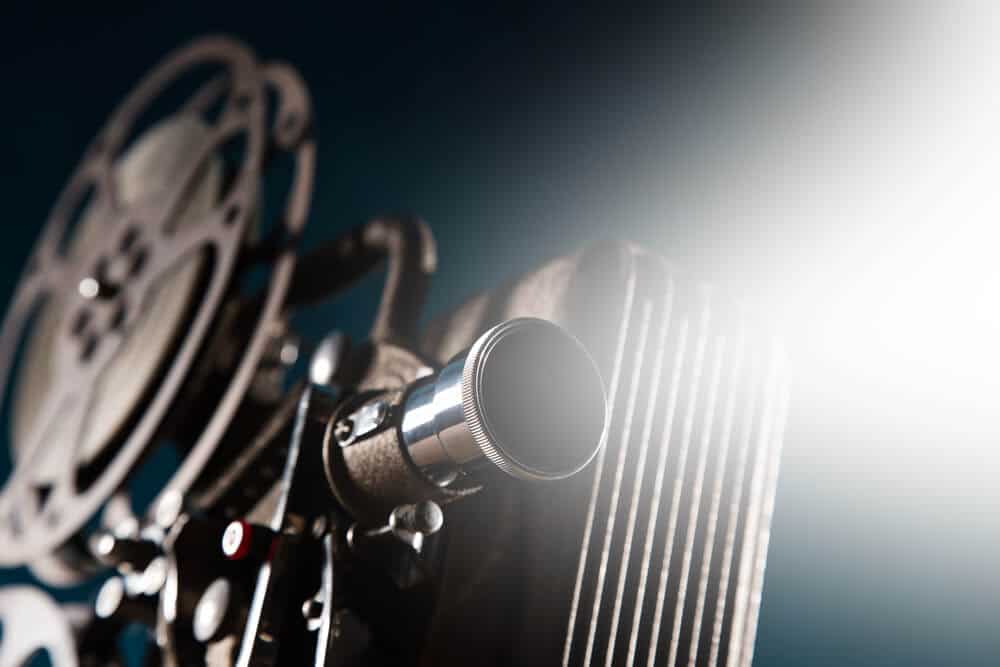 The movie wouldn’t have been big as it was today without its top-tier acting and cinematography.

Race was directed by Stephen Hopkins, who had previously directed Predator 2, Nightmare on Elm Street 5, and Lost In Space. It stars Stephan James as Jesse Ownes, Jason Sudeikis as Larry Snyder (Jesse Owens’ coach), Shanice Antonette Banton as Ruth Solomon (Jesse Owens’ wife), and many others.

Stephan James, who spent numerous hours with Jesse Owens’ daughters, asking them about his life and his personality, won the Best Actor awards on the Canadian Screen.

The movie is a feast for the eyes and ears. There are some awkward moments here and there, but they don’t overshadow the main plot of the film.

Race inspires people to look beyond a person’s race, nationality, and social status.

Through perseverance and talent alone, Jesse Owens’ came out a national hero in the world of athleticism. He wasn’t born with a golden spoon or a life of privilege; quite the opposite, in fact.

Jesse Owens was, by all accounts, living in relative poverty—much like most of those who lived during The Great Depression.

Still, status and poverty didn’t stop Owens from pursuing his dreams and pushing himself way beyond anyone could’ve ever hoped. Much like real life, Jesse Owens gave everything he had in the movie.

What Is The Jesse Owens Story and How Does It Compare to Race?

Produced in 1984, The Jesse Owens Story is a two-part, four-hour biographical movie that retells the life of Jesse Owens through a series of flashbacks and interviews.

It’s shown from the perspective of a black reporter who interviewed both Owens and his coach, Larry, in the context of the investigation of tax evasions. In the movie, a suspicious sum of $10,000 was given to Owens in a political campaign.

Race details the story from Jesse Owens’ point of view, while The Jesse Owens Story is told through the eyes of a reporter years after he’s won the Berlin Olympics.

Even after Owens won the four gold medals, his life didn’t miraculously turn around. He didn’t come home to the reception expected after such a big achievement. He still had to combat segregation laws and bigotry.

The Jesse Owens Story details just that, and more; including all the good he brought into the world.

Now, do note that The Jesse Owens Story was produced in 1984 with a limited budget, so it isn’t the best in terms of cinematography. It’s still a worthy watch for Jesse Owens fans though, especially those who want to know what happened after he won the medals.

Biographies are a bit of a hit or miss, but Race nailed Jesse Owens’ story on the head.

Race isn’t only a sports movie; it’s a movie about courage, tolerance, determination, and friendship. It’s about one man’s fight to become nothing short of an Olympic legend.

It isn’t perfect, not by a long shot, but it does give viewers an emotional and impactful summarization of Jesse Owens’ life and achievements. Watch it; you won’t regret it!