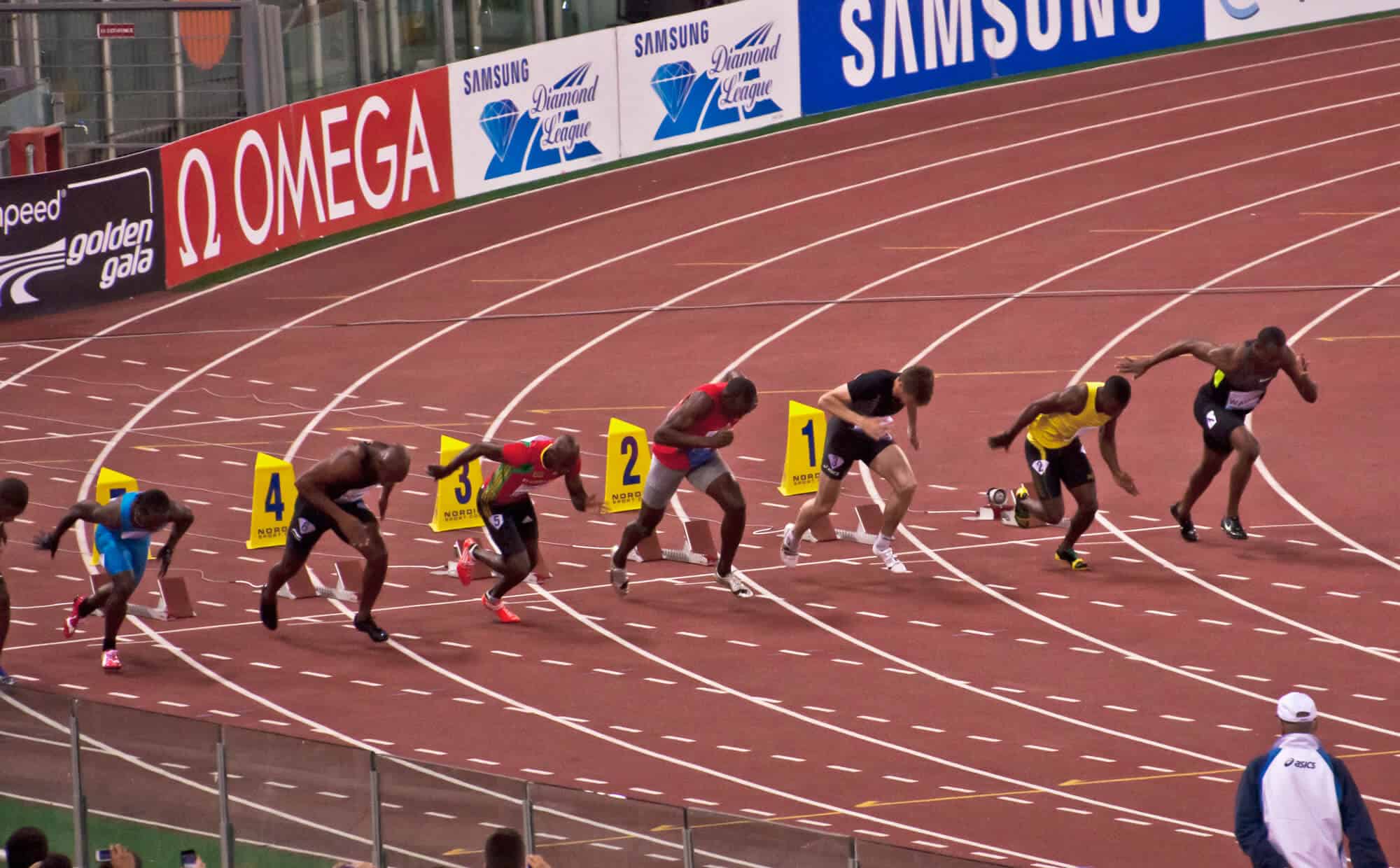 The Olympic Games is a long lost tradition that dates back to 776 B.C. in ancient Greece. However, the almost 3,000 year old event was revived when it was held for the first time in Athens, Greece on April 6th, 1896.

Since that time, a lot of runners have participated in various races in the Olympics, whether they rely on speed or endurance. However, a few Olympic runners have managed to win multiple gold medals, break records, and raise the competitive bar for years to come!

In today’s article, we’ll take a quick look at some of the most famous Olympic runners that managed to achieve remarkable success and change the game forever!

Kicking off the list with one of the most popular names in the history of the Olympic Games. Famous Olympic Runners: Sir Roger Bannister is an accomplished English long-distance runner and neurologist who failed to win a gold medal in the 1952 Olympics.

However, he changed the game forever after he managed to run a mile in under 4 minutes in 1954.

Before he broke that barrier, running a mile in under 4 minutes was considered physically impossible, but since he achieved it, a lot of runners were also able to do it, which led to what is now known as the “Roger Bannister effect”.

James Cleveland Owens, also known as “Jesse Owens” is not only an accomplished Olympic athlete, one of the Famous Olympic Runners but also an iconic African American figure. In fact, the annual award for the best track and field athletes in the USA is named after him.

In May 1935, Owens managed to set 3 new world records in track and field. He also tied with a 4th record.

Not only that, but he also managed to win 4 gold medals in the 1936 Berlin Olympic Games, which were held in Nazi Germany that portrayed ethnic Africans as lesser individuals. 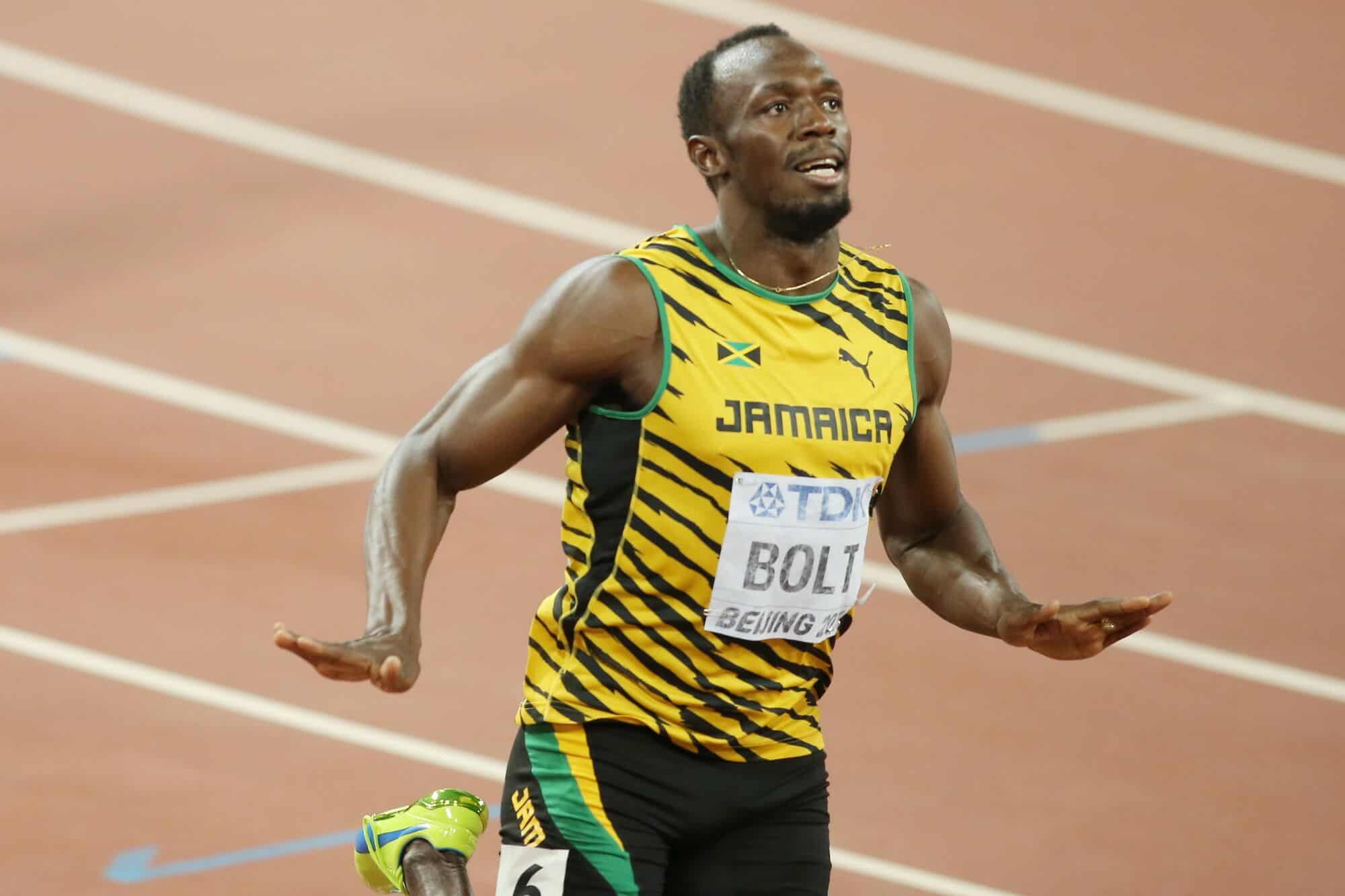 Usain Bolt, the fastest man alive, is one of the Olympic games legends who managed to make a name for himself after becoming the first runner in history to hold the world record for both the 100 meter and the 200 meter sprints, winning 2 Olympic gold medals in the process.

Not only that, but he managed to win the 2 sprint races in 3 consecutive Olympic games (2008, 2012, and 2016), earning him the nickname “Lightning Bolt” and establishing him as the greatest sprinter of all time.

In addition to this unprecedented feat, he also managed to win two 4 x 100 meter relay gold medals as well as 11 world championships throughout his career with records that nobody is capable of breaking to this day!

Paavo Nurmi was a Finnish athlete who is regarded as one of the greatest middle and long distance Olympic runners of all time.

The “Flying Finn” managed to make history by setting 22 new world records in various race distances, ranging between 1,500 and 20,000 meters!

During his running career which spanned over 14 years, he managed to win 9 gold Olympic medals and 3 silver Olympic medals, more than any other track and field athlete in the history of the Olympics.

Nurmi also managed to stay undefeated for the most part of his career, including 121 races and cross country events.

Sir Mohamed Farah is a Somali-born English athlete who is regarded as one of the most successful track and field athletes of all time and one of the Famous Olympic Runners.

Eliud Kipchoge is a Kenyan long distance runner who is widely regarded as one of the greatest marathon runners in the world. Kipchoge managed to break several world records in marathons, including the 2018 Berlin marathon with a time of 2 hours 1 minute, and 39 seconds. 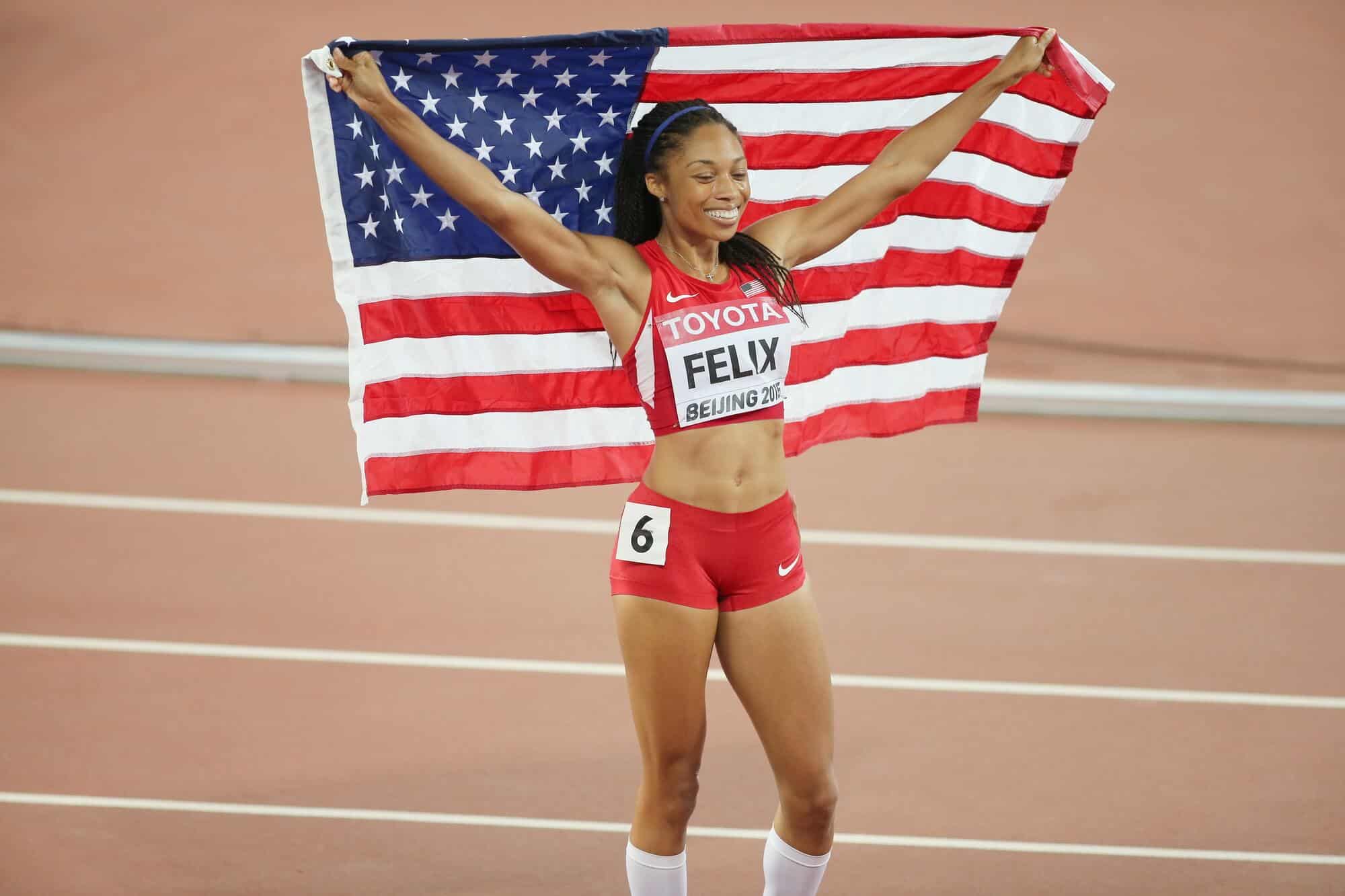 Allyson Felix is one of the most popular female track and field athletes of all time. She is mostly known for winning 3 gold medals while competing in the 2012 Olympics.

In fact, she is only the second female athlete to win 3 gold medals in the same Olympic games and the first in track and field.

In addition to her excellent performance in the 2012 Olympics, she also managed to strike gold in the 2008 Olympics in Beijing in the 4 x 400 meter relay. She currently has 7 gold medals with a total of 11 Olympic medals.

Asafa Powell is a Jamaican runner who specializes in the 100 meter sprints. He is known for reaching the finish line under 10 seconds over 88 times during his career.

Despite stirring a lot of controversy around his 2013 World Athletics Championship, he managed to win 5 gold medals in addition to winning the gold medal in the 4 x 100 relay in the 2016 Olympics.

Abebe Bikila is one of the most iconic athletes in Africa. For starters, the marathon runner is the first African and Ethiopian athlete to win a gold Olympic medal. This was in the 1960 Rome Summer Olympics that he won while running barefoot.

Despite his multiple injuries and ailments, he participated in the 1968 Olympic marathon, hoping for a third win.

However, his previous fractures lead him to drop out of the race. He had a car accident the following year that left him paralyzed for 4 years until his death.

Sebastian Coe is one of the most popular British athletes of all time. He managed to win a lot of races and competitions for over a decade, earning a lot of Olympic gold medals in the process.

He also won 2 gold medals in the 1980 and 1984 Olympic games, both in the 1,500 meter race. After his running career, he also had a successful career in politics and had a major role in winning the hosting rights of the 2012 Olympics in London.

Haile Gebrselassie is an Ethiopian long distance runner who managed to win two Olympic gold medals, both in the 10,000 meter races. Additionally, he won 4 world championships in the same race, making him one of the most successful Ethiopian runners of all time.

Additionally, Gebrselassie also won multiple marathons and half marathons consecutively, including the Dubai Marathon 3 times and the Berlin Marathon 4 times.

Famous Olympic Runners: Hicham El Guerrouj is a Moroccan middle distance runner who managed to break a lot of world records, with many of them still standing to this day!

For starters, he is the current world record holder for the fastest mile, which he managed to finish in 3 minutes and 43.13 seconds. 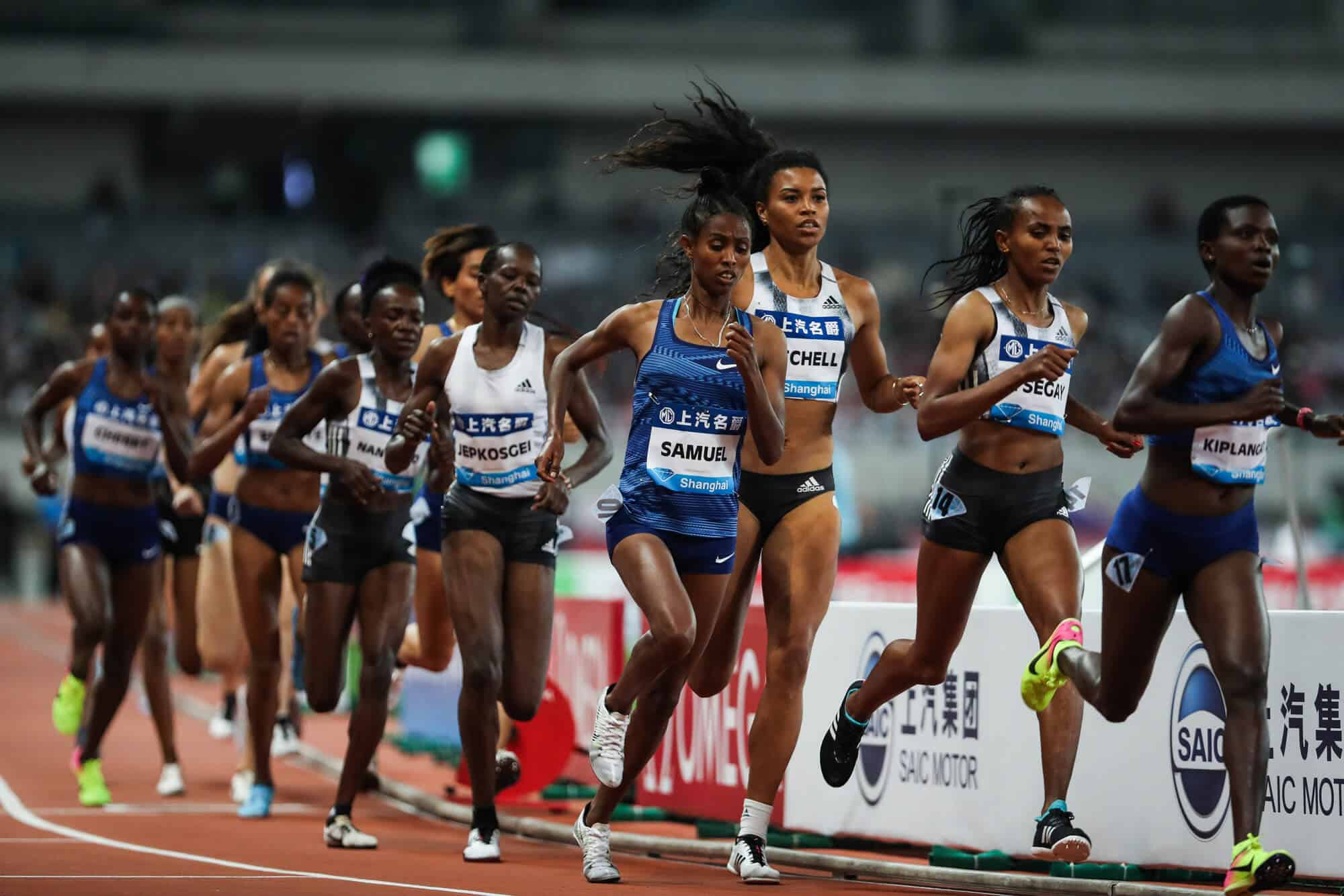 Moreover, in the 2004 Athens Olympic games, he won two gold medals in the 1,500 meter and the 5,000 meter events, a feat that nobody ever achieved since Paavo Nurmi.

The Jamaican Elaine Thompson-Herah is widely regarded as one of the greatest female runners of all time. She managed to win 5 gold medals in 2016 and the 2020 Olympic games and is currently setting her path to becoming the fastest woman of all time.

In the 2020 Olympic games, Elaine Thompson-Herah managed to break the Olympic record for the fastest 100 meter sprint in 10.61 seconds.

Widely regarded as the fastest woman in history, Florence Joyner holds the world record for the fastest 100 meter and 200 meter sprints in history, timed at 10.49 and 21.34 respectively.

Additionally, she was a co-chairwoman President’s Council on Physical Fitness and Sports from 1994 to 1998. Unfortunately, she died at the young age of 38 due to suffocation during a seizure.

Fanny Blankers-Koen is not just a track and field legend, but she’s one of the few athletes who managed to achieve all her glory while being a mother of two, which is why many people call the dutch athlete “The Flying Housewife”.

In fact, in the 1948 London Olympics, Blankers-Koen didn’t only win a single gold medal, but she actually won a staggering four!

There you have it! A brief list of the most famous Olympic runners of all time. As you can see, there have always been exceptional runners throughout history with inspirational stories that make them proof that determination and hard work will conquer any pain or obstacle along the way!