“I run because long after my footprints fade away, maybe I will have inspired a few to reject the easy path, hit the trails, put one foot in front of the other, and come to the same conclusion I did: I run because it always takes me where I want to go.” – Dean Karnazes

Inspiration has no limits. Winning that medal or reaching that goal begins with a few steps. This is what our famous track runners started with.

We’re going to have a quick peek at 19 of those famous runners and figure out what they did to deserve a spot on our list. 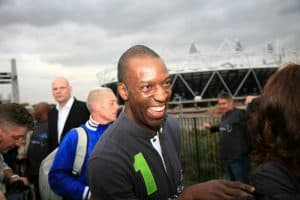 Until Jun 2017, Johnson held the world record for the fastest time to run 300 meters. He managed this incredible feat in only 30.85 seconds. His record was finally broken by Wayde van Niekerk who managed to run the 300 meters in 30.81 seconds.

In 2004, Johnson was included in the United States Hall of Fame. The 200-meter sprint he did in 1996 was listed as the best track performance in the past 25 years.

She is the first female athlete to win three gold medals in one Olympics since 1988.

When Pre was only 19, he was featured on the Sports Illustrated magazine cover.

Ben Johnson held the world’s fastest man title from 1987 until 1988 by breaking the 100m and 60m indoor sprinting World Records.

He managed to win two bronze medals at the 1984 Summer Games. Only one year later, he won gold at the 1985 World Indoor Championships. He got gold again in the 1986 Goodwill and Commonwealth Games.

In the 1987 World Championships, Ben won a gold medal in the 100m sprint. He took home the gold medal again in the 1988 Summer Olympics.

Unfortunately, his medals were taken away because he doped himself with stanozolol. 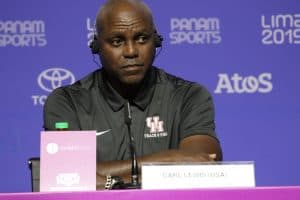 Carl Lewis managed to win 17 gold medals in his career. 9 of these medals were Olympic while the other 8 were acquired from World Championships.

Between 1982 and 1984, this world champion was named the Athlete of the year by Track & Field News. Additionally, the International Olympic Committee voted him to be the Sportsman of the Century.

In 1988, Lewis won his only silver medal. His running career ended in 1996 when he won his last long jump Olympic event which gave him his 4th consecutive gold medal.

Florence Griffith Joyner is considered to be the fastest woman to exist. Until the time of writing this article, she still holds the World Record for the 100m and 200m sprints.

Florence set those two World Records in the 1988 Olympic Games in Seoul, South Korea. She took gold medals from both of these events and added a third gold by winning the 4 x 100-meter relay.

Unfortunately, we lost Florence because of an epileptic seizure in 1998. She passed away at the young age of 38.

In 1936, the Nazis considered ethnic Africans an inferior race. Jess Owen managed to prove otherwise when she won four gold medals in the 1936 Berlin Olympics.

Additionally, Owen set three track world records on May 25th, 1935; furtherly proving that there’s no such a thing as a lesser individual.

To honor his legacy, The USA named the track athlete’s highest honor after him.

Wilma Rudolph is an American Olympic medalist who caught the world’s eye when she shined in the 1956 and 1960 Olympic games.

Her stellar performance in the 100 and 200m individual events, as well as the 4 x 100-meter relay, earned her three gold medals in the 1960 SUmmer Olympics in Rome, Italy.

In addition to the 3 golds, she was also considered the fastest woman alive in the same year. She became the first American woman to earn three golds in one Olympic Games.

After 1960, she was considered an icon and an international star who got the same media coverage as famous athletes like Muhammad Ali.

Sydney Michelle is an American sprinter and hurdler. Her talent shines the most during 400-meter hurdles.

She won two gold medals at the 2019 World Championships and Tokyo Games.

At the 2020 USA Olympic trials, she became the first woman to finish the 400-meter hurdles in less than 52 seconds. Mclaughlin managed to do it in 51.90 seconds.

Shortly after, In the 2020 Tokyo Olympics, she won a gold medal and set a world record of 51.46 seconds. This record hasn’t been broken yet.

Athing Mu won her first gold medal at the 2020 Tokyo Olympics when she beat the national record set by Ajee Wilson in 2017. She managed to secure another gold medal in the 4 x 400 m relay.

Her 1 minute and 23.57 seconds is the fastest time run by an American woman. 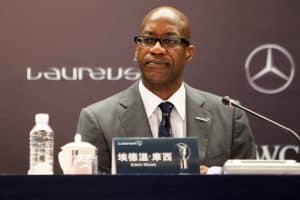 A world-class track and field athlete, Edwin Corley Moses is best known for winning 107 consecutive finals between 1977 and 1987.

Moses was also a reformer in Olympic eligibility and drug testing. Because of that, he was elected the Chairman of the Laureus World Sports Academy in 2000.

Sebastian Coe’s career in both running and politics was the main reason why London was chosen to host the 2012 Olympics.

Dean Karnazes is arguably the best ultra-marathon runner out there. He’s best known for taking endurance to a whole new level.

He followed in 2006 by running 50 marathons in 50 states in 50 consecutive days. Karnazes once ran from Southern California to New York in 75 days. The man is a machine.

Abebe Bikila is the first Sub-Saharan African to win an Olympic gold medal in 1960. This Olympic champion won that medal without any shoes on!

Just 4 years later, he came home with another gold medal in Tokyo. That made him the first runner to win an Olympic marathon twice in a row.

Bikila was involved in a car accident in 1969 that left him partially paralyzed. He passed away from cerebral hemorrhage 4 years later.

Roger Banister is the first runner in the world to run a mile in under four minutes; 3 minutes and 59.4 seconds to be exact.

Around the Globe, less than 1500 runners managed to have this remarkable achievement.

Because of his 4-minute mile achievement, he became the Sports Illustrated Sportsman of the year.

Linford Christie won 24 medals in major championships; 10 of these medals were first-place awards.

Christie was the first British man to win the gold medal in the 100-meter race in the Olympic Games, European Championships, Commonwealth Games, and World Championships.

Because of this, he’s considered to be the best male runner in the history of Great Britain.

However, Asafa is best known for finishing the 100-meter race 97 times in less than 10 seconds.

Until his retirement in 2016, Powell had managed to win 5 World Athletics gold medals.

Some people believe that Hesham El Guerrouj is the best middle-distance runner. This Olympic athlete still holds the world record for the 1500 meter, mile, and 2000 meter outdoor events.

His incredible achievements earned him the nickname “King of the Mile”

Usain Bolt to runners is like Michael Phelps to swimmers. You don’t need to be interested in running to know Usain Bolt.

Usain Bolt is considered the fastest person alive and he was nicknamed “Lightning Bolt.” He was also named the Athlete of the Year 4 times by the International Association of Athletes Federations.

Those were 19 of the best track runners to ever participate in championships. They have different origins, different achievements, and different goals.

However, one thing they all have in common is that they never gave up. Every single one of these athletes kept pushing until they wrote their names in history.