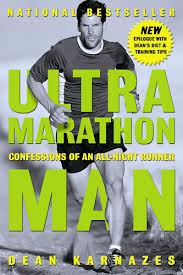 While I was on a recen t business trip I had the opportunity to finish Dean Karnazes’ book Ultramarathon Man: Confession of an All-Night Runner.  In all I thought the book was ok but not what I would call great.

I have to put some of this in context as I have read Christopher McDougall’s Born to Run at least two times and absolutely loved it.  Each time I read Born to Run I felt inspired to get out there and hit the paths with renewed vigor.

The first time I read Born to Run I promptly signed up for my first ultra-marathon (a local 50K) while I was still under the influence of the running euphoria the book created within me.  I have long been interested in finding another book out there that gave me that same inspiration about running – one that uplifts and inspires us to we can achieve the tough to be impossible if we try just a little bit harder.

So be fair to Dean, he had some big expectations to fill when it came to his first book.  Dean Karnazes has a bit of a reputation of being an attention seeker in a sport that is dominated by those who view it more as a means for personal reflection and camaraderie than competition.

Ultra-runners are a different breed than your standard fun run folks or even you hard core road marathoners.  Most ultra-runners would prefer to dodge the spotlight and structure that comes with mainstream running and trade it for the solace and enlightenment that comes with this non-mainstream sport.

I really did enjoy the book at first, particularly Chapter 4 where I found a lot of parallels between Dean’s life and running and my own.  Like Dean, I also had about a 15 year break from running before returning to the sport in my 30s and really for some of the same reasons he cites.

I did enjoy the chapters about his 1st Western States 100 but unlike Born to Run where I could not wait to jump into the ultra-marathon community and run my first 50k, Dean left me leery whether true ultra-running is really something I would ever want to or even could get involved with long-term and still maintain a necessary focus on the other more important aspects of life.

There were some very touching moments in the book when he talked about his sister who passed away when she was a late teen or when he offered a glimpse into the support that his mother and father would provide during many of his races.  Heck, I am not even sure my parents know I run let alone would be out crewing for me during an extreme race.  The races Dean ran in an effort to sponsor children in need were also compelling and if you could not be touched just a bit you probably need to call a priest because you have no soul. 🙂

The problem was, I could not really understand what he was trying to accomplish with both his book and his continuing escalation of events.  Speaking as one who also tends to deal in extremes myself, I somewhat get where he is coming from with some of it but I was left more with a picture of someone who was more interested in trying to convince you that he is extreme rather than providing a vision and a light for the sport of ultra-marathoning.

There was a lot self-promotion in the book as you might expect since it is well a book about his life as an ultra runner but it sort of crossed the line at a few points when he basically reflected upon himself in god-like terms.  People like that are just not for me and well, if I was starting an “ultra running” team, there are a lot of better runners out there in the ultra community that I would spend my draft pick on before Dean’s name came up.  It gave all sort of gave a bit of a glimpse into the reasons why Dean Karnazes has such a reputation in the ultra community as a boorish self-promoter and it kind of turns you off.

If you like books about running this one is fine and you will be able to pull out a couple of nuggets to incorporate into your own portfolio but if you are looking for inspiration to take your own running a new and more extreme direction, there are better options out there.

I do admire Dean and there are many areas where I can very much relate to his story on but in the end found myself looking for and wanting just a bit more.