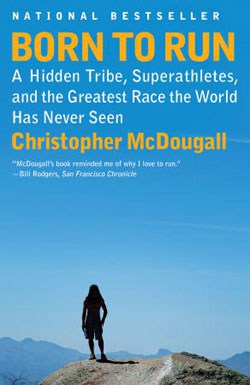 I read the book Born to Run: A Hidden Tribe, Superathletes, and the Greatest Race the World Has Never Seen

a couple of years ago, and STILL think about it from time to time.  Why has Born to Run struck a nerve with so many people, and why is it flying off the shelves on Amazon.com and other book stores?

Well, there really is a ridiculously simple reason that many authors can learn from (which I will get to in a minute).  Overall the book is well written and it tells a great story (but that’s not the reason).

Here is what Scott Dunlap over at Trail Runner’s Blog had to say:

I just finished the audiobook on my iPod (expertly told by Patrick Lawlor), and all of the facts and characters are still swimming around in my head. Chris really did a phenomenal job of combining the history and unique lifeview of the Tarahumara indians, the experience of ultrarunning, the conspiracy of the multi-billion dollar running shoe industry, his personal experience fixing injuries with barefoot running, ultrarunning characters like Ann Trason, Scott Jurek, Barefoot Ted, Luis Escobar, the crazy antics of Jenn Shelton and Billy Burnett, all cumulating in “the greatest race the world has never seen”. Chris is a total pro, and each chapter is packed full of facts, quotes, and antics that will get you laughing, thinking, and inspired to run. I think it’s one of the best running books I have ever read.

But not everyone has good things to say about the book.  In fact, because the book paints a grand picture of connecting with your roots and running barefoot, more and more people are trying out running barefoot.  This could actually be causing more foot and running injuries some claim.

Herald-Review.com has this to say:

“As more avid runners and casual athletes experiment with barefoot running, doctors say they are treating injuries ranging from pulled calf muscles to Achilles tendinitis to metatarsal stress fractures, mainly in people who ramped up too fast. In serious cases, they are laid up for several months.

Many converts were inspired by Christopher McDougall’s 2009 best-seller “Born To Run,” widely credited with sparking the barefoot running trend in the Western world. The book focuses on an Indian tribe in Mexico whose members run long distances without pain in little more than sandals.

While the ranks of people running barefoot or in “barefoot running shoes” have grown in recent years, they still represent the minority of runners. Some devotees swear they are less prone to injuries after kicking off their athletic shoes though there’s no evidence that barefoot runners suffer fewer problems.

In some cases, foot specialists are noticing injuries arising from the switch to barefoot, which uses different muscles. Shod runners tend to have a longer stride and land on their heel compared with barefoot runners, who are more likely to have a shorter stride and land on the midfoot or forefoot. Injuries can occur when people transition too fast and put too much pressure on their calf and foot muscles, or don’t shorten their stride and end up landing on their heel with no padding.”

Despite this fact, the book may have more to offer than just a review of barefoot running.  In fact, anyone that has read the book knows that it doesn’t encourage you to run barefoot.  Its a great story in its own right, but it also inspires to run and has many other deeper lessons.  Here is what Khalled Alen at Warrior Spirit found in the book:

“On its surface, Christopher McDougall’s book is the modern story of the Tarahumara, a tribe of Mexican Indians living in one of the most remote locations on earth. They call themselves the running people because their culture is held together by their tradition of running for miles and miles and miles. They are, by all accounts, some of the greatest distance runners in the world.

McDougall tells the story of how they were initially noticed by the ultra-running world, brought to the states to run the Leadville 100, one of the most brutal ultra-marathons in the world, and eventually faded from glory because of their unwillingness to be used for profit or to themselves run for fame and glory. That’s the backstory. The book then picks up in the modern day and follows the efforts of Caballo Blanco, a gringo-turned running-man, to organize a race to show the world how great the Tarahumara can be on their home turf. A chance meeting between the author and Caballo Blanco leads to the recuirtment of the top ultra-runners in the states, who head down to test their luck against the running people.

Along the way, McDougall reveals all sorts of mind-blowing research and developments in the running world. Running in shoes in bad for your joints and knees. Modern running shoe technology was developed by Nike with no scientific input. Humans were designed to run long distances more efficiently and faster than any other animal, even using this ability to chase our prey to the point of heat exhaustion. Smiling makes you run faster.”

Personally, I think if you are looking for something that will keep you motivated to train for your marathon, you need to pick up this book.  But this takes us back to why is it KILLING it on Amazon?  After all, its been on the overall top 100 best sellers list of over 2 years now!  The answer: copywriting!

Chris has down an amazing job of finding the write copy to both inspire, intrigue, and leave us wanting more.  All of this is captured brilliantly in the title and subtitle visible on the front cover.  The author only has a few seconds to “sell” a book, and Chris has done this brilliantly by making us want to connect with our “innate” (born with it) abilities, and yet leave the intrigue of some “hidden” story that has been going on forever that somehow we never know about.  I mean the “greatest” race ever!

So, yes, the book is good – but the copywriting on the cover is BRILLIANT!  Don’t believe me – check it out here. Other authors should take note – if Chris had not created the captivating cover as he did, my venture is that he would not have sold half as many copies.  As ridiculously simple as it sounds, Born to Run is so wildly successful because of its cover.

Don’t buy my reasoning?  Have a different opinion?  I would love to hear your thoughts below.