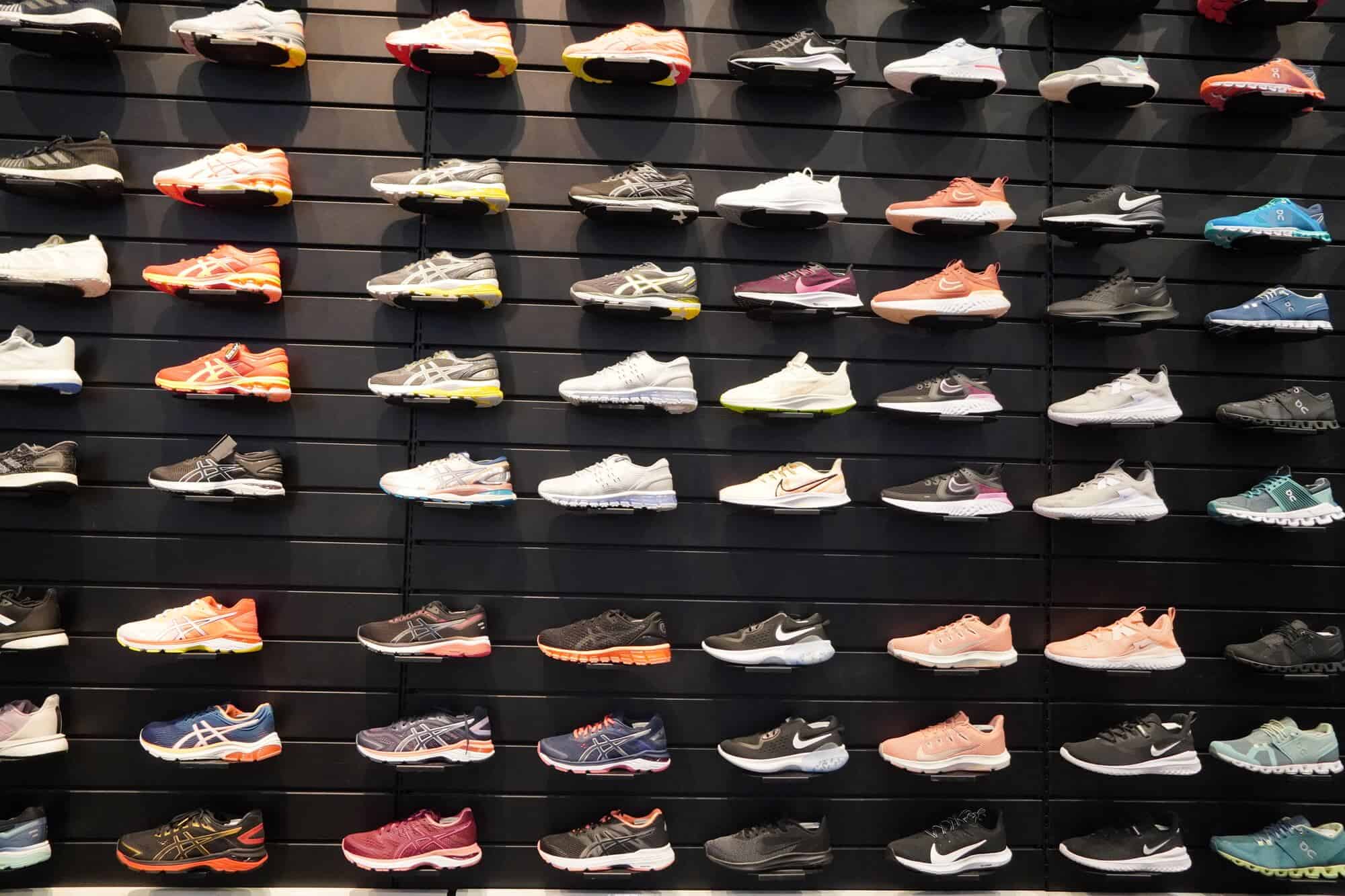 Under Armour vs Nike running shoes

Getting the right footwear can make your training significantly easier, but it’s a highly competitive market out there. Even narrowing it down by brand can be quite a challenge.

The question here is: Who would win in an “Under Armour vs Nike running shoes” comparison?

For the most part, Nike is thought of as a staple for running shoes, while UA is more of a go-to for athletic gear.

However, there’s way more information that goes into the answer, and it can get a tad bit complicated. Odds are, you’ll need to consider some factors before you decide for yourself.

In this post, we’ll analyze what each brand brings to the table. By the end, you should be able to figure out which provides the ultimate running shoe for your needs.

There are a lot of aspects to discuss, from the company’s specialty to the patent technologies. So, let’s jump right in!

Both Nike and Under Armour are reputable brands with high-quality products. Yet, each company has its own distinctive character.

Let’s see what they have in common and what sets them apart!

Under Armour’s running shoes are known for being innovative, practical, and affordable. Yet, UA’s first athletic product wasn’t a shoe at all.

The company started back in 1995 when Kevin Plank, a football team captain, sought out a way to create better t-shirts to reduce the game sweat. The prototype that got the gears going was skin-tight, lightweight, and moisture-wicking.

Soon, Under Armour went from being a basement-based company to closing its first deal with Georgia Tech’s football team.

Although the brand expanded its apparel and equipment selections, footwear came later to the product catalog. 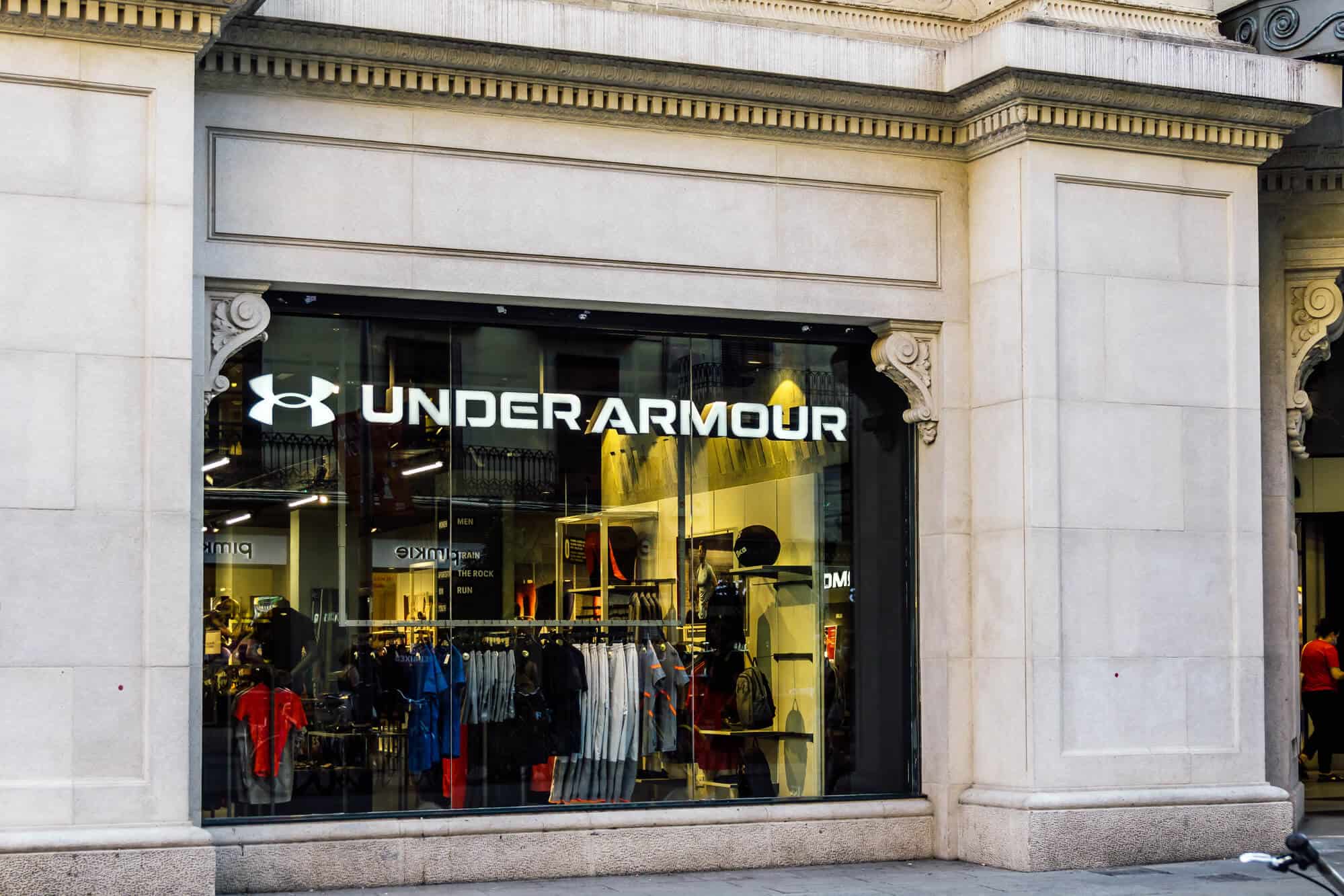 The very first running shoe from UA was the Speedform Apollo, and it catered to the avid runner.

Nike is a staple in the world of athletic footwear, and it has been around for 33 years more than Under Armour!

The very first shoes sold in Nike’s US stores were ASICS products. Of course, at the time, the Japanese ASICS was called Onitsuka.

Nike was only a retailer marketing and re-selling the imported shoes under the name Blue Ribbon Sports (BRS.)

By 1971, the founders had decided to shift into manufacturing their own sports apparel and footwear.

While it all started with quite the legal clash with Onitsuka, it’s the reason we have Nike as we know it today.

Under Armour vs Nike Running Shoes: A Head-Head Comparison

You might expect the comparison to start by picking apart the two brands in terms of quality and durability.

However, they both are quite the performers. There isn’t much difference you’d expect to see in the construction quality with either manufacturer.

Instead, other factors might sway you one way or the other. For instance, they differ in their designs, catalogs, technologies, and price tags.

Let’s take a closer look at how each of these market leaders competes in a head-to-head comparison:

When we’re talking about high-quality manufacturers like Nike and Under Armour, you need to consider the design.

The main factor that tempts people to choose one over the other is how trendy the shoe is.

Like the majority of running footwear on the market, Under Armour’s shoes are mainly mesh. However, you can find other designs in fabric, like the Charged Impulse. 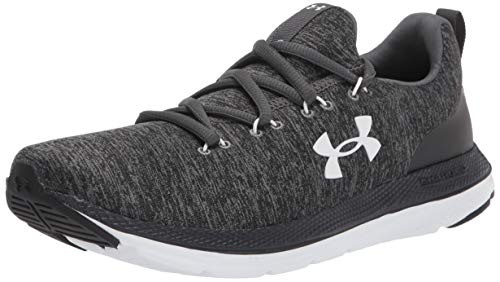 Reggie Wilson’s touch is very prominent in most of the brand’s collections, particularly the UA Embiid One line.

While it doesn’t seem trendy, there’s probably even more meaning going on behind the scenes that you didn’t know about.

In fact, the shoe’s first sketches incorporate inspiration from both Africa and the United States. It all related to Joel Embiid’s journey from Cameron to the NBA.

This should all give you insight into the designing process in Under Armour.

Yet, not all the brand’s shoes are so complex. Some of UA’s shoes have minimalistic and sleek looks with a little more obscure logos than the others.

On the other hand, Nike is bolder with the use of the Swoosh logo, but that’s not the only factor that keeps the runners hooked.

The design range you get from Nike is very versatile. It suits anywhere from teenagers to professional marathon runners.

It’s not just the designers, though. Brand exposure plays an important role in making Nike’s running shoes more trendy than the competitors.

After all, if you take a look at the biggest athlete endorsement deals, you’ll quickly realize that Nike is high on the list.

Although these deals cost an arm and a leg, they definitely make their products even more desirable.

If you’re up to it, you can try out your hands at designing your very own running shoes through the Nike By You feature. 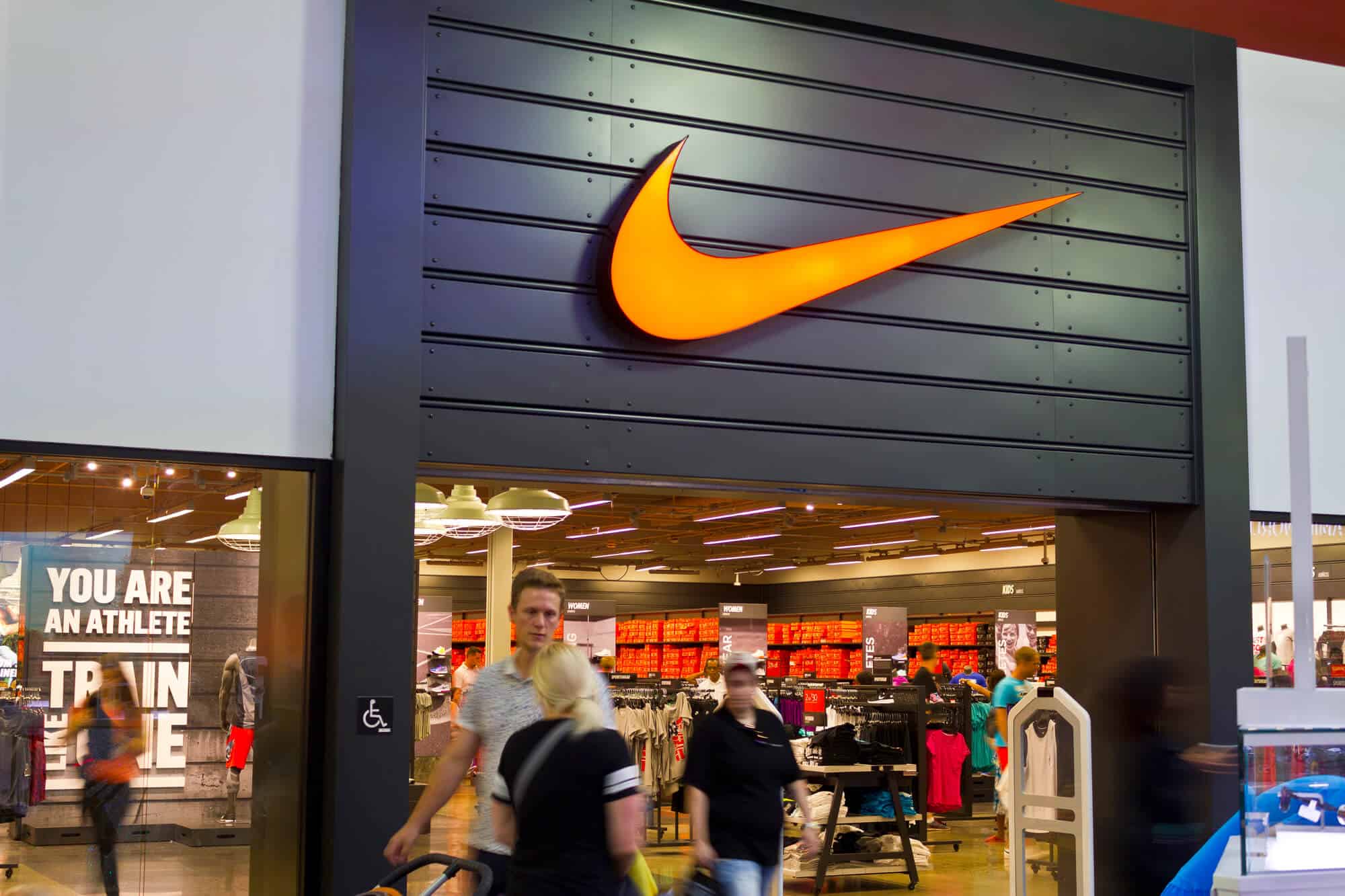 Nike takes this point home. Its designs appeal to collectors and people who care about getting the hottest footwear trends.

Sizing charts vary from one manufacturer to the other, and this can make the shift from one brand to the other a bit more challenging.

Under Armour men’s footwear chart starts at size 7, and they fit 9⅞ inches in total. The largest men’s running shoe is going to be a size 16, and it fits 13¼ inches. The largest size range for women is 12 at 11⅜ inches.

On the downside, many runners find that Under Armour’s shoes are a little on the tighter side. They still accommodate different feet widths, though.

Meanwhile, Nike’s footwear chart starts at a size of 3.5 for men to fit around 8.85 inches. So, someone who shops at the kids/teens section in Under Armour might be ready to buy from Nike’s adult collection.

Plus, it goes up to larger sizes than Under Armour. It goes to 22 for the men and 23.5 for the women. Both measure around 15.7 inches.

In terms of how the fit translates, Nike’s lasts usually run small, too. They even tend to be narrower than Under Armour’s fit.

Under Armour’s running shoes might be more suitable for people with wider feet than Nike, but both tend to be on the small side. Yet, Nike has a larger size range than UA.

The reason why sports shoes are getting more accommodating is that manufacturers are resorting to innovation.

When technologies merge with high-quality construction, the results are usually worth the effort.

What comes out is products with better cushioning, arch support, shock absorbance, ventilation, and running mechanics.

All in all, Under Armour has 793 patents worldwide. However, not all of them are strictly aimed at the company’s running shoes collection.

The majority are used in the apparel selection, from texture types to camouflage patterns. For footwear, the top technology you’ll get from Under Armour is the HOVR.

HOVR is a foam cushioning system that combines padding and bounce in one.

You can find the UA HOVR technologies in running shoes in the Sonic, Phantom, and Project Rock lines.

Keep in mind that both the Phantom and Sonic are “smart” shoes, too. They can collect data about your runs and sync them through Bluetooth. Talk about taking fitness tracking apps to the next level!

Perhaps the most common patented technology you can find in a Nike store is the celebrated Air Max.

Inside an Air Max sole unit, there’s pressurized nitrogen in a urethane bag that helps add spring to the stride and absorb impact shocks.

A little fun fact here is that the Nike Air running shoes were created by Marion Franklin Rudy, a NASA engineer. While it was initially made for ski boots, it quickly became a favorite for runners.

Yet another footwear technology that gives the company an edge with runners is the Flyknit. It keeps the shoe lightweight and breathable.

Other notable technologies used in Nike’s running shoes are the Gore-Tex, Flymesh, React, and Flywire.

Nike has way more global patents than Under Armour, but they both still have an impressive list of technologies.

Since our feet (and needs) are all different, it’s normal to wonder if you’ll be able to find something for you in any given brand.

Under Armour has five collections of running shoes to choose from. Those are the Assert, Bandit, Flow, Impulse, Phantom, Phantom 2 Intelliknit, and Vantage.

If speed comes first to you, the Flow collection might be a better fit, particularly the Flow Velocity Wind line.

In Nike’s product category, you can find options suited for thermal insulation, reflectivity, terrains, and pronation styles. You can also find easy on-and-off options that suit people with limited mobility.

If ruggedness is important to you, try out the Wildhorse and the Juniper running shoes. They’re a good fit for trail runs.

For runners with flat feet, the Zoom Structure or the React Miler lines are good options to consider.

On the other hand, someone with supination might consider the Zoom Pegasus, Zoom Vomero, or React Infinity collections. 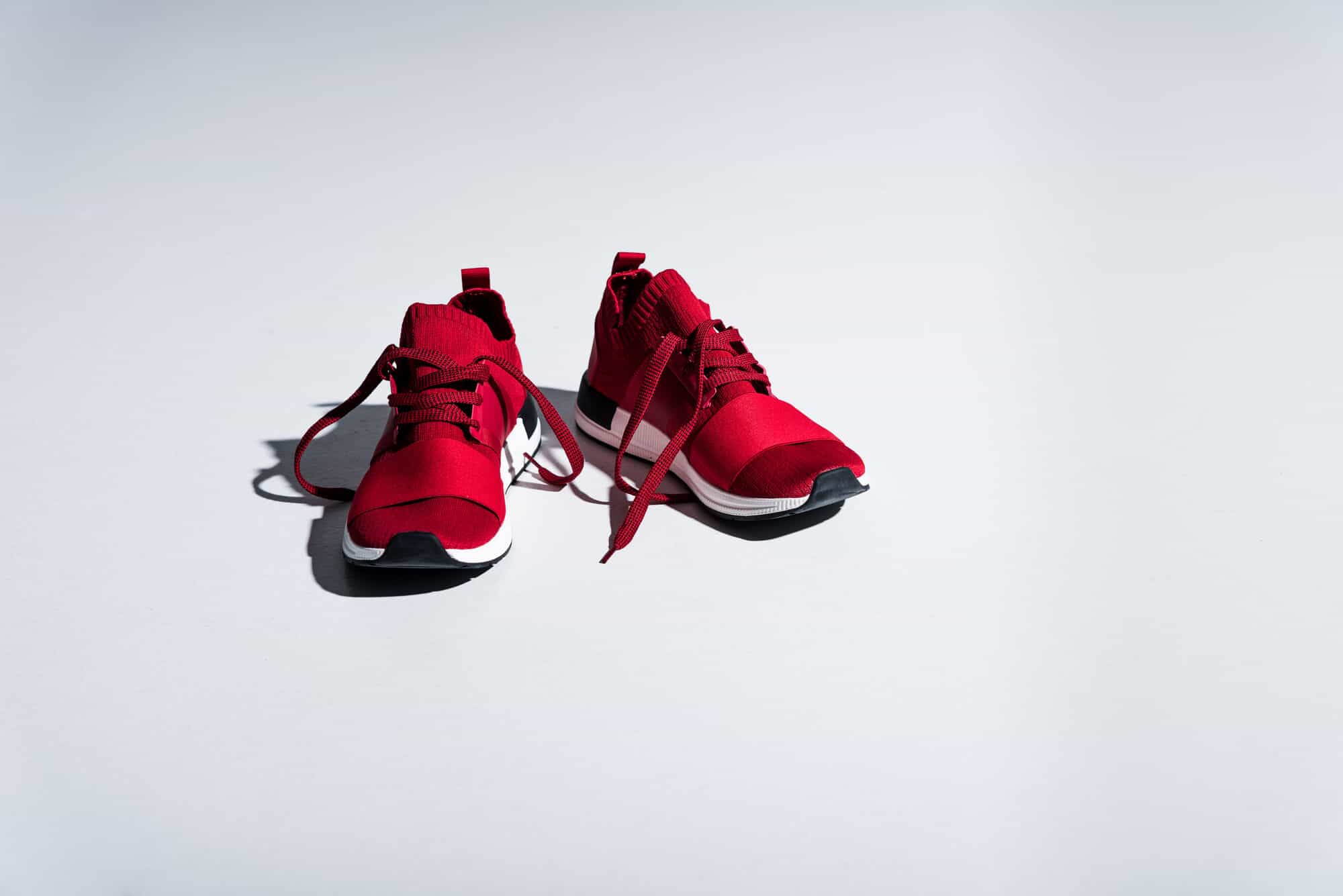 If you need a specialty running shoe, odds are you’ll find more options in Nike’s selection. However, Under Armour has some very solid options for regular everyday runs.

One final factor to keep in mind before you decide which footwear to go with is your budget. For this, you might want to consider the price-to-earnings (P/E) ratio.

Ideally, any item with a P/E ratio under 15 is considered an affordable product, but it’s all really relative in the end.

Under Armour has a notoriously low (P/E) ratio when compared to other athletic shoe brands out there.

The gist of it all is that the number on the price tag is closer to the manufacturing costs.

For an investor, this might not be very good news. For you, as a runner, this is a huge selling point.

Although there are a few budget-friendly walking Nike shoes, specialty running shoes run on the expensive side.

Nike’s price-to-earnings ratio is significantly higher than Under Armour.

However, it’s hard to say that it’s overpriced since it all depends on your point of view of the market. It doesn’t even deter many people from being loyal Nike fans.

That’s mainly because they get that extensive brand recognition and years of endorsement deals go into the price tag.

Under Armour’s running shoes offer a better bargain, and they’re a more affordable option to consider.

When it comes to buying a high-quality running shoe, you can’t go wrong with either brand. They’re both reputable names that offer practical and long-lived products.

With that said, Nike might come off as a stronger competitor in the “Under Armour vs Nike running shoes” comparison.

All in all, Nike takes the cake when we’re talking about extensive product catalogs and specialty shoes. It’s also a good fit for people looking to own the hottest trends and latest designs out there. Thanks to its brand recognition and endorsement deals.

On the other hand, Under Armour can offer you some impressive footwear technologies, like the HOVR, all while giving you a better bang for your buck. However, it’s still a more popular brand for apparel and sports equipment than for running shoes.