If you're planning to run a half marathon in Utah, don't miss out on these races which are consistently rated the best by those who have run them.

Runners World Magazine rated the Utah Valley race one of the 10 best in the country, and you'll have a hard time finding a more scenic course in all of Utah. Check out their promo video with some race highlights to see what I mean:

As they say on their website, of all the half marathons in Utah this might be the only one with zero turns. The Utah Valley race has a diverse amount of scenery along the way, including downtown Provo as well as breathtaking views of waterfalls, mountains, and other natural features along the US 189 highway.

"I loved everything about this race. Utah Valley is my new favorite race. I signed up for this race after a very disappointing race at Ogden in May of 2015 and it wasn't just the weather. The Utah Valley had friendly volunteers and the atmosphere was awesome."​ - Tiffany - RaceEntry.com

"I've run the Utah Valley Half Marathon every year since it was added in 2010. I've run 25 half marathons, and this is the one race each year that I won't miss. It's a beautiful race. It's fast. It's extremely well organized."​ - Bruce - Facebook Review

There's nothing quite like running among the tulips! Hopefully they can give you some flower power on this half marathon, which starts and ends in Electric Park and extends through Ashton Gardens, home to 250,000 tulips as part of the annual flower festival.

The course is beautiful but challenging, and don't expect a PR. It runs through the gardens and includes more than 5 miles of paths through the Thanksgiving Point Championship Golf Course. There are rolling hills which are both steep and plentiful, and the course twists and turns. Also be ready to run on everything from asphalt to gravel to cobblestones.

"First, the race organizers were more than helpful with registration and packet pickup. Second, volunteers were not only abundant, but friendly, knowledgeable and very helpful. Third, everything from the races to the awards ceremony was on time and efficient. Fourth, there were plenty of activities available for spectators as they waited for their loved ones still on the run."​ - Kimberly, Deseretnews.com

"Thanksgiving Point’s Tulip Festival Half Marathon has a perfect route if you get easily bored during your runs. It was so beautiful and changed so much over the 13 mile course. The communication from the race directors was fantastic. The course support was fantastic."​ - Goodruns.blogspot.com

The Dino Half Marathon - Vernal​

This is a small marathon through stunning Dry Fork Canyon, and it's a ton of fun. One of its unique features is the Sprintasaurus Competition where, for a half mile stretch, runners can sprint as fast as they can and the fastest person (determined with chip scanners) wins a prize.

The course is fast, easy and well-marked, so plan on finishing with a new PR. Expect a good amount of downhill as well as some rolling hills.

"This is one of the prettiest runs I have ever done. I have done it 4 years in a row and I plan to do it again." - Steve, Dinohalf.com​

"You know those races that you love beyond what words can describe?!? That would be the Dino Half Marathon. It was so beautiful and the course was perfect." - Stephanie, Runlilmamarun.blogspot.com​

This half marathon has a stunning backdrop, the V-shaped canyon, and runners will be distracted by the beauty of sites along the way, including Big Cottonwood Creek and the Historic Old Mill. The real party starts at the finish line though, with fun for the whole family.

The course is primarily downhill, so this is an ideal race "for the rookie half marathoner and a great way for the experienced runner to achieve a new PR", according to the official site. The beginning elevation is at 7,700 feet and ending elevation is at 4,700 feet. There are a handful of flat spots, and some grades up to 7 1/2%. 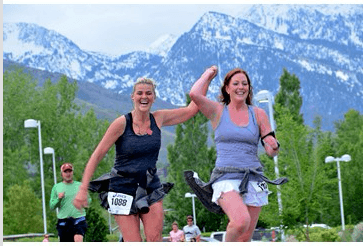 "Beautiful day! Beautiful weather! Beautiful course! Other than the super early morning hours, this was a perfect race!" - Susette, Susettefisher.blogspot.com​

"This is one of the most beautiful races I have done. I love Big Cottonwood Canyon and it provided a fantastic backdrop all the way down. It is definitely an all down hill course with 3000ft drop from the start to finish. This made for an awesome PR. I beat my best time!" - Understandingbits.blogspot.com​

Thelma and Louise Half Marathon​ - Moab

This may be a new event, but the inaugural edition in 2015 was a huge success, so you can bet it's here to stay. Participants in this fun ladies-only race are encouraged to come dressed as either Thelma or Louise, the race medal is a belt buckle and, as an added bonus, the water stop at mile 1.5 is a "Brad Pitt" stop. This means that it's manned by men all dressed in jeans, a white t-shirt and a cowboy hat, like Pitt in the movie.

As the official website says, "There are sure to be fast times as this course is FLAT, FLAT, FLAT!" This out-and-back marathon extends beside the Colorado River on Highway 279. It starts and ends at the Gold Bar Campground.

"This was the first race that I ran with other people and let's just say it's going to be hard to run a race any other way. Running with friends makes the time just fly by. There were a few times I had to remind myself that I wasn't just out on a long run with a bunch of other people. For me I really enjoyed the relaxed atmosphere. It was my slowest half, but the one I had the most fun at!" - Ann, Enevoldson.blogspot.com

"This marathon is a girls’ weekend for the badass. When you combine camping, racing, and the love of a movie that’s all about girl power, you have a recipe for a pretty epic time. You run through a gorgeous canyon following the Colorado River. The course itself was absolutely gorgeous. Out and backs can sometimes be a little mundane, but the view along the Thelma and Louise course changed with just about every step. The post-race party is the only place to get beer in Utah before 9 am." - Brooke, Wreckingroutine.com ​

This half marathon "takes you through Utah's spectacular Bryce Canyon National Park, a geologic wonder that lures visitors from around the world with its incredible red rock formations, stunning views of amphitheater-like canyons like Inspiration Point, and wide-open skies", according to halfmarathons.net. It's also worth noting, though, that the race starts at an elevation of 7,652 feet, so runners who aren't used to the high altitude should consider this before signing up.

This is a relatively fast point-to-point course. It is flat and mostly downhill, although the second mile is gradual uphill and there is a slight incline at mile 12. The total elevation loss is 1,800 feet.

"If you ever get the opportunity to run a race in or near a National Park, I think you have to take it. It's certainly a nice change of pace to get out and run between huge red rock formations as opposed to the ever-present city sidewalk running. The course was also well organized. A recommended half marathon." - Doug, Yelp Review​

Spectacular views await in Parowan. This event, one of the state's most beautiful, kicks off at the Yankee Meadows Reservoir, in Dixie National Forest, home to spruce, juniper and maple trees, not to mention stunning rock formations, like Vermillion Castle, and ends downtown.

This is a gradual, long downhill run with a total elevation drop of around 2,300 feet, and it's an excellent high altitude event to prepare runners participating in full marathons in the coming months.

"If you ever get the chance, sign up for this race. It’s so pretty and SO inexpensive. And the small town vibe is great, you get the sense that people in the community take pride in the event and they pull together to make it happen. It’s great when the organizer is at the start line and tells everyone just to throw their jackets, bags or whatever into her van and she’ll have it for you at the finish!" - Jill, Jillwillrun.com

"Very scenic and fun. Well organized and the chocolate milk at the end was phenomenal." - Brian, Raceentry.com Review

As with many Utah half marathons, this one takes in a place of notable beauty, culture and history. From the spectacular red rocks and the real dinosaur footprints along the race route to Buckhorn Panel, one of the world's biggest Native American pictograph panels in the state, this stunning run is one-of-a-kind.

The course is flat and downhill, with a few gentle rolling hills. It begins at 5,656 feet above sea level and ends at 5,100 feet, according to the official site.

"I can't get over what great organization this race had considering it was basically out in the middle of nowhere. There were plenty of water stations almost every mile. The post race relief station was 30 miles from the closest town and yet it was well staffed and had a great spread of sandwiches, fruit, drinks, desserts and snowcones. The second half of the course was really spectacular running through the canyon area and past the ancient Native American wall paintings. If you're into smaller races away from the crowds and like the open enviroment of a rural run, this is a must do race." - Michael, Marathonguide.com Review

"Flawless organization, beautiful and varying scenery, and great support make this one of my favorite marathons. Enthusiastic volunteers delivered fluids, foods, GUs, and port-o-potties every two miles as promised, making it completely unnecessary to carry supplies. As others have mentioned, the beautiful finishing location, shade, and food was wonderful." - R.P., Marathonguide.com Review

If you're looking for something different, then you don't want to miss The Haunted Half. Join thousands of other runners, dressed up in costume, for this event in Salt Lake City. It's fun for the whole family, with picture booths, bounce houses and face painting. It begins in Emigration Canyon, extends towards Sugar House Park and continues along Haunted Lane until the end.

This race has a downhill and flat course. It's fast and fun, and the perfect run for achieving a PR.

Image Source: The Haunted Half​

"Another of those great canyon runs that we all like. Makes for PRs. Great finish. A couple of hills to make it tough. Great food and a cool park to finish at." -Robert, Raceentry.com Review

"The shirts were amazing, the party stations were fun, and the volunteers rocked. It was a beautiful morning for a run, so thanks for the great weather too! I had a great time and would love to make this a yearly tradition." - Nena, Thehauntedhalf.com​