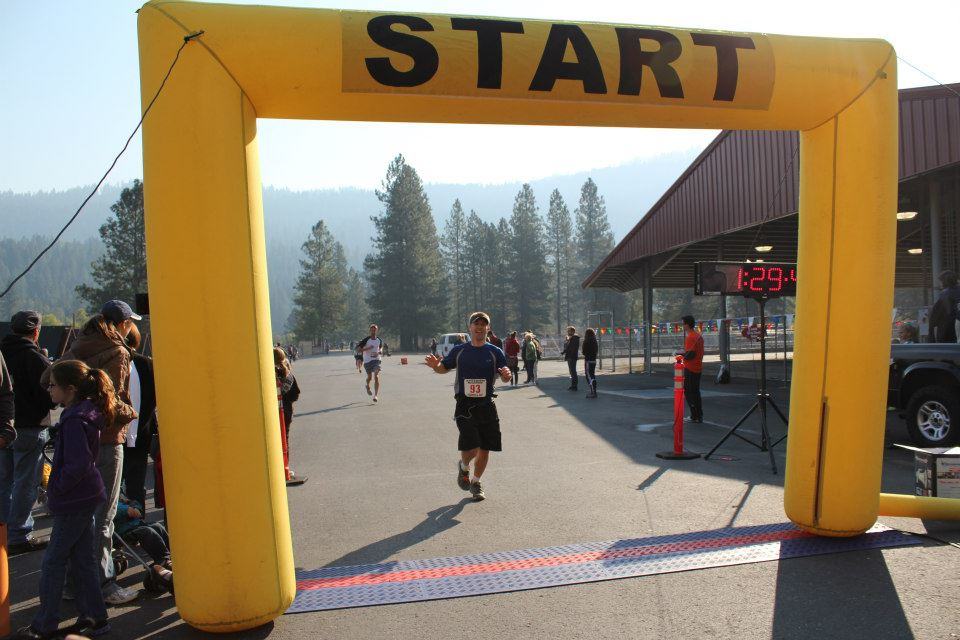 Each year I sit down and try to write out what my goals will be for running.  As you can see, its now May, and I’m barely getting these goals posted.

Today, I’d like to cover some of these reasons (good or bad) why it has taken me so long.  And then of course, I’ll dive into the goals!

I’ve been running for several years now, and last year was perhaps my most prolific in terms of miles run, races competed, and personal goals set.  I set personal records in the following distances during 2013:

Seeing these results from my training was rewarding!  But it was also incredibly draining.  Leading up to my marathon, I was regularly running 50 to 60+ mile weeks.  When I finished my marathon in October of last year (see my Leavenworth Marathon report here), I was ready to take a break from running.

And I think taking breaks is important…we’ve all heard the value of rest.  Unfortunately, I allowed my “break” to turn into a stop from running.

I was feeling a bit burned out, and went from running 60 miles a week to running 5 or less miles each week.  I also rediscovered my love of donuts and brownies…okay that never went away!

After the marathon in October, I’ve run 2 races…one was the Turkey Trot on Thanksgiving day; the other was the 15k Badger Mountain Challenge in March.  So, I was able to stay in good enough shape to finish those races, but I’m many miles away from being in peak condition.

So, that’s where I’m at; trained the hardest I ever have in my life last year, needed a break and feeling burned out, now 6 months later, I’m finally considering getting more serious about running again.

With that background, lets jump into my goals for 2014.

What I’ve come to realize is that if I’m not running, I am not doing anything else to stay in shape.  I’ve had a chance to play some racquetball and basketball; and even sought out a local ultimate frisbee group.  I would LOVE to be involved in all of these on a regular basis; however, I’m finding that its not feasible.

The schedule for all of these sports is very fixed and if you can’t make the time, you don’t play.  I’m finding that the flexibility of running is perhaps the best way for me to get regular exercise in.  I can go in the morning, afternoon, evening…or anytime that I have the chance.

I’m not required to go at a specific time, and I’m finding that’s what is keeping me from doing other sports on a regular basis.

Over the past few years I’ve been setting weight goals; however, a better metric for me to track is percent body fat.  I have somewhat muscular build so my BMI (Body Mass Index) always tells me I’m overweight (even when I was in the best shape of my life)…its a poor metric to look at.  And just looking at weight doesn’t tell the whole story either, since muscle weighs more than fat.

Last year I took at % body fat measurement a few weeks after my marathon.  At that time, I was just over 10% body fat.  I now sit at about 16%; and was up near 18% just a few weeks ago.  Clearly the lack of running and excessive milk and brownie consumption is taking its toll!

So, I’d like to reverse the trend and get back down to under 12% by the end of the year.  (FYI, I’m using the Fitbit Aria Wi-fi Scale to measure my body fat percentage.  Its nice to use because it automatically logs your weight and body fat percentage history and sends the data via Wi-fi to your online profile that you can view at anytime).

If I worked extremely hard, I’m sure I could get down to the 10% body fat mark; but I don’t want to burn myself out again, so I’m trying to set a goal that I’ll be happy with, but is not overly ambitious.  Ideally this will be something I can sustain for the long term.

But don’t fear, I’ll continue to track my weight as well…and I’m sure I’ll have more fun weight AND fat charts that you can enjoy down the road.

Goal 2 – Set a PR in the Half Marathon

This is a pretty ambitious goal considering that its nearly June, and I haven’t really been training much.  However, I think a period of 6 months is certainly enough time to get back into shape and make this happen.

You will also notice that I’m not trying to set a PR in a full marathon.  This again goes back to me trying to find a balance between training hard enough, but also not burning myself out.  I want to get in shape, but I also don’t want to train so hard that I stop enjoying the sport.

So, a full marathon this year I think would just be overwhelming for me.  But a half-marathon is a great distance to train for that doesn’t require as many miles.

Goal 3 – Be Consistent and Have Fun

I want to enjoy running as much as I enjoy the many benefits of running.  I love being in shape and extending my life; but when I train too hard like last year…I hang up the shoes for a while, become inconsistent, and lose everything I had worked for.

So, I want to enjoy running, the events, and overall try to have more fun with the sport.  I don’t have a specific action for how to accomplish this goal necessarily.  But here’s some ideas:

And finally, I know I need to be more consistent in my running…especially near the end of each year.  I usually get plenty of running in during the summer and fall months, but when winter hits; I seem to call it quits each year.

Because of that, I’m setting a secondary goal here to be more consistent.  That goal is to run at least 80 miles each month during November, December, and January.  If I can keep a base of at least 20 miles a week during these months each year, I really do think I’ll be much better off because of it.

So, that’s my 3 goals for 2014!  Even though it took me a little longer than usual to get these goals set, I’m glad it’s done as it will give me something to shoot for now.

I’ll be sharing my thoughts and progress throughout the year, so I hope you’ll stick around.  If you have any comments, questions, or anything else you would like to share; please do so in the comments section below.