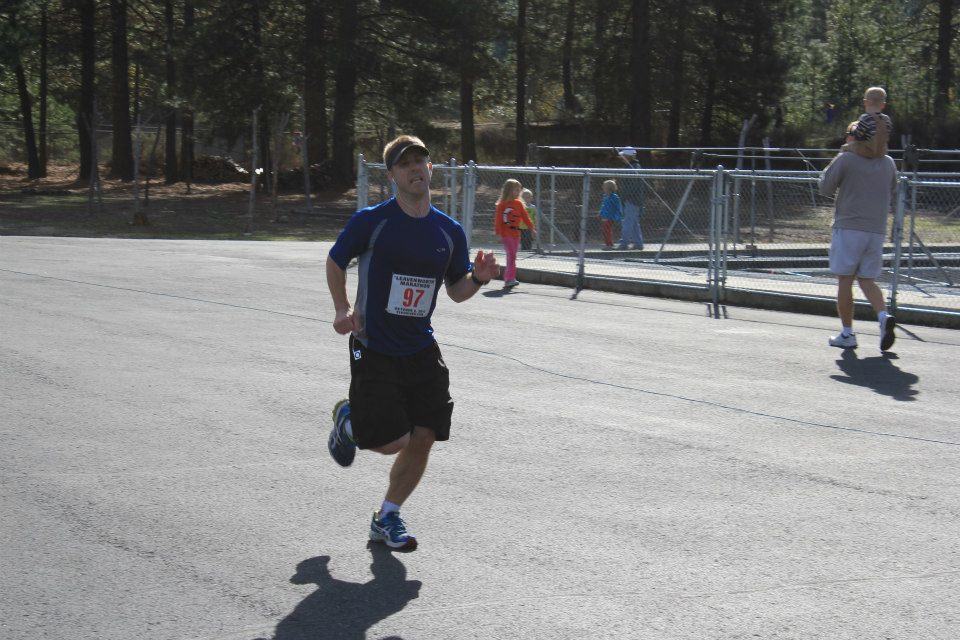 After months of training and just about as long strategizing and calculating potential results, I completed the Leavenworth, WA Octoberfest Marathon on October 5th, 2013.

The completion of ANY race brings with it excitement, feelings of accomplishment (or failure), and the inevitable thoughts of what’s next!  However, this is especially true when you complete a marathon.

I can honestly say that this is the hardest I’ve ever trained for any race, and I’m happy to say that my race results show that.  But if you know me, I also seem to find things that I’m not happy about with my result (this was on full-display with my mental breakdown in Boise this year).

So, lets dive into that a bit later in this post…okay? After all, if I play the “what if” game, I know others runners do too, so lets just talk about it.

I’ve talked about my training leading up to this marathon a bit, but wanted to mention what I’ve been doing just a bit more.

Last year I essentially ran my own customized plan based on a few others.  However, this year I bought the book, Advanced Marathoning by Pete Pfitzinger and Scott Douglas and followed one of their plans.

Specifically, I followed the 55 mile to 70 mile per week plan.  Believe it or not, this is one of the lower mileage plans that they recommend for advanced marathoners…the keyword being “advanced”.

This page here shows the mileage for the 18 week training plan that I did. However, there is MUCH more information about how to run these miles (tempo, long run, speed, etc.) in the book.

So, in a nutshell, I ran Monday through Saturday, with Sunday being my only rest day each week.  Each workout is run at a different speed, but most of the miles are slow; very few miles were run at marathon pace or faster.  Most of my miles were run at nearly a minute slower than marathon pace; particularly the mid-week medium long runs and the long runs on Saturdays.

However, there were a decent amount of Tempo and speed work throughout the plan.  However, I did much less interval/speed work during this training program as compared to what I did last year.

The tempo runs and long runs are clearly the 2 most important runs of the week, and this plan prepared me very well for the marathon.

So, after training for over 4 months for the Leavenworth Marathon, what happened?  Well, I went into the race with a solid goal of sub-3:30.  Last year I ran the same course in a time of 3:37:13, and based on my previous half marathon I knew my goal was within reach.

Well, I’m happy to say that I finished the marathon in a time of 3:32:29!  A new marathon PR is nothing to complain about…but of course, I missed my goal, so I’m not 100% satisfied.

However, just to give you an idea of how far I’ve come (and to remind my stubborn self) running the marathon distance, here is a list of my 4 full-marathon times:

First, so you can see what the race profile looks like, here is the elevation map from my GPS watch (Garmin 305 by the way):

As you can see, the first 10 to 11 miles are a nice downhill grade and then fairly flat the rest of the way.  But the question is, how fast should you run the first part of the race?  I’m not sure I have a good answer for that, but I decided to take it a bit faster than my marathon pace.  The idea was to run at what felt like an 8 min/mile pace, but because going downhill is easier, would actually be going a bit faster.

I had every intention of running these miles somewhere between a 7:50 to 8:00 mile pace.  However, I was shocked when I saw that I had run the first mile in 7:34!  I knew it would be hard to control the adrenaline, but that was just way to fast.

However, I had trouble getting into a rhythm for the next few miles with my pace.  I bounced down to 7:43 on mile 3, and then was at a 8:28 for mile 5!  I’m not sure why I went so slow that mile, I guess I was just trying to prevent myself from going so fast.

Anyway, by mile 7 I finally got into a rhythm and was finally sticking in the 7:52 to 8:00 range for the next several miles.

Here’s a photo me running during those first 10 miles:

Now at the bottom of the mountain, you start to see a bit more civilization.  This part of the course takes you up near the fish hatchery, around a dirt road, and then onto some horse trails.  I actually enjoy this part of the course, as it continues to be scenic and the trails are a nice change of surface from the asphalt.

In addition, during this part of the course you do a bit of a there and back and have a chance to see lots of runners that are a few minutes behind you come down off the mountain.  I saw 4 different friends that were running the marathon, and even got to slap high five with one friend as we passed each other.  Pretty cool!

I said hello to one guy (my mistake), and I think he took a liking to me.  He chatted at me for the next few miles.  I have to admit though that after the first few minutes I was ready to end the chat and get back focused to running.

Sorry chatty runner guy, but I turned up my iPod and sped up a bit to leave you.  I’m more than happy to talk to you now that the race is over.

I kept my pace right where it should have been for miles 10, 11, and 12.  Mile 13 was a bit slower because I think I got distracted by chatty runner dude.

Overall, I finished the first half of the marathon in a time of 1:43:40.  Again, right about where I wanted to be…just a little ahead of my goal pace.

However, I should also point out that I had started to notice that my watch hit 13.1 miles quite a ways ahead of where the course marker said the half way was.  I was already over .15 miles difference between my watch and the course markers.

During this stretch of the course, I continued to feel good.  I was loving the cool temperatures that Leavenworth has, and stuck right on pace for these miles, except for one.

I also ditched my knit cap and gloves that I had bought at the dollar store at around mile 19 or 20.

I was really happy with my race through 21 miles, but I was finally getting tired.  However, I still felt like I had enough in the tank to stay very close to my pace.  I knew it was going to be a tough test to bring it home, but I was optimistic.

My overall pace through 21 miles according to my watch was an average of 7:56 minutes per mile.  So, my watch said I was 84 seconds faster than my goal.

However, I knew this wasn’t correct because my watch continued to be now almost .20 miles ahead of the mile markers.  I couldn’t quite do the math in my head, but I figured I was still just slightly faster than my goal pace.

This part of the course is not fun.  The course is on asphalt near the edge of town without anything exciting to look at.  In addition, you have 2 there and back diversions onto side streets.

And the “back” part of these sidestreets are slightly uphill (not much, but at miles 22+ it feels like a lot).

I was fatigued and didn’t like the ever so slight uphills that I felt.  My pace started to slip a bit during these miles:

After mile 24, I still felt like I was close.  My watch was giving me false hope though and perhaps I wasn’t thinking clearly.  Through mile 24, my watch said my overall average mile pace was 7:58.5.

Miles 24 to the end, take you back near the fish hatchery and onto the horse trails that were run during the first half of the marathon.

Running through soft horse trails isn’t quite as fun at the end of the marathon as it was half way through.  I was huffing and puffing pretty hard at this point, and was probably scaring bystanders with my awkward breathing/groans that I made with nearly every step.

Here’s a photo of somewhere around mile 24 or so

My legs were feeling heavier, but I was determined to finish the best I could.  However, somewhere during mile 24 or 25, I finally figured out the math that I wasn’t going to hit my goal.

Even though my watch said I was slightly under pace, I knew it wasn’t going to happen as I passed the mile markers on the course.  I ran mile 25 at a pace of 8:18.

During mile 26, I was still trying to calculate how far off from my goal I was; looked like a couple of minutes to me.  So, I knew I wasn’t going to hit my goal, and I let my pace slip just a bit more…but trust me, I was pushing about as hard as I could!

When my watch hit mile 26.2, I looked down and saw that my time was 3:30:15!  I was so darn close according to my watch, but again…the watch isn’t official; its the course!

So, I actually had about another quarter mile to go.

I was very happy with setting a PR and the fact that my training clearly paid off – as I felt much better at the end of this marathon compared with the last one.

However, I obviously didn’t hit my goal, and that always leaves just a little to be desired.  But I’m very satisfied with the great time and personal record!

Here’s my mile pace breakdown from the marathon:

With the completion of any race, comes the thoughts of “Now What?”  And to be honest, at this point, I still haven’t made up my mind.

Going into the race, I had put in more training miles than I ever had, with several weeks running in the mid-60 mile range.  For me, that is a lot of miles! (I know some of you super humans do much more than 65 miles a week).  My body and mind was pretty wore out by all the training, so I was telling myself that I could finally relax after the race was over!

However, the thoughts of, “What could I have done better?” or “If I trained differently, how much faster could I get?” and of course the question of, “What is my body really capable of doing?” always come to mind.

So, will I run another marathon to see if I can break the 3:30 mark?  I really don’t know at this point…I’m not sure I want think about it!

Will I run more shorter races in the coming months? Most likely.

But for now, I’m giving myself a physical and mental break from all of the tough training I’ve put in over the past several months.  I’m going to just enjoy my most recent marathon accomplishment of setting a great personal record, and then slowly let my body tell me when its time to start running again.

Now that’s its been about a week since I crossed the finish line, going out for a nice slow jog doesn’t sound so bad…