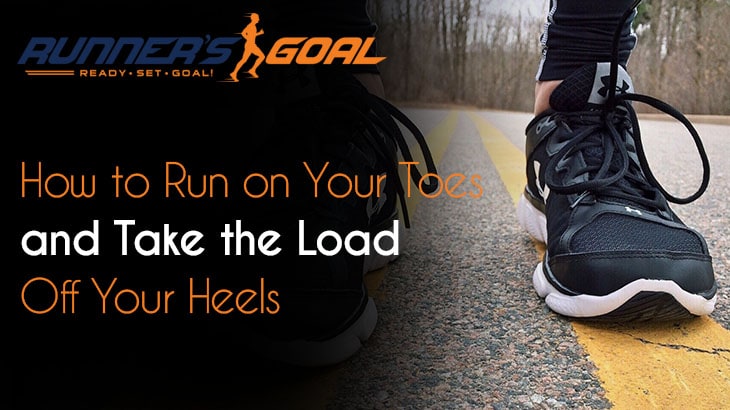 You tend to be a heel runner and you’re paying for it. You’ve been struggling with plantar fasciitis for months. It’s time for you to learn how to run on your toes.

You’re hoping that running on your toes will take some of the load off your heels and you’ll be able to put more mileage in. But you’re not sure how to run on your toes.

Follow these tips to help out your heels out by landing on your toes instead.

What You Can Do

Tip 1: Put Forth Some Effort

For many runners, running with a heel strike comes naturally. So it isn’t going to be easy to change without some work on your part.

If you don’t understand what a heel strike looks like, consult some videos or have a friend film some running footage of you when you’re out for a jog. That will give you some idea of how much heel striking you’re doing.

Realize that changing your heel strike habit won’t be easy, but it is doable.

Tip 2: Do Some Sprints

Toe running is also called forefoot striking. To understand what toe running is, incorporate some sprint work into your routine.

Sprinters often run with a forefoot strike to help propel themselves forward as rapidly as they can. When you sprint, you naturally tend to land on the front of your foot as opposed to the heel.

Don’t do sprint work more than once a week, especially if you aren’t used to doing it. Adding in too much speed work can increase your risk of injuries.

Shoes can change the way our foot strikes while we’re running — some are heavily padded in the middle while others are flatter. That difference in shoe construction can contribute to how we strike when we land.

And since each foot will strike the ground up to 100 times while running just for one single minute, changing your foot strike can matter dramatically when it comes to staying injury-free.

Because there are big differences between thick, padded running shoes and minimalist shoes, you may need a transitional shoe to ease the way to minimalist shoes. That may help you avoid injuries that you may encounter while you’re making the switch.

While you’re working on changing your running form, make sure you include cross training. It won’t directly impact whether you’re able to make the transition from heel striking to toe running, but it will help you avoid injuries while you tinker with your form.

Like everything else in life, balance is important. Working your muscles is no exception.

If you rely on running as your only form of exercise, your body can develop imbalances in muscle and muscle groups. Cross training is the best way to fight back against those imbalances.

By having all your muscle groups toned and fit, you can create the symmetry that proper running should have. When there’s symmetry, there’s less chance that you’ll injure yourself.

Make sure you’re cross training enough by adding exercises like light weight lifting, bicycling, and swimming into your weekly workouts.

If you’re trying to switch from heel striking to toe running, one thing that might be holding you back is overstriding.

When runners tend to overstride, the heel usually strikes first, and even worse, the knee is often overextended as well by the time the heel strikes. Overstriding can cause a number of injuries in a runner.

Instead of overstriding while you run, focus more on how many steps you take during a full minute of running. Runners who overstride tend to take far fewer steps than runners who don’t.

Try to increase how many steps you take every minute. By taking quicker steps, you won’t have as much opportunity to overstride.

You’ll protect yourself from injury, and it will be easier to make the transition to toe running since your form will be better.

Tip 6: Do It Gradually

Just as you wouldn’t go from running more than 3 miles at a stretch to suddenly attempting an 8-mile run, you shouldn’t start running on your toes with every step you take. The key is to work it in gradually, mixing in toe running with your normal heel runs.

If you start running exclusively on your toes when you’ve always been a heel runner, you run the risk of injuring yourself. Although it might seem like a small transition, it will feel quite different to your joints and muscles, so go slowly to avoid creating problems.

When you’re attempting to change how you land on your foot when you’re running, you need to remember that stretching after a run remains just as important as ever. In fact, it might even be more important because of the new stride you’re teaching your body.

Not only will stretching feel good on your tight and sore muscles and tendons, it also might help ward off new injuries. A few minutes of basic exercises can mean the difference between a successful transition to toe running or developing an injury that sidelines your running progress for a few weeks.

So take the time to do some basic stretches and foam rolling exercises.

Don’t Forget to Give It Time

Runners can be an impatient group. We often tell our running buddies to stick with something for a while before giving up on it, but we have a hard time practicing what we preach.

We like to see results quickly, even though we know when it comes to running, slow and steady often is where the improvement comes from.

So while you work on how to run on your toes, make sure to cut yourself some slack and keep your expectations realistic. You’ll get there if you take small, bite-sized steps.