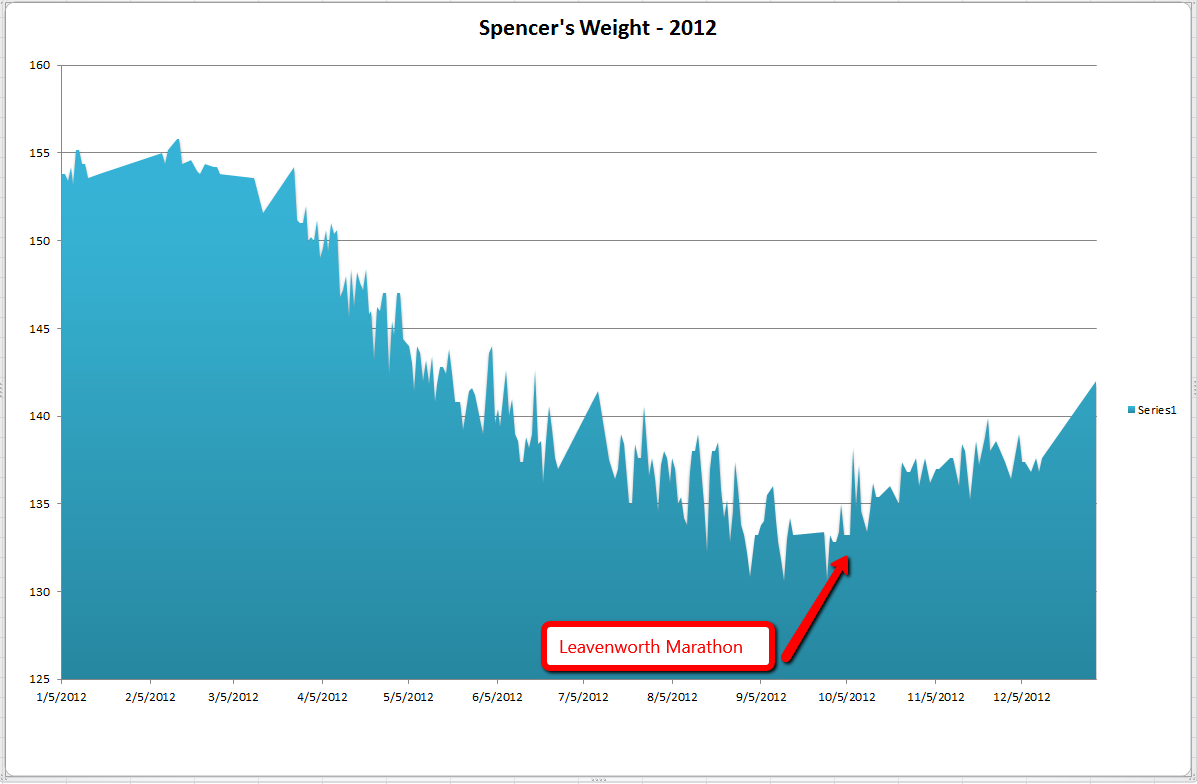 Near the beginning of 2012, I set 3 goals that I wanted to accomplish during the year.  You can read my original post with those 2012 running goals here.

I’m writing this post in March, so its well past due!  However, I wanted to share some of my running accomplishments from 2012 because as I look back, they actually are fairly remarkable (at least to me).

Overall, I didn’t set any land speed records, but the purpose of this post is to keep myself accountable as I try to achieve specific goals through running. So, lets take a look at the goals I set about a year ago and how I did.

I actually got down to 131lbs. on September 28th, which is 24 lbs lighter than where I started.  That was just a week before my full-marathon that I ran in Leavenworth, so I was in peak condition.  However, I gained back some weight in November and December after the marathon was over and the Holiday goodies kicked in.

So, I didn’t reach my goal, but I actually got very close.  And despite putting a few pounds back on, I’m happy to say that I didn’t completely stop running during the winter months, and so should have a much easier time training and staying trim during 2013.

Here is a graph that shows my weight from 2012.

But wait, there’s more!  I know you are dying to see what my weight has been over the past few years, so take a look at this!  (Includes my weight up until March 2013).

Not only did I want to lose weight, but I wanted to push myself a little harder and start setting some personal records!  Well, I’m happy to report that I set records in 4 out of the 6 distances I am keeping records for!  In fact, I think I would have set personal records in the mile and 10k distance at well, but I didn’t run any races at that distance this year.

I set PRs in these distances with these times:

So, I did not accomplish this goal either because I wanted to set PRs in ALL distances; however, I did pretty well.  In fact, I dropped about 21 minutes off my marathon time, and about 9 minutes off my half-marathon time.  The best part is that I think with more consistent training throughout 2013, I can do even better.

Also, here is a chart of all my PRs.  Its a dynamic chart, so if I set new PRs, this chart will be updated…so all my 2012 times may be gone by the time you read this!

Goal 3: Place in my age group in any distance 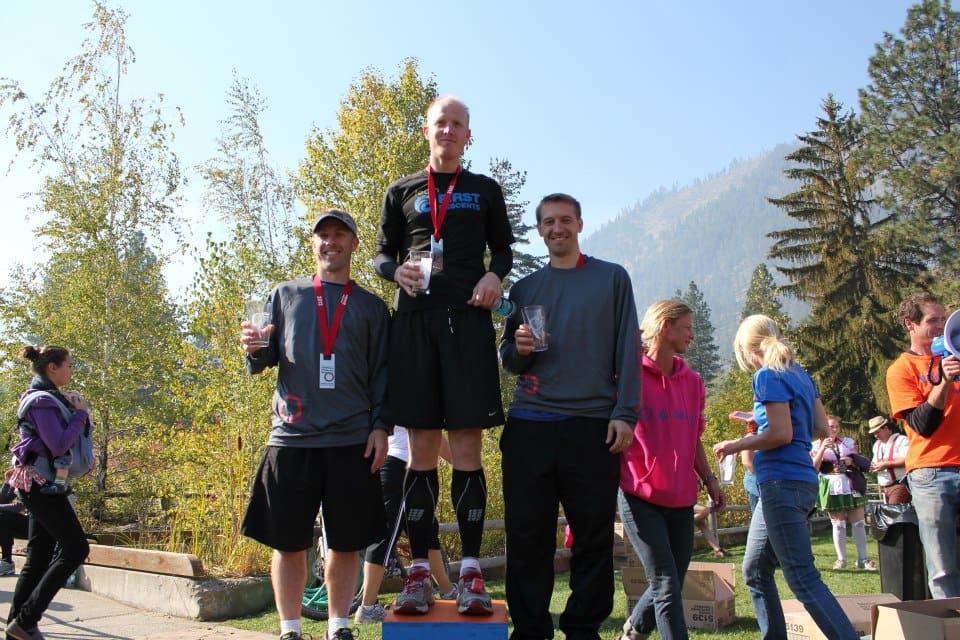 As you can see from the picture above, I placed 3rd at the Leavenworth Marathon for the 30 to 35 year olds with my time of 3:37:13.  I finished just a few minutes behind my brother Ben who got 2nd place (also in the photo).

I placed 3rd in the Lake Chelan Half Marathon as well, with my time of 1:40:50.  I blame my friends for not letting me get first on this one.  Stephen got 1st place and another friend of mine Aaron got 2nd place…in my age group!  I guess I need to run with slower friends…

So, I accomplished just 1 of the 3 goals that I set at the beginning of the year.  However, I’m quite happy overall with the weight lost, the PRs set, and the races finished.

Two months have already flown by in 2013, but I can honestly say that I’m in much better shape at this time of year than I have ever been.  I kept up running throughout the winter pretty well, and I already completed my first half marathon race just a week ago (read my Tricities Half Marathon Review here).