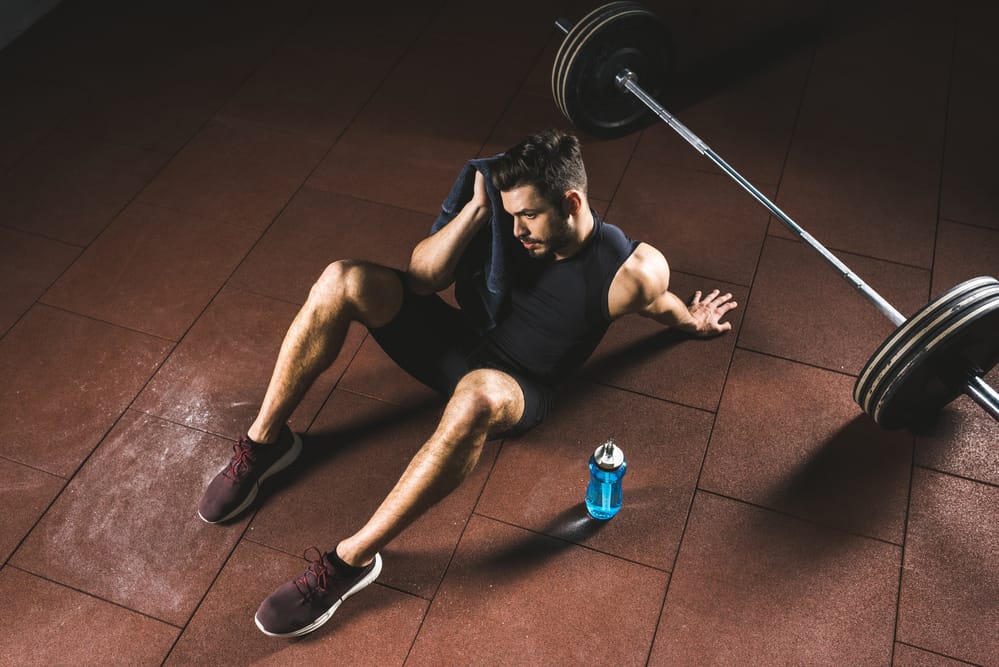 Why Does My Chest Hurt When I Run?

You’re on one of your morning runs, feeling the wind on your face and the hard concrete beneath your feet. But then, you suddenly feel a twinge in your chest.

You ignore it and push on, thinking nothing of it. But it gradually gets worse, and now you’re thinking, “Why does my chest hurt when I run?” followed by, “Wait, am I having a heart attack?!”

Surprisingly, chest pain is more common in active people than in non-active people. Luckily, it isn’t always a sign of a heart attack or any problems related to the heart. Sometimes, it’s brought on by overtraining and respiratory issues, such as adult-onset asthma or pneumonia.

Why does my chest hurt when i run? Here are some of the most common reasons:

Running is a high-intensity sport. It’s mentally and physically taxing—especially when you’re a beginner and don’t have a trainer to guide you.

The problem with running is that it can easily (and sometimes unintentionally) push your body beyond its limit.

In theory, this is a good thing. It’s almost as if you’re getting rid of your self-imposed boundaries and breaking through to greater achievement.

In practice, pushing yourself beyond what you’re physically capable of is extremely dangerous. This is why PTs and professionals introduced the 10% rule—to encourage people to pace themselves.

If you’ve not had much experience with running and your chest suddenly starts hurting, it’s possible that you’re running at a rate your body isn’t accustomed to.

It could mean you’re pushing yourself too hard, too fast, and too early.

You’ve likely hit your limit, and now your body is rebelling against you. Your seizing chest is telling you that it’s time to stop or to slow down at the very least.

Heavy respiration and chest pain are two of the biggest warning signs of overtraining. Other symptoms include:

Chest cramps work just like leg cramps—and yes, they’re just as painful as they sound (and sometimes even more so).

Chest cramps occur when the intercostal muscles (the muscles surrounding your rib cage) contract involuntarily. The pain is sharp and highly localized, meaning you can pinpoint the exact place where the cramp is occurring.

Like leg cramps, chest cramps worsen with movement. They last anywhere between a few seconds to 10 minutes.

One of the biggest culprits of chest cramps is dehydration. To compensate for the lack of fluid, the heart pumps faster and works harder, leading to palpitations and chest pain.

It could also be caused by electrolyte depletion or imbalance, which is often associated with cardiovascular emergencies.

Alternate between regular water and electrolyte-rich drinks, such as coconut water, watermelon water, and sports drinks. 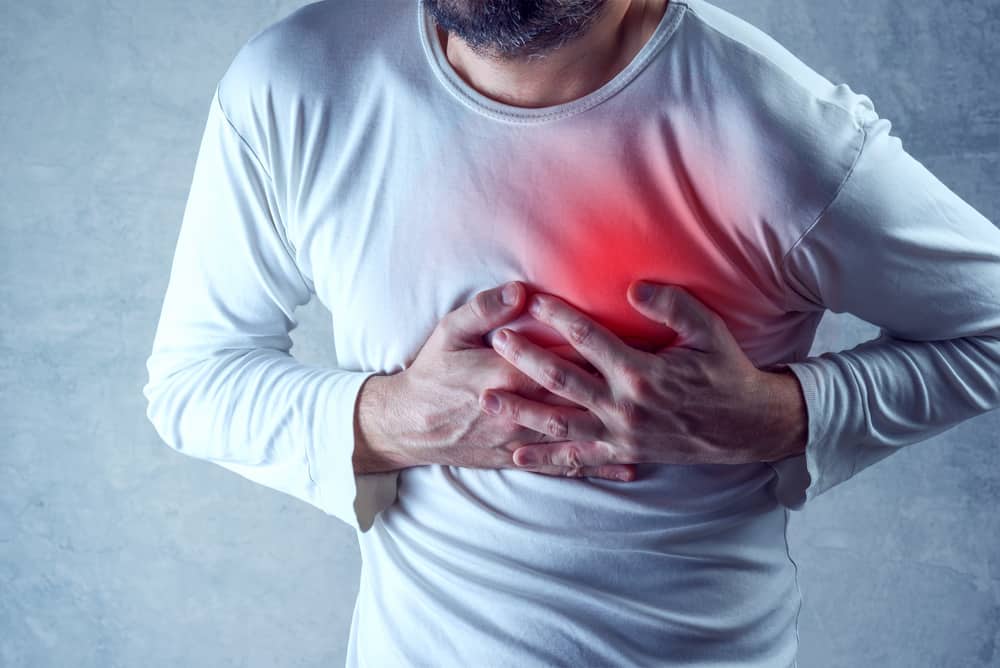 As the name implies, heartburn is associated with burning pain in your chest area, usually behind the breastbone. It occurs when stomach acid goes back up the esophagus tube, which is responsible for moving food from your mouth to your stomach.

Heartburn is triggered by foods that are high in fat or acidic, such as citrus fruits, tomatoes, cheese, chocolate, and the like. Spicy foods also contribute to heartburn, as well as tobacco in cigarettes and some blood pressure medications.

Running puts a ton of pressure on your digestive system. When this occurs, the esophageal sphincter forces itself to relax to counteract the increased tension. This then causes food or stomach acid to “burp” back up from your stomach into your esophagus.

To prevent the sensation of heartburn on your runs, don’t go running after a heavy meal. Wait at least two to three hours for the food to settle.

If you can’t afford to wait that long, forgo the heavy meal and opt for something light and soothing before a workout, such as a yogurt, banana, or a small bowl of whole-grain cereal.

Other pre-run snacks include:

Experiencing sudden cardiac arrest during a run isn’t common, but certainly not unheard of.

According to a study published by Sports Health, about 1 per 200,000 participants experience heart attacks in half marathons and marathons. It’s often deadly, too; killing around 70% of said participants.

A heart attack, also known as myocardial infarction, occurs when one or multiple coronary arteries become blocked with a buildup of cholesterol, fat, and other substances (like a blood clot from a ruptured plaque).

The blockage causes an interruption of blood flow and oxygen, which causes the heart muscles to stop functioning.

When one experiences a heart attack, he may feel pain in the jaw, chest, back, and other parts of the upper body. The pain is sometimes intermittent or continuous, lasting longer than a few minutes.

Apart from the tell-tale pressure or tightness in the chest, here are other common symptoms of a heart attack:

Although heart attacks can happen to anyone of any age, it’s more common among people over 40 years old.

Sex and genetics also increase the chance of heart attacks; statistically, men have a much higher risk of heart attacks than women, as well as people with a family history of heart disease.

If your chest pain eases up when you rest and starts up again when your run, you might be experiencing angina pectoris.

Similar to heart attacks, angina is caused by reduced blood flow to the heart muscles. It’s not as life-threatening as a heart attack, but it’s a big warning sign that you could be at risk for a heart attack and stroke in the future.

Angina is often described as pressure, tightness, heaviness, or pain in the chest. Those who have experienced angina also say it feels like a vise squeezing their chest, or a heavy weight sitting atop their chest.

The trademark signs of angina during exercise are chest pain, shortness of breath, and radiating pain to the jaw, left arm, or back. If these symptoms don’t resolve quickly with rest, or if there are residual symptoms, medical attention is crucial. 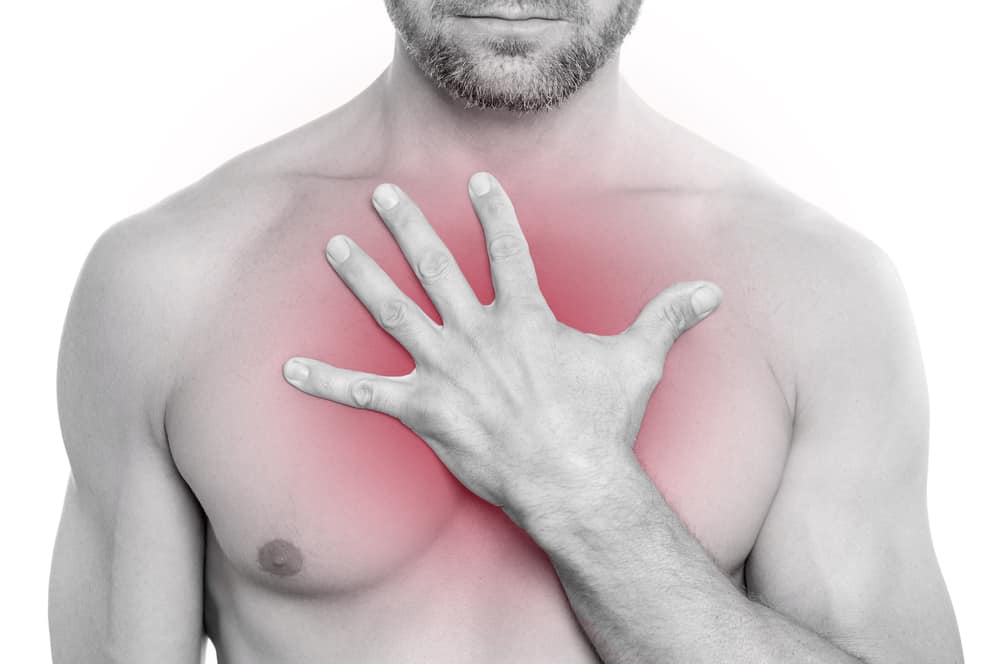 Chest pain is often a symptom of exercise-induced bronchospasm (EIB).

It occurs when the lung’s airways narrow in the midst of exercise, thus making it hard to breathe.

Individuals with EIB find it increasingly difficult to exercise more than 25 to 30 minutes at a time.

90% of the time, EIB happens with people with asthma. But the condition can occur in people without asthma, too. It’s especially common among high-level athletes that regularly push themselves to the maximum.

Thankfully, people with EIB can continue to exercise and remain active as long as they take preventive measures and proactively treat the symptoms with asthma medications.

Apart from chest pain, here are signs of EIB:

EIB isn’t immediately life-threatening, but it can result in serious breathing difficulties and lower quality of life when treatment is ignored.

Chest pain is common among those with underlying respiratory issues, such as:

The above conditions are often mistaken by EIB, because most share similar symptoms.

They’re much more serious and life-threatening than EIB, though, so it’s always a good idea to visit a pulmonologist for adequate testing. There, the doctor can determine the root cause of your chest pain and recommend proper treatment.

If you’re an athlete that regularly trains or competes outside, exposure to the elements can increase the risk of lung infections like pneumonia and pleurisy. Lung inflammation feels like sudden sharp pain when you take a deep breath.

People with asthma are familiar with the sharp, stabbing pain in the chest during an attack. But those who have yet to be diagnosed may not recognize it as such.

Adult-onset asthma might be the reason why you’re experiencing chest pain whenever you go running.

Asthma is a chronic disease that mainly affects the lungs. When triggered, the lung’s airways become narrow and inflamed, making it difficult to move air in and out of the lungs.

Tell-tale signs of of adult-onset asthma include the following:

Adult-onset asthma is often mistaken for allergies or a result of prolonged non-activity.

But with adult-onset asthma, the affected person’s breathing becomes more labored than usual when exposed to an allergen or when they exercise. The asthmatic may also experience distressing breathing for longer periods.

In severe cases, those affected almost always require the assistance of medication to relieve their breathing.

The most common congenital heart disease include the following:

About one in four babies with CHD have critical CHD, often requiring surgery and/or long-term care. In rare cases, CHD may go undetected into adulthood, affecting your runs and exercises.

If you experience shortness of breath, heart palpitations, chest pain, and bloating or fluid in the lower legs that don’t go away with elevation after your runs, seek medical attention immediately. This might be a sign of undiagnosed CHD.

As mentioned previously, running is a high-intensity sport. Without proper precautions, it can result in exercise-related trauma, inflammation, and injury, all of which can cause chest pain.

One of the most common exercise-related inflammation that causes chest pain is costochondritis, an inflammation of the cartilage that connects your sternum (breastbone) to your ribs. It’s caused by any activity that places stress on your chest area, such as sprinting and strenuous exercise with repetitive movement.

Another exercise-related trauma is Tietze Syndrome, which is characterized by chest pain and swelling of the rib cartilage. Like costochondritis, it’s often triggered by strenuous exercise.

Final Thoughts On Why Does My Chest Hurt When I Run

Why Does My Chest Hurt When I Run: There are innumerable reasons. It might be due to overtraining, chest cramps, or exercise-related trauma. It might also be something more serious, like angina, a heart attack, or exercise-induced bronchospasm.

Regardless of the reason, you should always get yourself checked if you feel pain in your chest after your runs. This is especially true if it’s becoming a constant trend.

Chest pain is a symptom of a bigger issue, and thus should never be ignored.