I want to share my personal experience and findings as it relates to tasting metal or blood when you do an intense training session like running, Cross Fit, etc. – just note that I’m not a doctor – so I don’t pretend to offer medical advice, just my experience as a runner and some of the best resources for this condition online.

Now that I’ve made my disclaimer, yesterday I had a nice run with a couple of friends of mine.  Actually, calling it a nice run is somewhat misleading since the run was both completely horrible and awesome at the same time.  I guess that averages out to nice right.

My friends and I went out and ran the Badger Mountain trails in Richland, WA starting from Trailhead Park up to the top then down the Skyline Trail to the parking lot off of N. Dallas Road before turning around and doing it in reverse.

The Badger Mountain trails are not extremely steep but if you are not used to running hills they can certainly put you in a position to overexert yourself.

Yesterday when we ran Badger I think it had been like 6 months since that last time I purposefully ran hills of any kind.  I probably should have spent more time on Badger this year than I have and perhaps the Boston Marathon’s Newton hills might not have kicked my butt as bad as they did.

Anyway, one of the guys I ran with obviously had done more hill training and took off like a rabbit up the side of the mountain headed to the top.  I tucked in behind but I tell you what, it was a rough 1.75 miles to the top.  There was some major league sucking wind going on from my end.

When we all three made it to the top I swear my heart was going to burst out of my chest and flop around on the ground before expiring.  The interesting thing was it totally tasted like I had been sucking on the bumper of a Buick or something because I had a bad taste in my mouth – best described as the taste of metal –  as I stood in the breeze catching my breath.

Have you ever had that experience before where you have a metallic taste in your mouth after a strenuous run?

I know I have at times in the past when I was not in good of shape and tried to do too much.  I was curious what that was all about so I decided to do a little research yesterday.

I did a little research and you know what it is?  It is actually a mild form of heart failure.

That sounds super scary but it is actually not that uncommon and is really just a sign that you are exerting yourself beyond what you heart was able to keep up with.

How Your Heart Works

So how does the human heart work anyway?  We all know that the human heat is nothing more than a pump to keep the blood circulating through the body to keep us going.  It is actually pretty interesting how it works. 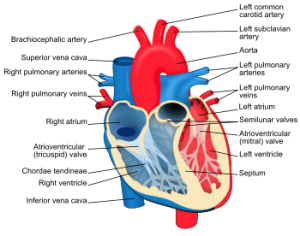 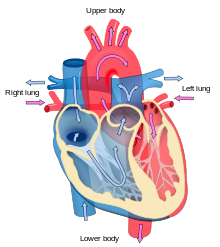 Blood flows through the heart in one direction, from the atria to the ventricles, and out of the great arteries, or the aorta for example.  Blood is prevented from flowing backwards by the tricuspid, bicuspid, aortic, and pulmonary valves.

The heart acts as a double pump.  The function of the right side of the heart is to collect de-oxygenated blood, in the right atrium, from the body (via superior and inferior vena cavae) and pump it, via the right ventricle, into the lungs (pulmonary circulation) so that carbon dioxide can be dropped off and oxygen picked up (gas exchange).  This happens through the process of diffusion.

Typically when you are resting or exercising you are at an equilibrium in that your heart is normally pumping out exactly as  much as it is pumping in.

This system usually runs very smoothly, resulting in the proper flow of blood.  Nonetheless, if one element of the pump is not performing at full capacity, fluid can accumulate in unwanted places.  If your left ventricle is not able to pump blood out of the heart to the body at the rate the right ventricle pumps it into the lungs, fluid accumulation in the lungs can result.

This is sometimes referred to as a pulmonary edema.

Why Do I Taste Metal?

Our red blood cells contain hemoglobin, a highly efficient molecule whose purpose is to collect and transport oxygen.  Hemoglobin is carried around in groups connected by a central iron ion (Fe).

When you are overexerting yourself, fluid can accumulate in the lungs where some of the excess red blood cells can accumulate in and be transported to the mouth via phlegm (nasty I know…).  Our tongues carry receptors that respond to iron (Fe) by sending a signal to our brains that we sense as a “metallic taste.”  Whether you taste blood or “metal” it is basically the same mechanism at play.

How Can I Prevent Tasting Blood?

Even though it’s not necessarily a painful experience, having a blood or metal taste in your mouth is certainly gross and a little concerning.

So how can you guard against this happening next time you work out?

According to Nordic researchers one way is to simply get your body in better shape. As mentioned from my anecdotal experiences, when you’re not in top shape – this is more likely to occur. As you get into better shape, your blood vessels are better equipped to handle the pressure and you’re less likely to taste blood.

Whether or not you decide to keep running at that moment and press through the weird taste, that’s up to you. There’s nothing definitive that suggests it’s dangerous to continue – but more than likely it’s in your best interest to take a break and let your body recoup a bit.

Even though getting in better shape may help, it’s not 100% guaranteed to stop you from experiencing this phenomena. Even elite athletes can get the taste of blood or metal in their throat – so just because you experience it, doesn’t mean you’re necessarily not a fit person.

How Serious Is This Problem?

In short, you have a metallic taste in your mouth during strenuous exercise because your heart is unable to keep up with the physical demands you are placing on it.  Is this a sign of really bad things?  Not necessarily.  Particularly is there are no other symptoms of concern.

Our bodies are capable of dealing with this mild form of cardiac underperformance.  You will typically experience relief from the symptoms when you stop exercising and resting for a bit.  By resting a bit you are decreasing the demand on the system and the left ventricle is able to catch up to the demands of the right ventricle.  The fluid is thereby cleared out and red blood cells are no longer accumulating in the lungs.

According to the experts, actual heart failure produces additional symptoms including shortness of breath.  This is accounted for by an even more extreme accumulation of fluid in the lungs than is expected during strenuous exercise.  One could also expect persistent coughing or wheezing, buildup of excess fluids in body tissues (i.e., swelling of feet, ankles, legs, etc.), fatigue, nausea, confusion, impaired thinking and increased heart rate.

If you do not have these sort of symptoms, you probably just over did it a bit on your run so the next time you try to chase someone up the side of a mountain, well just let them go…

Obviously I’m not a doctor, so if your symptoms persist or worsen, you might be wise to go see a medical professional.

36 thoughts on “Why do I have a Metallic Taste in my Mouth during Strenuous Exercise?”