You’ve finished your run; you crossed that finish line that’s been haunting your dreams for a long time. It feels rewarding, doesn’t it?

But the minute you stop running, you break into a violent coughing fit that doesn’t seem to go away. It’s not a one-time thing either because it happened the last two times you finished a run.

You start asking yourself, why do I cough after I run?

There are multiple reasons; here’s everything you need to know about the matter.

Why Do I Cough After I Run?

Coughing after running or doing any cardio exercise is a common condition, but the cause differs from one runner to another. S

ome runners cough after running because of a seasonal allergy, and others do it because of exercise-induced bronchoconstriction. Here are all the possible causes.

Exercise-induced bronchoconstriction is a common condition among runners, especially athletes who frequently sprint or do high-frequency running exercises.

The condition causes coughing during and after running. The way it works, it causes your airways to constrict for a short time as a result of physical activity.

With the high heart rate and the constricted airways, you won’t be able to get enough air in your lungs, which causes a fit of coughing.

The coughing doesn’t persist for long; it only remains for a few minutes. It’s been described as similar to asthma attacks, although it only gets triggered by exercise rather than pollen, smoke, and similar items.

EIB is more common among asthma patients. It’s estimated that 90% of asthma people get EIB, but not vice versa. You can have EIB without having asthma, which is the case with many runners.

If you’re recovering from a cold, your cough may be because of a postnasal drip.

That happens when your glands produce too much mucus, so some of it ends up trickling into the back of your throat. It causes a tickly feeling at the back of your sinuses and a persisting cough.

If you run outdoors, the cough may get worse because your throat will be irritated. It may also get an excess drip, which causes even more cough.

It’s better to wait until the cold symptoms completely disappear before going for a run outdoors. It may be better to stay on the treadmill until then. 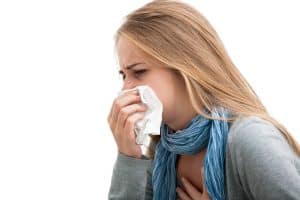 If you don’t get coughs after running except in springtime, it’s probably because of a seasonal allergy.

Many people develop seasonal allergies in the spring because the pollen count increases more than the rest of the year.

At this time of the year, people with asthma suffer from breathing problems, and the same goes for people with seasonal allergies.

You may notice that you’re wheezing after running or sneezing out of nowhere. In that case, you may want to consult a doctor for medication.

Although vocal cord dysfunction isn’t a common condition among runners, it may be the reason for your cough if there isn’t any other possible cause.

If you suffer the condition, you’ll have breathing issues even when you’re resting.

What Are the Symptoms of EIB?

The main symptom of EIB is coughing—lots of it. You may also notice shortness of breath and some wheezing.

Some people report feeling a tightness in their chests, and some people find it so difficult to breathe or get air into their lungs.

On top of all that, you may feel some abdominal discomfort as a result of the violent cough.

Or, if you’re sprinting or doing high-frequency training, you’ll notice that your endurance isn’t as good as it was. You’ll want to rest soon after you start exercising, and your lungs will feel tight while pushing yourself to work out harder.

Most of the time, EIB attacks are minor and don’t need medical interference. However, if you leave the problem untreated and keep running and pushing yourself over the edge, you may encounter a violent coughing fit.

How to Know if EIB Is the Reason for Your Cough

You won’t be able to know for sure if EIB is the reason for your cough. The only way to find out is to consult a doctor and carry out a proper process for the diagnosis.

You’ll likely go through lung function tests both when you’re running and at rest. If the tests show a function decline after running or doing any form of exercise, it may be a sure sign of EIB.

The doctor will also evaluate the symptoms and see whether the coughing is accompanied by wheezing. You’ll also probably be asked about your family’s history of asthma or whether you’re an asthma patient yourself.

That’ll probably save the doctor a lot of the guesswork.

In the end, your coughing may be a result of environmental factors without anything serious or a medical condition.

How to Prevent Coughing After Running

Just because you start coughing after running doesn’t mean you should stop running altogether. There’s a solution to everything, and with some minor lifestyle changes, you can run comfortably and prevent the coughing fit that attacks afterward.

Of course, that’s after you consult a doctor and make sure the cough isn’t because of an underlying condition.

If the cough persists when you run outdoors, you may want to run indoors for a while. Running on the treadmill may help get you in shape before running outdoors.

If the air is dry, the weather is cold, or the pollen count is high, your cough will get triggered. In this case, stay inside until the weather improves.

Spring is known to be the worst season for runners because the air will be full of pollens. So, it may be wise to run indoors during the spring. 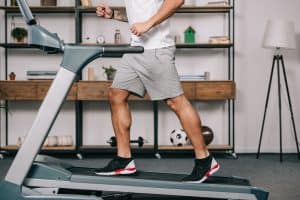 If all the other solutions aren’t working for you, the best approach is to visit a doctor and get a prescription. If you have asthma, this is a crucial step if you want to keep practicing your favorite sport.

It’s also essential if you suffer EIB because you may encounter some side effects if you leave it untreated and keep running.

Most EIB cases can be treated by simply using an inhaler. It eases the cough and opens up the airways, so you can use it before running to have a peaceful session. Of course, you’ll need to consult a doctor first.

It’s also worth noting that an inhaler will only fix the problem temporarily. It’ll open the airways for a short time, and the cough may start up again—particularly if you’re running in the cold weather or breathing in pollens.

If you’re looking for a long-term solution, you may want to discuss it with your doctor.

Cover Your Face While Running

If you get a cough because your nose and mouth are constantly hit with dry air, you can always cover your face while running. You can use a loose scarf, and make sure it’s not affecting your breathing pattern.

It’s also worth noting that you shouldn’t keep doing this for long. It’s only good as a temporary solution until you can get a treadmill or until the cough stops.

If the cough is refusing to stop, you can skip your daily run as a last resort. It’s not always the best choice, especially when you have a race or a marathon coming up, but it’ll give your lungs some rest before you start coughing again.

You can at least skip your run until you can visit a doctor or find a solution to your problem.

Does Exercise-Induced Coughing Start Once You Run?

If you have EIB, does the coughing start the moment you start running?

More often than not, EIB-induced coughing starts a good while after you start running. It may happen 15 minutes after the start of your session, and you may not cough until after you finish running.

You may get the same cough when swimming or doing any cardio exercise. It usually happens when you manage to get your heart rate up, which doesn’t happen in slow strength training, for example.

How to Identify the Reason for Your Coughing

To identify the reason for your coughing, you need to study different kinds of coughs and know which one you have. Here are the two main types.

Dry coughing is the type that happens when there’s no dripping, mucus, or phlegm in the back of your throat.

You won’t feel the moisture in your throat while you’re coughing, and you’ll feel it coming out of your chest rather than your sinuses.

In this case, the dry cough is either because of EIB or a seasonal allergy. It may also be because anything is irritating your airways, such as pollens or dust particles.

When your cough produces mucus or phlegm and feels wet overall, that means that it’s productive. In this case, it’s likely a result of an infection, a common cold, or the flu.

It’s not recommended to run while you have a productive cough because you’ll irritate your throat further.

The best thing to do is to rest and wait until the cough goes away before attempting to run.

Final Thoughts On Why Do I Cough After I Run

So, why do I cough after I run?

It’s likely a result of exercise-induced bronchoconstriction. At least, that’s the most common reason.

Other causes include seasonal allergies, postnasal drip, or running in dry air. In all cases, identifying the cause is up to the doctor, so you can get appropriate treatment.