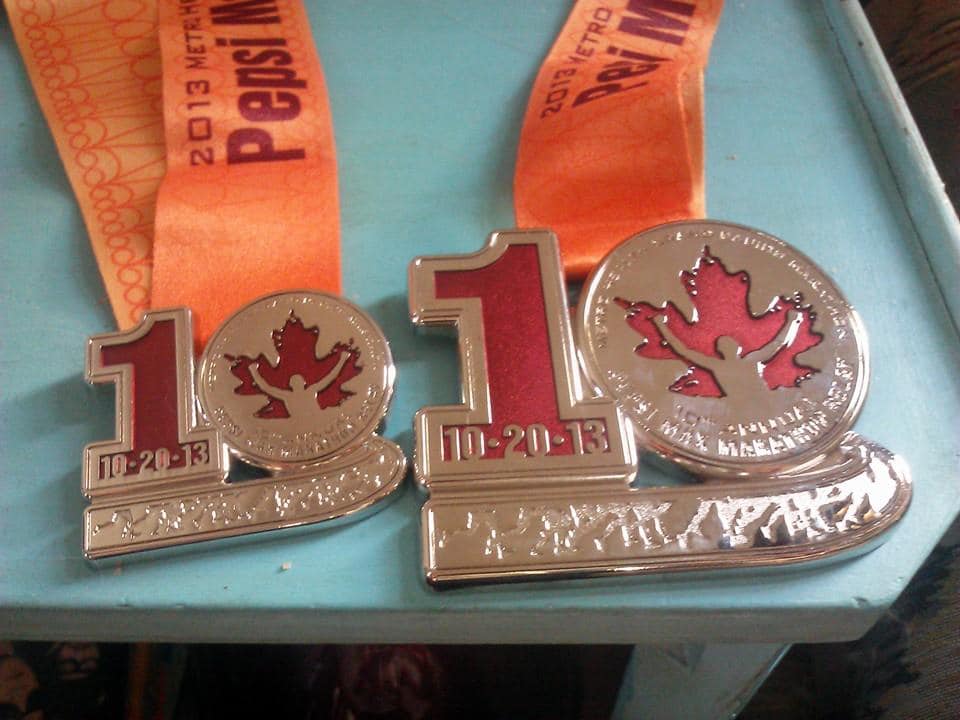 Most runner’s will admit that they have a shallow love of medals. Even if it’s a finisher’s medal that you got for simply making it—somehow—to the finish line, that little bit of bling is something to relish. Medals represent our hard work, dedication, time spent training, and our achievement.

I never thought I’d win a medal for placing in a race because I’m just not fast. As far as women 25–30 go, I’d have to be in a race with fewer than five of us in order to place in the top five. Or at least, that’s what I thought until I joined a relay team!

Fresh off of marathon training, I had plans to run a relay with my runner friends. I had never run a relay before, but knowing that I was still in marathon shape, I figured a short leg of the marathon would be a fun and easy way to reconnect with some of my running friends, get a little exercise, and experience something new.

It would be nice to feel the positive atmosphere and the energy of a run, but still be able to cheer on other runners like a spectator. Plus, it was inexpensive, I still got a medal, snacks, and beer at the end! The craziest thing, and something we never thought would happen, was that we came in third place for women’s teams! And it’s a pretty big race!

We were so excited and proud of each other. Though I usually am a pretty casual (that’s code for slow) runner, I hauled. It was a clear PR for me.

With all of that in mind, I want to encourage readers to participate in a relay race. There are a lot of reasons to do a relay, and even if you wing it, chances are you’re going to have fun with your team. To have a memorable and successful race, here are some tips for doing your first relay!

Join or build a good team. If you want to place with your relay team, you might be looking for different people than if you just want to have a good time. Make sure that everyone is on the same page, and that you pick reliable people to join with you. It would be terrible to get close to race day and find out that someone bailed on the team.

Have a back-up. Things do happen, and if someone really does need to bow out for whatever reason, it would be nice to have a second string person, just in case. At least this would prevent you from having to give up on the race, or asking someone to do multiple legs if they’re not comfortable doing that.

Make sure you have a leader. For our relay team, we had one point person who was making sure we all had the details, we all paid her for our share, and she set up the carpool. We all talked and gave input on things, but having one person to ultimately assign legs and confirm our plans was nice and clear.

Get ready for race day. Even if you are plenty in shape for a few miles, make sure you’re ready for it. Run at race pace a couple times in the weeks leading up to the race, and then taper like you would for a longer distance. You’ll be glad that you know you’re ready, and happy to have fresh legs for the relay.

Train for your leg. I was lucky to get the first leg of the race. This meant that I could run just like I would for any training day, which is early in the morning. If I had been picked for something like the last leg, it would have been harder for my body to be into it because I never go for a run at 11am. This is also why it’s a good idea to have this set ahead of time, so you have a couple weeks to practice for your time slot.

Run like crazy. This might be easy for people who do 5ks and more frequent 3-5 mile runs at race pace, but when I did my first relay, I was in the habit of much slower, longer runs. On the day of the relay, I decided that I was just plain going to run like crazy. I did not pace myself. I did not hold back for the last mile. I ran my fastest, passing people who were trying to find a reasonable pace for a long run. It was weird to pass people, but it worked! I was close to an 8 minute pace, and that’s incredibly fast for me. Even when I thought I was tired and should slow down, I kept at it. I definitely suggest this strategy!

Enjoy the time not running. Of course the run itself is fun, but especially if you’re doing a relay with several other people, you’re going to have down time. When you’re not running, take that opportunity to be a good spectator. You know what it’s like to have peppy crowd support. And if you’re slow like me, you never get to see the fast people go by. Watch the others start, or grab a snack and a drink and watch others finish.

Be proud of your team. Unlike a solo race where you may not want to boast about how you did, doing a relay means you get to brag about your team! Tell everyone how great they did, celebrate, and thank your pals for going the distance.

I am still in shock from our win. In my shadow box of medals, it’s the only medal that I’ve won for placing. I am still so proud of our team! Being in a relay inspired me to go for shorter races, but to cut loose with the quickness that I didn’t know I had. I hope other people decide to try a relay because it is a complete running experience unlike any other.

I am definitely going to do another relay, and it may just become a tradition for our team, “How the West was Run.” See you at the finish line!

Read more about running a relay in this article where Spencer talks about his experience in the Ragnar Relay!

1 thought on “Why (and How) You Should Run a Relay”