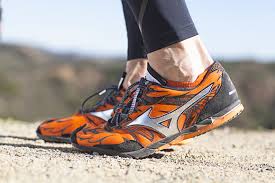 Minimalist-style running has become popular over the last few years. Thanks to the availability of things like Vibram FiveFingers and Nike Frees (some of the most popular minimalist shoes), and exposure through books like Born to Run, minimalist runners seem to be everywhere. A lot of people are curious about the topic, or want clarity on the terms and concepts they hear, so I want to share some information to make sure we’re all informed. Minimalist shoes are their own specific type of shoe with unique characteristics, advantages, and disadvantages.

Minimalist shoes are aptly named. They are lighter, with less structure, cushioning, and support than traditional running shoes. Though there is some gray area one exactly where the line falls between minimalist and other categories of shoes, the general guideline is that the heel should be 8mm–4mm (or less), and weigh around 9 ounces or less.

It’s easy to understand why a lighter running shoe would be preferred over a heavier one, but why do people want a low heel or flat sole with more flexibility and less cushion? Well, some people think that it is unnecessary to have cushioning and support. One reason is that you should be able to feel the surface beneath your feet so that you can change your stride if needed, avoiding injury. Having extra cushioning and a more rigid midfoot takes away those extra senses you have in your feet while running. Some claim that the extra cushioning doesn’t even help your joints, making the cushioning basically just extra weight. Also, having a lower drop (less of a difference between the width of the sole at the heel versus the toe, also known as the heel-toe drop) promotes a midfoot strike, the preferred gate for runners. Traditional running shoes can make it easier for people heel strike, or to come down on the heel of the foot with their foot still outstretched in front of them. That’s really rough on your legs, and not the most efficient way to run, so lowering the heel makes you want to lean forward a little, and hit the ground on your midfoot while your foot is under your body. That’s accepted as the ideal form.

Keep in mind that not everyone agrees, and no matter who you talk to, you’re going to get different opinions. It’s important to do what’s best for you to avoid injury, and to look for good evidence behind claims. Luckily, there have been some good studies looking at things like injury prevention and minimalist running.

It was pretty big news in fall of 2013 when a study comparing supportive shoes versus minimalist shoes was published. Published in the British Journal of Sports Medicine, the study entitled “Influence of midsole hardness of standard cushioned shoes on running-related injury risk”  found that cushioning and support really don’t make much of a difference compared to shoes with a soft midsole. From a summary in Medical Daily:

“The results do not support the common argument from the running shoe industry that runners with higher body mass should be recommended shoes with greater shock-absorption characteristics,” [said] Daniel Thiesen, lead author and member of the Sports Medicine Research Laboratory of the Department of Public Health in Luxembourg.”

This isn’t definitively saying that everyone should be able to jump into a minimalist shoe and do great, but it does show that more cushioning and support does not mean fewer injuries. You can read the full text of the study here.

If you decide to try a minimalist shoe, remember that you really need to do it gradually so that you don’t risk bone injury. Then you can consider which shoe is right for you. There are many more choices than what I am going to mention, but these are the ones I’ve experienced. Feel free to add suggestions in the comments!

When I worked at a running store, a very popular option was the Brooks PureProject collection. From BrooksRunning.com:

“The next evolution of Brooks PureProject is here. Seize every run with these radically light and flexible turn-huggers, designed to align your stride for a more natural ride. It’s all made possible with the development of five unique technologies, plus an awesomely new upper design that wraps the foot for a next-to-nothing feel.”

That’s the description for the most recent iteration of the Brooks PureProject, but the basic idea is that they have minimalist shoes that represent several steps ranging from just a little less than a traditional shoe, to a model that is much lighter, lower, and more flexible. This makes the PureProject line an easy way for people to try something as a step down from a traditional shoe without making a radical jump to a barefoot shoe.

Nike Frees are another popular choice. I bought a pair on a whim when I was at a sidewalk sale at a running store and found a pair of the men’s shoes that were in my size (a very small size for a man, but just right for me!). I tried to run a couple miles in them once, not knowing any better, and couldn’t even make it a mile. I wasn’t used to the style of running required, and I didn’t have the muscle buildup for shoes like this. Nike explains:

“Nike Free shoes are specifically designed to let your feet move more naturally and freely than traditional athletic shoes. Over time, this helps make your feet stronger. But because you’ll be using some muscles in your feet more than you might be used to, it may take some time for them to get used to all that freedom. To give your feet time to adapt, we recommend you transition into using your Nike Free footwear gradually.”

Yeah, I don’t read instructions. The good news is that I kept wearing them as walking shoes and found that I loved them. They’re pretty cool kicks. I think that they did help me make my feet stronger, and they were great to wear to the gym. These are the reasons they’re so popular—they comfortable, recognizable, and have benefits for runners and other types of athletes.

And finally, is the minimalist trend still growing? Maybe not. Though it seems that most running circles have a fair number of people running in minimalist style shoes, expressing their interest in reducing shoe weight and support, some sources are saying the trend is on it’s way out. In the first quarter of 2013, sales of minimalist shoes declined more than 10%, while control and stability shoe sales went up. Runner’s World notes:

“The decline in minimalist sales isn’t surprising. Starting in early 2012, industry insiders noted a movement away from the more barefoot-style minimalist shoes toward conventional-looking running shoes that were lighter and lower to the ground than in years past.”

It seems the popularity of minimalist shoes has changed traditional shoes to the point where the middle ground—being lighter, more flexible, still supportive and cushioned—is the new normal. Even if you don’t want to run in a minimalist shoe, most people agree that a move for conventional shoes to be lighter and more flexible is a good thing for the evolution of running.