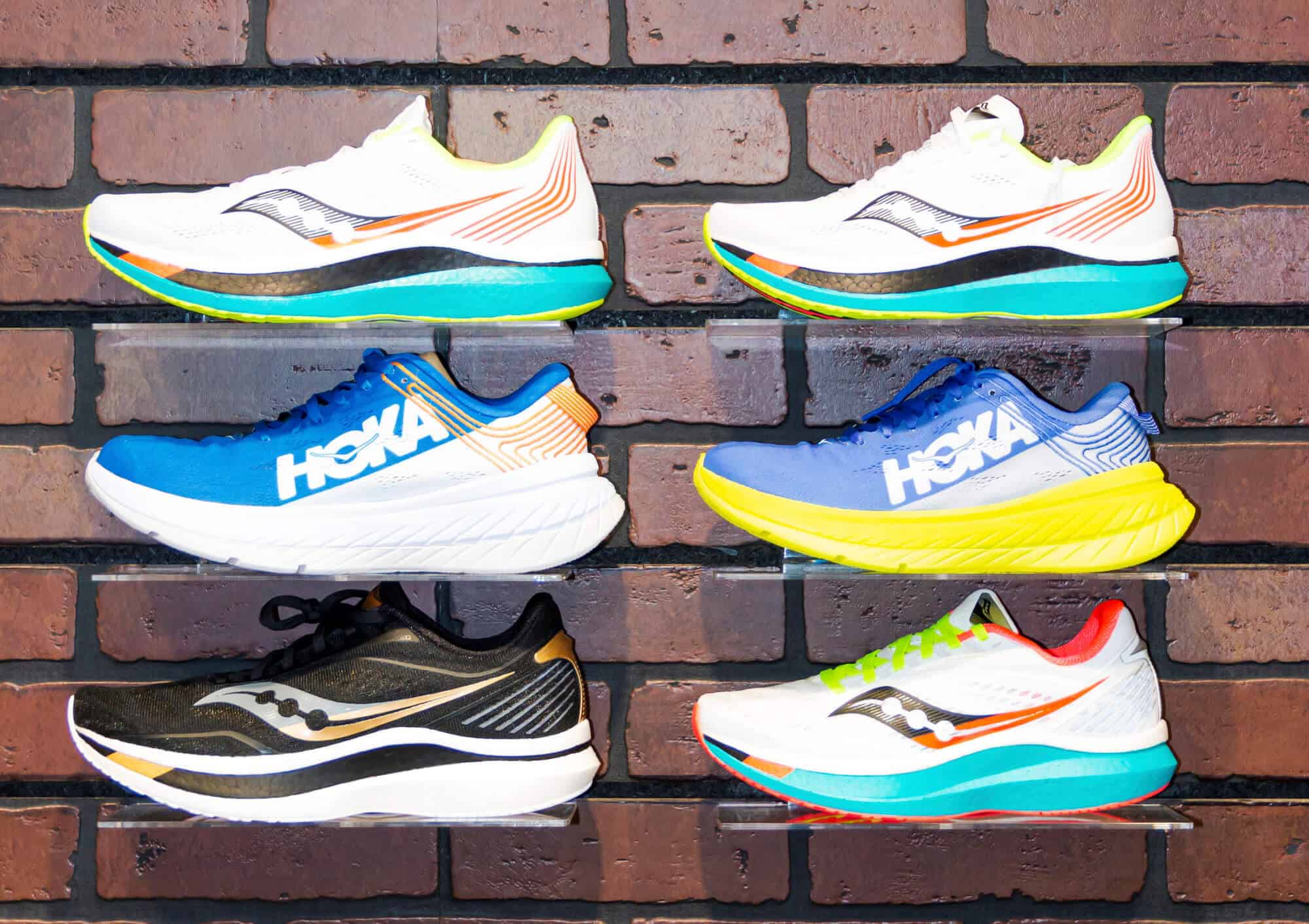 Nike is the uncrowned king of sports apparel. It’s dominated the footwear industry for decades, ever since its inception in 1964.

Hoka is one of its many competitors, known for its oversized soles and maximalist design. It’s comfortable, stable, and supremely durable—but is it better than Nike?

In this Hoka vs Nike running shoes guide, we pit Hoke and Nike head to head to help you choose the right footwear for your next marathon.

With over 1,000 retail stores across the globe, Nike is undoubtedly one of the biggest and most popular suppliers of sports equipment and footwear apparel there is.

Like most companies, Nike started off with humble beginnings.

It was founded in 1964 by track-and-field coach Bill Bowerman under the name Blue Ribbon Sports and was later changed to Nike in 1971—after the Greek Goddess of Victory.

The company almost instantly became a hit, competing with the likes of Adidas (ADDYY) and Pumas (PUMSY) which had then dominated the market.

It was cheaper than the latter two brands but just as high-quality and comfortable. It wasn’t long until it was globally loved.

Today, Nike has surpassed all of its competition in the market—at least when it comes to footwear.

In part, Nike’s success is owed to big-budget advertisements and sponsorships of high-profile sports and athletes, such as Kobe Bryant, Neymar, and Cristiano Ronaldo. 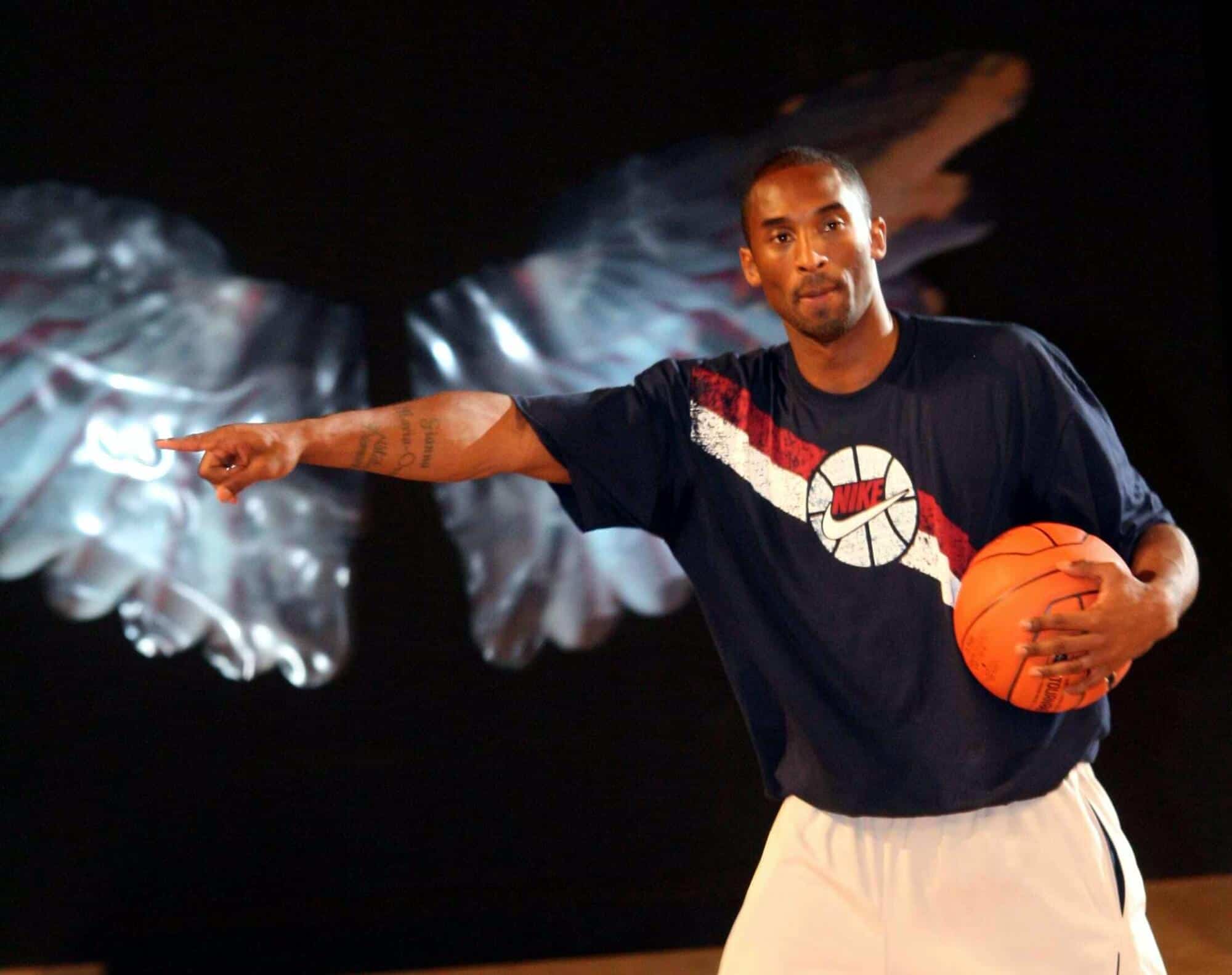 However, its popularity is also attributed to its high-quality and ingenious shoe designs.

A company can only go so far with advertisements; if they don’t deliver the product, they’re pretty much good as dead.

Nike delivers and exceeds expectations, so it isn’t a surprise that it’s so popular today.

Impact on the Environment

Nike is among the few multi-billion-dollar companies that use eco-friendly and recycled materials in its products.

Although it still has a long way to go to truly become an environment-friendly company, it’s doing the most it can with the resources it’s given.

Furthermore, it has set a science-based target to reduce greenhouse gas emissions to 65% by 2030 and net zero by 2050.

Hoka One One: A Brief Overview

Founded in 2009 in Annecy, France by Nicolas Mermoud and Jean-Luc Diard.

Hoka One One (pronounced Hoka On-Nay On-Nay) is an athletic shoe company that produces high-quality running shoes and sports equipment.

The word “Hoka One One” comes from a Māori phrase that loosely translates to “fly over the earth”—a phrase that perfectly describes Hoka running shoes.

Hoka is one of the first companies to produce shoes with oversized outsoles. This was a bold move on Hoka’s part, especially since minimalist shoes were trending at the time of the company’s founding in 2009.

With competition from the likes of Adidas, Nike, and Puma, Hoka is but a “baby” in the world of running shoes.

But although not as popular as the aforementioned companies, it’s still considered one of the best athletic brands in the sports community.

Hoka shoes are a huge hit among ultra-marathon runners due to their extra cushioning and impressive stability.

It’s also popular among nurses, doctors, and other non-sport professions that require walking on hard surfaces all day.

Impact on the Environment

When it comes to sustainability, the brand uses eco-friendly materials including recycled materials in its products. It sources 90% of its materials from sustainable suppliers.

Hoka vs Nike Running Shoes: Which Brand Is Better?

Here are the biggest similarities and differences between Nike and Hoka running shoes:

The upper sole, or simply “upper” for short, is the part of the shoe that covers the foot, including the toes, the sides of the foot, the top of the foot, and the back of the heel.

True to its name, Dynamic Fit reduces the space between the foot and the sides of the shoe with its ultra-soft cushioning to ensure the perfect dynamic fit.

On the other hand, Flywire uses the lightest and strongest material possible to minimize the weight and maximize the support of the shoe while running.

Flyprint is the most intricate of the three. It uses 3D-printed textile to digitally develop the highest-fidelity design possible in a shoe.

Hoka employs a tight-fitting toe box design in almost all of its running shoes except for a selected few.

Although snug, it doesn’t feel too tight. In fact, most of Hoka’s shoes hug the foot quite well.

The shape and design not only encourage a smoother, more efficient walk but also guarantee comfort across the board.

The outsole refers to the hard material on the bottom of the shoe that comes in direct contact with the ground. It’s often made with rubber, polyurethane, and other synthetic materials.

Nike’s outsoles have evolved dramatically over the years. Depending on the model, you can get translucent, traditional, multicolor, and outdoor (XDR) outsoles. 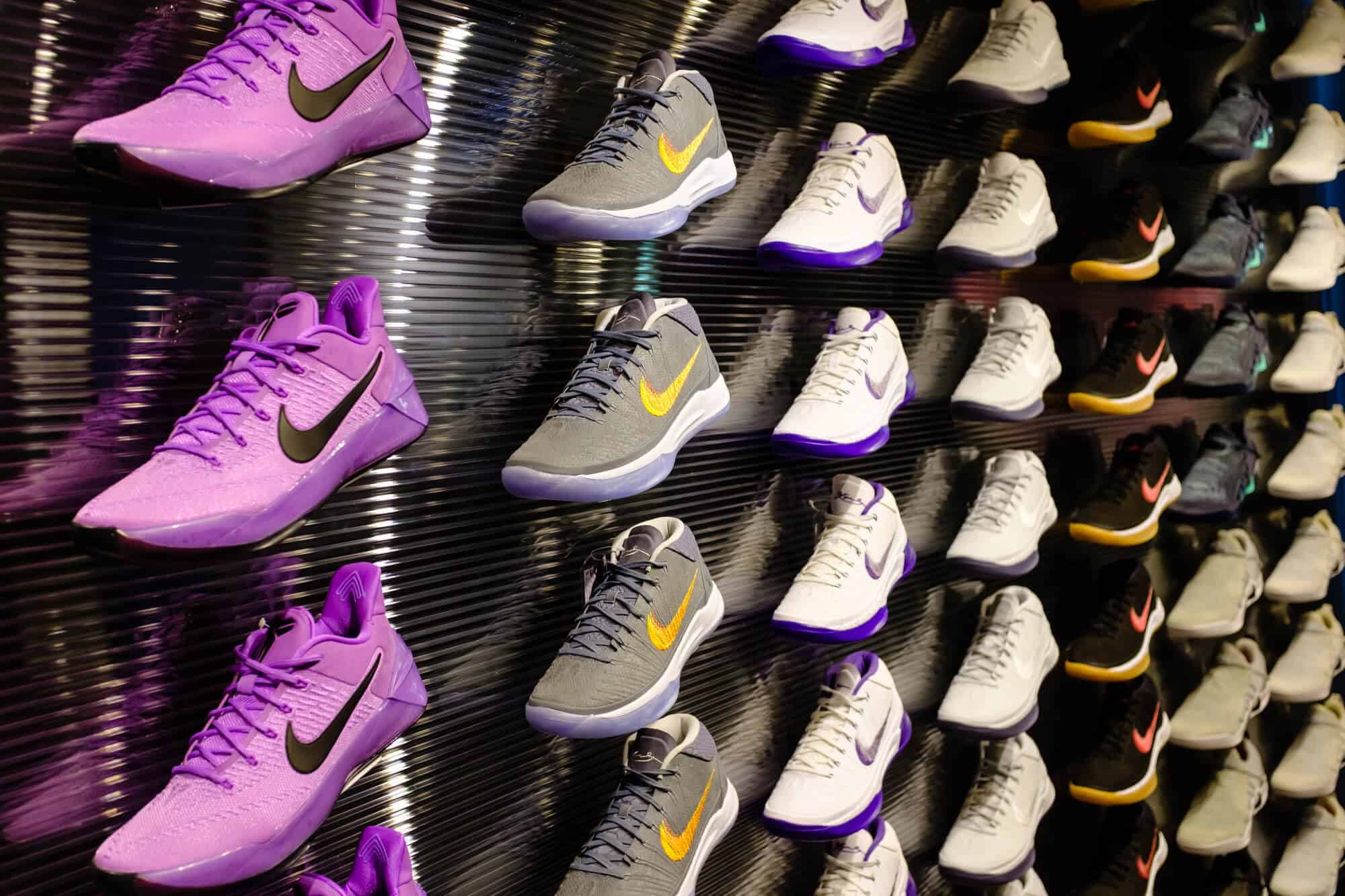 These outsoles mimic the natural curve and movement of the foot to prevent injury as much as possible.

Hoka’s outsoles are considerably larger than Nike’s—and really, most other shoe brands that exist today.

Hoka prides itself on its maximalist shoes and it shows, as most of its products have extra-large outsoles.

Hoka’s outsoles aren’t that much different from Nike’s in terms of material. It’s also made from rubberized foam to give runners that extra bit of spring on their steps. Since the outsoles are quite large, they’re responsive to fast movements.

They also provide flexibility and absorb bumps in the road.

Dubbed as “bucket seat midsoles,” in reference to the comfort of a race car’s bucket seats, Hoka’s shoe cushioning is built for long-term support and comfort.

Most are softly cushioned, though some lines ups use firmer RMAT foams to appeal to every type of customer.

All in all, Hoka’s cushioning falls under the “just right” category most of the time; not too soft nor too firm. They have just enough cushioning for safe landing and push-off.

Nike isn’t that far behind in terms of midsole comfort; in fact, Nike has produced some of the most comfortable running shoes in the world.

Most of Nike’s midsoles are made with ZoomX foam, which, according to Nike, is “designed to maximize speed by delivering greater energy return.”

ZoomX used to only be available in aerospace innovation, but Nike has always been known for its ingenious shoe technologies—and its midsoles are one of them.

This design isn’t unique to Nike as Hoka uses the exact same technology in its Carbon X series.

In both cases, the carbon fiber embedded midsoles greatly improve running efficiency and helps you generate a forceful toe-off.

Nike and Hoka have the same lifespan as any other high-quality brand: 300 to 500 miles. 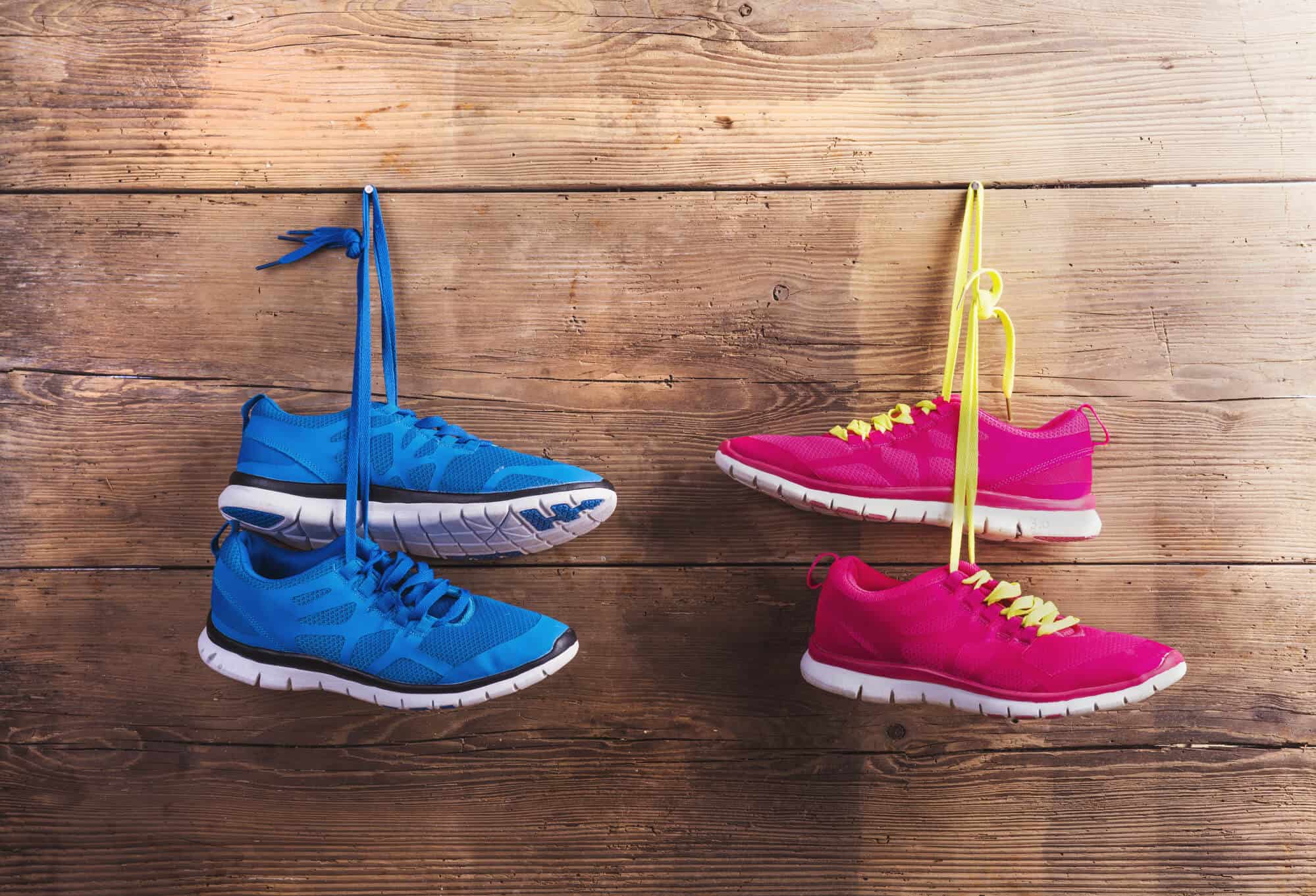 So, if you run about 20 miles per week, your Nike and Hoka running shoes will last you anywhere between four to six months.

They’re both designed to withstand basic wear and tear, as long as they’re used for their intended purpose.

Hoka has a slightly longer lifespan of around 600 miles thanks to its thick cushioning and outsoles. Its maximal design protects the shoes from damage attributed to rough surfaces and continuous impact.

That said, Nike is a bit more affordable than Hoka because of its massive consumer base.

Nike is catered towards the general public, while Hoka is designed for athletes, professionals, and actual runners.

We hope our Hoka vs Nike Running Shoes guide helped you pick the brand of your next footwear!

To summarize, Hoka running shoes are much “thicker” and more comfortable than Nike shoes.

They have extra-cushioned midsoles and large outsoles to add a bit of spring to your steps. They’re also more durable than Nikes.

On the other hand, Nike excels in the technological aspect of footwear design. Although not as comfortable as Hoka running shoes, Nike excels in fast, light performance shoes with a ton of traction.