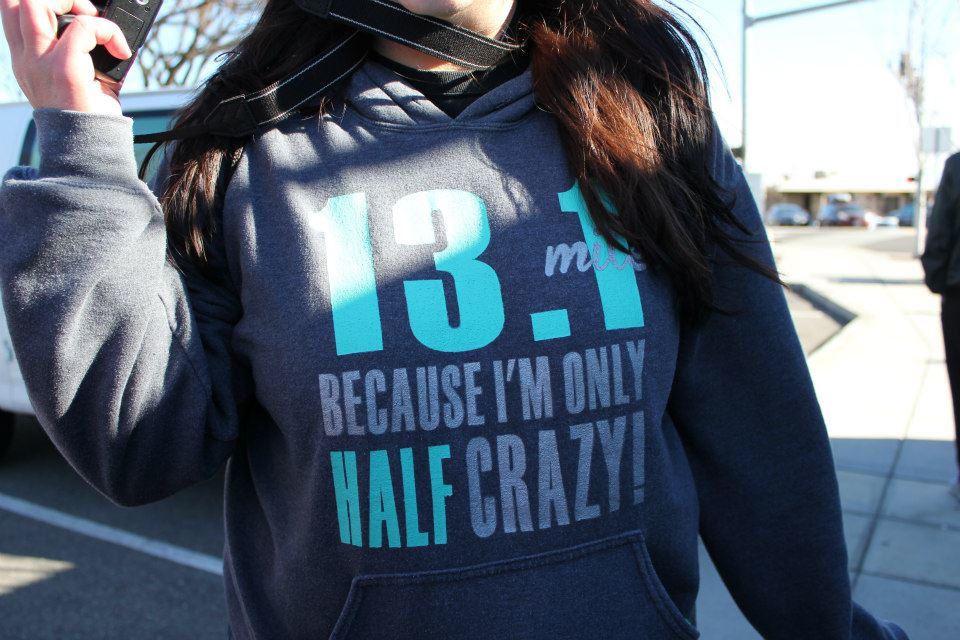 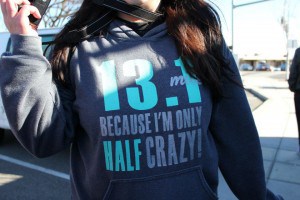 I was reading an article in a recent issue of Northwest Runner when I came across some words that sounded somewhat familiar which stated:

“My freshman year in high school, the ’81-82 school year, was when I discovered my extreme dislike for it.  It was painful, provided no satisfaction, and wasn’t any fun at all.  Coach Q told us that it hurt at first but once our bodies got used to it, we would enjoy it.  I wasn’t buying it.  The best part for me was the shower afterward.”

Those words came from Tom Harvey who provided an excerpt from an upcoming novel he is writing but if you change the school year and the name of the coach that sounds exactly like what my wife J.J. shared as her perspective on running was when we got married.

J.J. has never claimed to be a runner and much of our married life has been filled with conversations about her disdain for the sport I claimed was fun.  After all what is fun about getting all sweaty, tired, sore, and well choosing to purposefully engage in something that is used as punishment in every other sports.  I have to admit those are valid points 🙂

Our First Race Together

I think our running future together got off on the wrong foot back when we met in 1997.  At the time I was living with my Aunt and Uncle in Bristol, TN getting ready to start school at the University of Tennessee.  J.J. was living in Southwest Virginia and we had gotten to know each other through church.  We actually got to be very good friends but it wasn’t like you would think since she was actively dating someone else.

Our church was putting on a 4th of July celebration that involved picnicking, games, socializing and, oh yes, a fun run.  There were two fun runs actually, one that was about 2 miles for the older people and one that was 0.5 miles for mainly the kids.  I had planned on running the 2 miler and J.J. had promised to be there to watch me run.  While we were in no way romantically involved, the thought of having her there to watch the race filled me with excitement.

I got to the race site that Independence Day morning but J.J. was nowhere to be found.  Turns out she had to go pickup a friend of hers on her way to the picnic and well that friend was not what I would call a punctual individual.

The race involved a couple of laps around a neighborhood.  While she was not there for the start, I was confident I would see her when I came through on the first lap so I tightened up my form about a quarter mile in advance and took the lead in the race.  Finishing the first lap I did not see her anywhere and unfortunately I would not end up seeing her until she arrived with her friend about 5 minutes after I had won the race.

She was mortified that she missed the run and knowing her feelings about running I, in my ever sarcastic way, told her the only way she could ever make it up was to run the half-mile fun run.  I was totally kidding but she took me seriously and started to head over to the start line with a large pack of mainly 3 to 10 year-olds.  I told her I was kidding but she insisted that she was going to do it.

I guess the chivalrous thing to do would have been to run with her. Oops…  Being the dumb stupid kid I was, I decided I was in it to win it since the fellow J.J. was dating at the time decided to run as well and had been boasting about his exploits as a former high school cross-country runner.  He needed to be crushed!

The race was off and I bolted off while her significant other was initially on my shoulder.  We got to a nearby hill and, well, I never saw that guy again as I charged to the finish line having sealed a double victory.  Unfortunately, I did not see my future wife anymore either until she came trotting across the line after, well, everyone else in the race.

She described her experience best when she reflected on how she was trying desperately to reach the end alive when a 3 year-old came up from behind, gave her a devilish smirk, before quickly scampering to the finish leaving her in his wake.

I am not sure she has forgiven me yet for that one.  Needless to say after getting off on that foot our budding relationship was not focused around running… 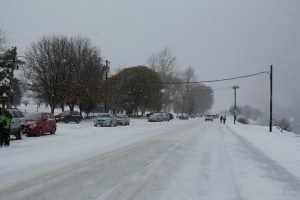 Throughout our early married life, running was no real part of it.  Rather we chose to build on our common love of the outdoors, camping, hiking, and well pretty much anything other than running. 🙂  Sadly, that is when the scale started being mean to me and I chose to get back into running.

Then it happened.  One day at the end of the summer, she decided that participating in a 5k herself would be goal that she wanted to accomplish.  Being the “supportive person” that I am I had her signed up for the 2010 Turkey Trot in Kennewick, WA probably before she even finished the sentence “I want to do a 5k.”

She did a great job working up to being able to run a 5k by using the Couch-to-5k Running Program.  By the time the race rolled around she was certainly ready.  She had put in the work and even had a time goal for the race.  I was prepared to watch the kids and be as supportive as I could be. 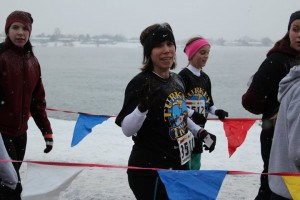 Unfortunately, Mother Nature was not quite as supportive of her reaching her goal.   Before the race there was several inches of snow that came unprecedentedly early in the season, much of which had melted and refroze leaving the race course covered with a nice thick layer of ice.  If that was not enough, the weather gods decided that several inches of snow on top of that ice layer would be fun and hey, if we can make it 10 degrees outside and start a nice cold wind during the race, that would be nice also.

Her first and only 5k ended up being more of akin to an episode of Survivor than a fun run.  Since the race course was so slick, the directors modified the course the morning of the race making it basically multiple laps around a loop in Columbia Park.  One problem – there were like 3000+ people there for the race and many of them walkers.  The race turned into a moving mosh pit with a strong wind trying desperately to blow everyone down .

When the horizontal snow started during the race all I could do was laugh.  I had to stage kids in the bathroom just to keep them from freezing to death.  To date, this is by far the craziest race I have ever been associated with.  Sadly, that is the only 5k J.J. has had the opportunity to participant in.  Of all the times she has come and support me when I was running in pristine conditions and now she gets this – wow, bad running karma. 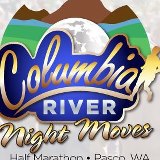 After she finished the race, J.J. understandably announced her early retirement from the sport….  Actually she has continued to run a few miles here and there and is actually better than she gives herself credit for.

At the Expo for the Tri-Cities Half Marathon this past February, I noticed they were going to be doing another half-marathon in the Tri-Cities this summer.  The interesting thing was that when I told J.J. about the Columbia River Half-Marathon, instead of being her usual supportive self who accepts and encourages me to participate in such events, she paused, sort of looked at me and said, “do you think there is enough time between now and then for me to get ready to run it?”

After a pause of my own, trying to verbalize something while returning from a state of disbelief, I said you should consider yourself signed up.  By the next day, I already had her registered for the race and her training plan put together.

The Columbia River Half-Marathon is being put on as part of the USRA Half-Marathon series and will be held in Columbia Park on July 6, 2013.  I am very much looking forward to this event, not because I will be running it but because I again get to find myself hanging out with the kids cheering J.J. on as she looks to accomplish her new running goal.

This race will be interesting in that regard since several of the friends that I normally train and run races with are going to be performing similar duties during the Columbia River Half as many of their wives are running as well.

She has been excited about getting going and has been running a couple of days a week to ease into the structured program.  Several of her friends have also signed up and she is looking forward to training with several of them as a group.

As I think about where J.J. has come from in terms of her relationship to running, to where she is now embarking on an ambitious goal of running a half-marathon, I cannot help but admire her.

Really that is what Runner’s Goal is all about – people who are looking to set and achieve goals for life success.  It does not matter who you are or where you come from – each and every one of us belongs to and can find support in the Runner’s Goal community.

3 thoughts on “Can You Run a Half-Marathon if You Hate to Run?”