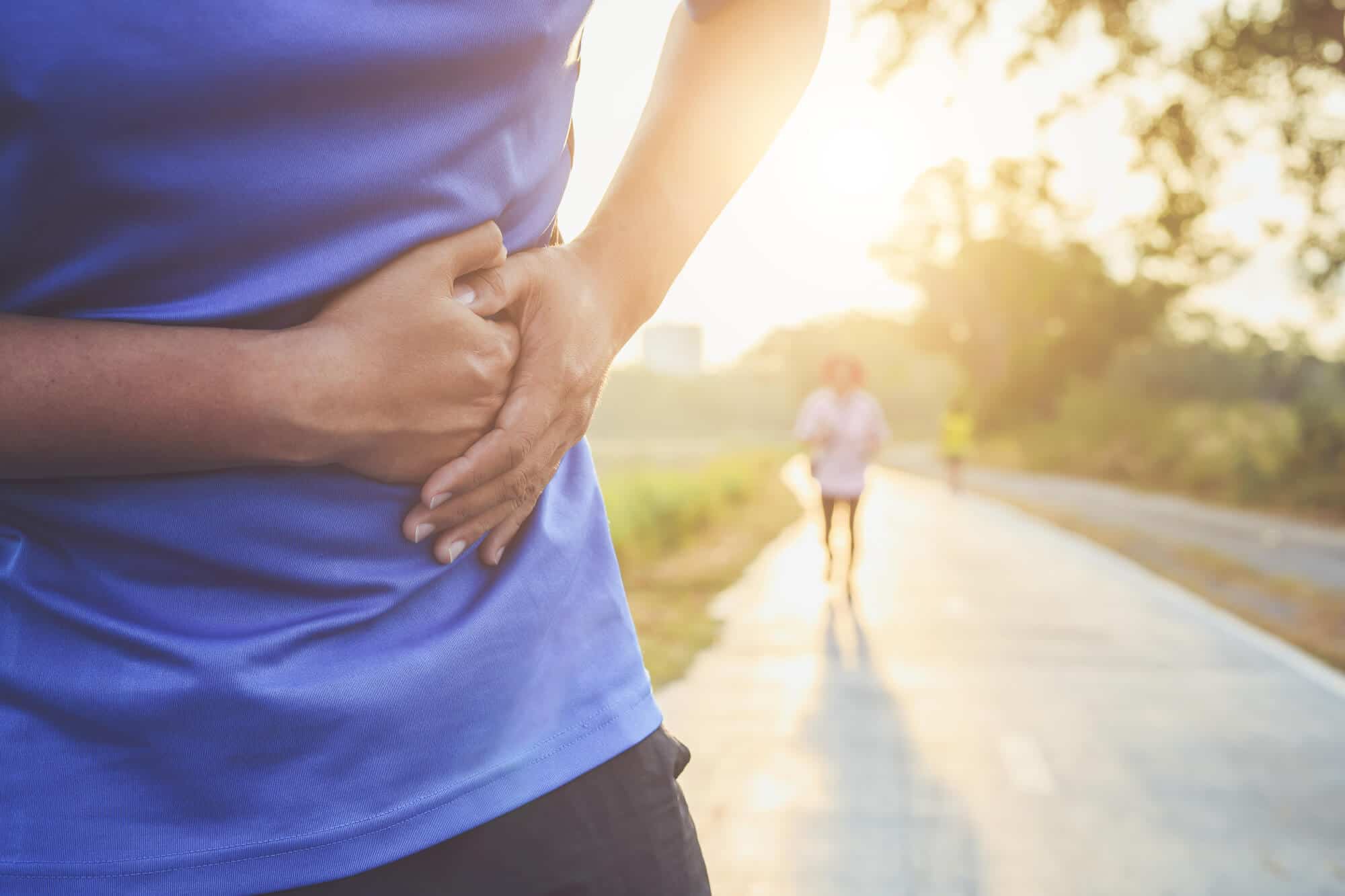 You’ve been training for the race for quite some time now. You’re ready to give it all you have, but your side starts hurting once you break out into a run.

It feels like knives are pressing into your side, and as far as you know, you haven’t pulled a muscle.

So you start asking yourself, why does my side hurt when I run?

There could be various reasons for your side hurting, but more often than not, it’s because of side stitches. If you don’t know what those are, read on!

Why Does My Side Hurt When I Run?

Your side hurts when you run because of side stitches, which are basically muscle cramps. Side stitches occur when you’re breathing irregularly or when you’re running too fast.

However, they could also happen for no reason, even when you’re doing everything right.

You’ll mostly notice the pain when exhaling and when your foot hits the ground. When that happens, the muscles in your sides expand, causing the pain.

What Are Side Stitches?

Side stitches are, in one way, muscle cramps. When running, you inhale and exhale stronger than usual.

If you’re hitting the ground with your foot as you’re exhaling, the muscles around your ribs will probably cramp on that side.

They already keep constricting and expanding as you’re running, so when you run too fast or take a breath the wrong way, they’ll cramp, thereby causing a side stitch.

The running motion isn’t the only thing that causes this; it also happens because your diaphragm works overtime when you’re running.

Paired with your legs’ movement, a side stitch will happen.

More often than not, side stitches happen because of a bad breathing pattern rather than an actual muscle strain.

When the diaphragm moves out of harmony with your body, the small muscles in the area may cramp, causing a side stitch.

Do Side Stitches Only Happen When Running?

No, side stitches can happen to anyone doing any sport.

One study in 2009 was carried out on 965 athletes to conclude how many people encounter abdominal pain and side stitches when working out.

As it turns out, 69% of runners encountered side stitches and abdominal pain while running. Surprisingly enough, most other athletes did as well.

For example, 62% of the riders, 47% of basketball professionals, 75% of swimmers, and 32% of cyclists had side stitches at least once while working out.

As you can probably figure out, side stitches are more common in sports that include the torso and sides.

This is because you’re prone to pulling your side muscles in any of these sports because of a wrong movement.

How to Deal With a Side Stitch When You’re Running 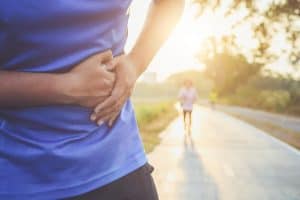 When you’re running, and you feel abdominal pain suddenly, the only way to stop the pain is to take a rest—as you’d do with a muscle cramp.

You’ll have to stop running and regulate your breaths to get them back to normal.

You can also stretch your body briefly before attempting to run again to get blood flow to your muscles.

You can easily stretch your sides by extending both arms up and bending sideways a couple of times. Then, take a couple of deep breaths and proceed.

Why Do Side Stitches Happen?

A lot of research was carried out to know why side stitches happen, and there isn’t a definitive answer. There are a couple of causes, but they’re not always the reason.

Anyway, here are the most common causes of side stitches while running.

If your breathing is fine, the cause of side stitches is likely ligament irritation.

When you run too fast, you’re putting downward pressure on your abdomen, which causes the ligaments in this area to get stretched—sometimes beyond their limits.

As a result, you feel a sharp pain in your sides, as well as hip pain in some cases.

That’s why running right after eating is more likely to cause side stitches. Y

our stomach likely gets bloated when you eat, even if you don’t notice a difference. So, the ligaments are more prone to stretching and causing pain.

As I briefly said before, side stitches can happen when you’re following a bad breathing pattern.

If your breath isn’t regulated, you’ll be putting a lot of pressure on your diaphragm, which will eventually cause it to spasm.

When the diagram spasms, it contracts and expands much faster than it should, causing a sharp pain in both sides or one side.

You’ll likely feel the pain in each side when you’re hitting the ground with the foot on that side.

Diaphragm issues are more common with beginner runners who haven’t learned how to regulate their breathing with their running yet.

When you’re running in an incorrect posture, you’re putting stress on the spine, which may be why you have side stitches while running.

Whether you notice it or not, you tend to rotate your torso when running.

Unfortunately, when this happens, you’re unknowingly applying pressure to the vertebrae, which may cause side pain.

That’s why people with kyphosis—a curved upper spine—are more prone to side stitches.

The theory was tested in a study that was published in 2004.

As it turns out, half of the runners included in the study encountered the same pain of side stitches when they had pressure applied to their vertebrae.

If you haven’t been focusing in your biology class, you may not know what the parietal peritoneum is, but it may be why your sides are hurting.

The peritoneum is the cavity that surrounds your whole abdomen.

It includes all organs in the area except the adrenal glands and the kidney.

Likewise, the parietal peritoneum is a thin membrane around these organs, lining the diaphragm, abdominal wall, and pelvic area.

This membrane can easily get irritated when running because running puts pressure on all the organs inside.

When it does, you feel the pain in your sides and abdominal wall because that’s where the membrane is.

How to Prevent Side Stitches While Running

Although a side stitch isn’t dangerous, it can put a damper on your running mood.

It’s painful, persists, and may hurt again once you start running. So your best bet is to avoid getting one from the start.

Granted, that’s not easy, especially because side stitches often occur for no obvious reasons.

But there are still some steps you can take to minimize your chances of developing a side stitch. Here’s a roundup.

If you know how to regulate your breath with the motion of your legs, you significantly lower your chances of developing a side stitch.

In a way, you’ll be keeping your diaphragm from convulsing as you’re running, which prevents sudden side pain. 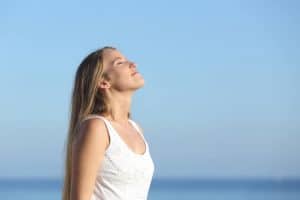 To prevent side stitches, it’s better to avoid sugary drinks before running. They can increase your chance of getting a side stitch because they cause bloating.

Likewise, it’s better not to eat a large meal before the workout. If you eat, try to keep it limited to light foods that give you energy. 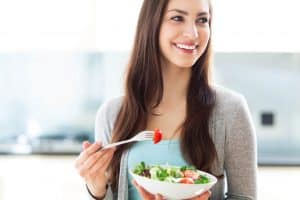 If you haven’t been very keen on stretching, you should start doing so.

Before running, you’ll want to stretch your sides, back, abdominal area, and hip joint to ensure the muscles are ready for the effort.

To stretch your waist properly, raise your arms and bend sideways. Keep the position for 20 seconds, and bend the other way. 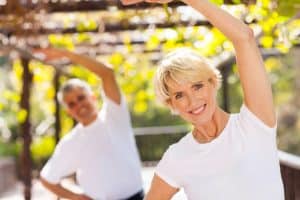 How to Know If Your Side Pain is a Side Stitch

Although most of the time, the pain in your side is a result of a side stitch, that’s not always the case. So, how to know if it’s something else?

Well, for one, if the pain is sharp and comes out of nowhere, it’ll be a side stitch.

It’ll also not go away with running, and there’s a high chance your shoulder will be in pain too. Some people, although a few, reported having chest pain as well.

On the other hand, if the pain is well below the diaphragm and you just ate before running, it could result from a regular stomachache.

If you feel leg pain with the pain in your sides, it’s probably not a side stitch.

Closing Thoughts On Why Does My Side Hurt When I Run

Your side is hurting when you run because of a side stitch.

If you learn how to regulate your breathing and do your stretches, you should be able to avoid them.