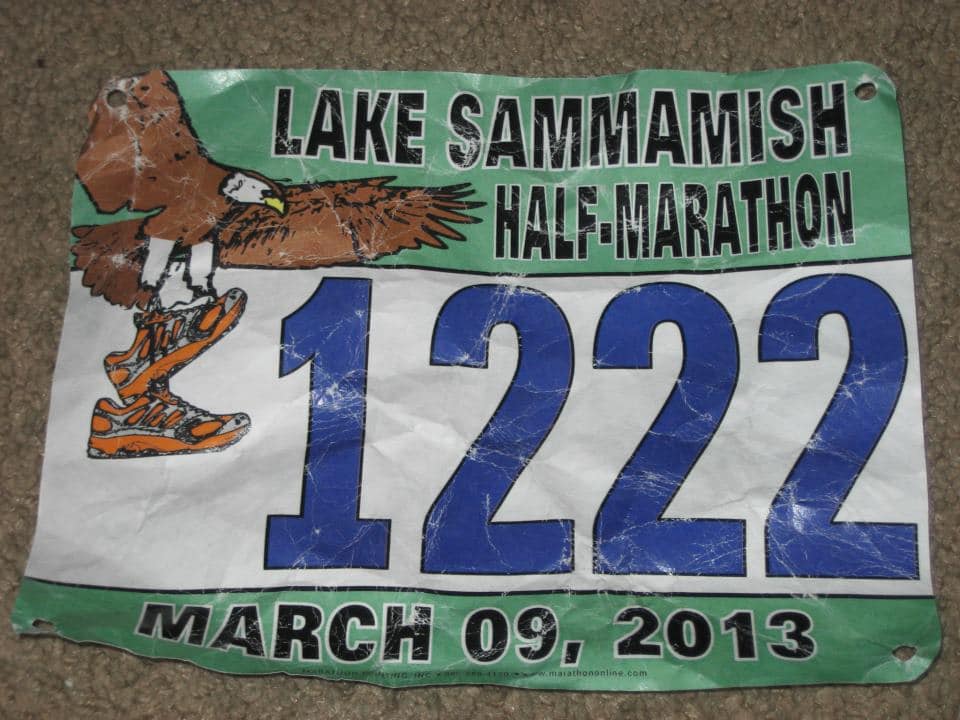 On March 9, 2013, Evergreen Trail Runs held their 4th annual running of the Lake Sammamish Half-Marathon in Redmond/Issaquah, WA.  The Lake Sammamish Half-Marathon is a gem of a race on the Seattle Eastside and has always had a special place in my heart.  It was my 2nd ever half-marathon when I ran it back in 2011 and was such a good experience that is gave me confidence that I could not only be successful at that distance but also helped establish the half-marathon as my favorite of all of the standard race distances.

While I did not run the race this year, I was certainly closely following it because I had two friends, Steve McDonald and Kelly Jensen, who chose Lake Sammamish for their first ever attempt at that distance.

I got to know Steve and Kelly while I was living in North Bend, WA.  Steve started getting into running last year in an effort to get ready to run the Ragnar Relay – Northwest Passage in 2012.  Steve recently provided a guest post for Runnersgoal.com that takes an in-depth look at the thoughts, feelings, schedule, insomnia, frustrations, triumph and much more when going through a half-marathon for the very first time (click here for article).

Kelly Jensen is an avid recreational runner from North Bend, WA but this was his first half-marathon as well.  Kelly is the owner and President of Plateau Jewelers in Sammamish, WA.

As I was reflecting on the experience of my friends and contrasting it with the experience that I had running the race during its 2nd annual running, I could not help but conclude that Lake Sammamish is the perfect event for your first half-marathon.

I asked Steve what his deciding factors were for choosing Lake Sammamish for his first half.  His response was one of timing, convenience, and anticipated atmosphere since the event itself was not only close to home but also was on his birthday.  Steve was also looking for an event with a nice atmosphere and Lake Sammamish certainly did not disappoint.

At this point in my life I have run a number of half-marathons and experienced a broad diversity in terms of what each event has to offer.  I have also had a number of friends who have broken into the half-marathon distance within the last few years, many of which have had different experiences of success and challenge.

So how does Lake Sammamish stack up for first-time half-marathoners against these characteristics?  Let’s take a look…

Half-marathons are now one of the most popular distances and most moderate sized major cities host such events these days.  The typical advice is to try to select a half-marathon that is somewhat close to where you live for your first one so you do not have to deal with the logistics of travel and this allows you to have more family and friends there to cheer you on.

The Lake Sammamish Half-Marathon is located in on the eastside of Seattle, between Redmond and Issaquah, and conveniently located for the majority of the Seattle population and accessible to other parts of Washington State.

While I live on the eastern side of Washington State and am very partial to the area, I would not hesitate for a minute to head over the mountains to run Lake Sammamish given my experiences with half-marathons on both sides of the state.  The only problem is I do not think I could convince all of my friends to road trip with me as a cheering section. 🙂

For your first ever half-marathon what you want is a course that is not too difficult.  Courses that are too hilly not only sap you of energy but also can lead to a negative experience which is not what you are looking for the first time around.  You can save those hilly difficult ones for when you are a hard-core runner looking to do Leadville.  You are also going to want a half-marathon that is scenic with some nice views.

The course itself is about as flat as flat can be.  There are literally no hills which is great for the first time you are trying to complete a race as long as a half-marathon.

The beauty of the location cannot be beat.  The race finishes in Issaquah at the Lake Sammamish State Park basically at foothills of the Cascade Mountain range.  Lake Sammamish itself very picturesque and rivals its more well-known cousin Lake Washington.

Half-marathons are held at various times of the year.  Obviously summers in some locations can be very hot and winters very cold.  The conventional wisdom is to not run your first half in either extreme.  You basically want to choose a time of the year where the weather is going to be pleasant if not a bit on the cool side.

When you run a race you would prefer it to be on the cooler side than the warmer side if you are anything like me.  Personally, running a race when it is overcast and in the 40-50 degree range is perfect for me.  One nice thing about the Lake Sammamish area is that it does avoid the temperature extremes and in March, it is likely going to be on the cool side even by Seattle standards.  Seattle climate is somewhat moderate throughout the year in that you typically do not have extreme ranges of cold or hot.

The temperature is probably going to be in the 40s for the race that time of the year.  Running the race you are probably going to want some long-sleeves on but all in all, you will find that the cooler temperature benefits you in your first half-marathon attempt as it does not sap your energy the way the hot weather would.

Ok…now let’s be honest here, we are talking about Seattle in March.  The chances of rain are going to be fairly high.  It is not going to be a torrential rain but rather that standard Seattle drizzly rain.  I will note that when I ran it in 2011, there was a 60% chance of rain but I never actually saw a drop.  This year was dry as well and once the early fog burned off I understand it was a perfectly beautiful day.  Nonetheless, if rain bothers you, you probably would not be hanging out in Western Washington in early spring to begin with.

For those who are a little more rain adverse, there are benefits to liquid sunshine.  Rain is a natural cooling system and you will find that you will have no problems staying hydrated and can actually go farther and faster in the rain.  There was a period of time when most of my personal best race marks were set in rain.

The one thing that I like about the timing of the race is the fact that it is early in the spring race season.  It gives you an opportunity to see just how much damage the winter break has done to you but also allows you enough opportunity to rest, train and still improve on your marks in subsequent spring races.

When selecting a race for your first half-marathon, you are as interested in the experience as the race itself.  Find one that is somewhat low key but at the same time very well organized and has some energy.

Lake Sammamish is put organized as part of the Evergreen Trail Runs Series and has the amenities of a high quality half-marathon but with a low-key relaxed feel.  Runners can expect chip-timing, custom race numbers, a finisher’s medal, a nice tech-shirt and a race bag full of all sorts of vendor goodies.  After the race there are plenty food options and a lot of great camaraderie among the participants and volunteers.

The race is not what I would call small as there were 1737 finishers 60% of which were female.  This is actually a substantial increase since I ran it in 2011 when in its 2nd year there were only 412 finishers.  Perhaps it is its trail running roots that makes Lake Sammamish have a community feel as opposed to getting swallowed up in the enormity of an event like the Seattle Rock n’ Roll Marathon.

Since there is a fair population of runners at this point you will actually find a well developed race atmosphere.  As a first-time half-marathoner you will be able to feed off of the energy of the other participants and that will help carry you to your goal.  Just learn from my experience (click here) and make sure you do not feed off that energy too much…

It is common for half-marathons these days to provide some sort of reward just for finishing.  This reward is often a race medal given to you when you cross the finish line to celebrate your efforts.

Medals are not that big of a deal for some people but all things being equal, you are going to want to have some feeling of recognition for what you accomplished and long after the  memories have started to fade, you will have a memento to remind you of one of your life’s big moments.

The Lake Sammamish Half-Marathon typically will give out a medal for all finishers.  During their 2nd year the medal was fairly pedestrian but this year the medals were very nice and I would expect that to be a new standard.  My friends were happy about their medals and yes I was just a little bit jealous. 🙂

If you are looking for looking for a half-marathon to break into a new race distance, you can serve yourself well by looking into the Lake Sammamish Half-Marathon.