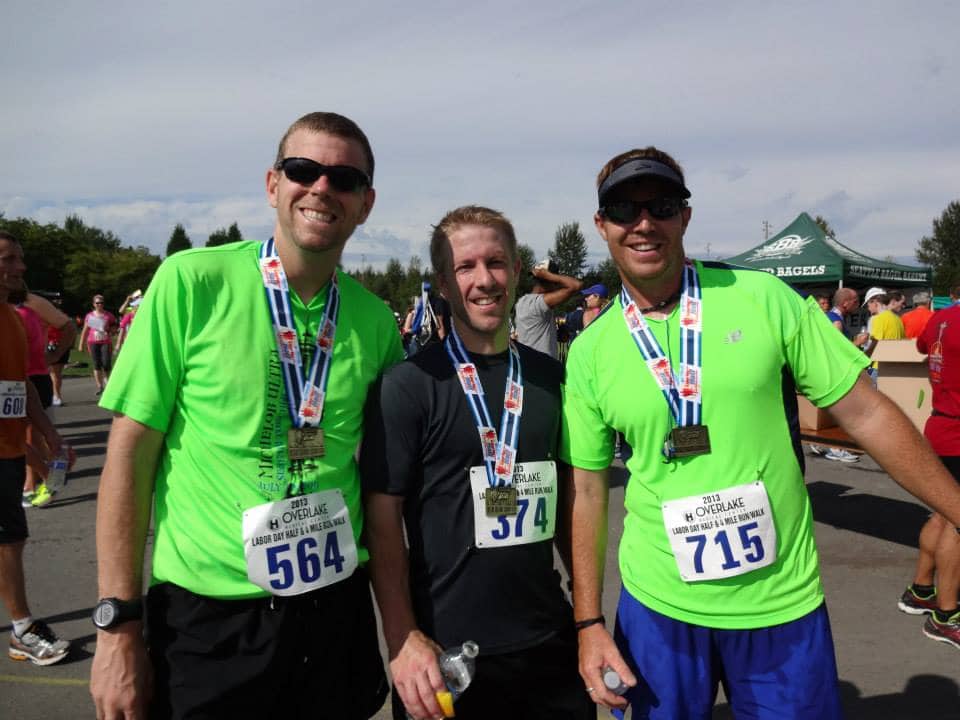 Well, I’ve done it again.  I managed to wait until the month is nearly over before I post my so-called “Monthly reports”.  I guess I’ve been so busy running, that I haven’t found the time to write about it!

I’ve got a lot to report on, since my last official update about a month ago.

As mentioned in that report, I’ve been training for the Leavenworth Marathon on October 5th, 2013.  That’s less than 2 weeks away!  I’ve been running more miles than I’ve ever run in my life, and I also just completed the Labor Day Half Marathon in Redmond, WA just a couple of weeks ago.

I want to cover what I’ve been doing to prepare, some of my physical setbacks (a trip to the ER!), setting a PR, but also some of the thoughts that have been going through my mind as I approach marathon number 4 for me.

Training Over the Past Month

I have to admit, that during several of my runs over the past month, I kept thinking, “Boy I HATE running!”  Have you ever felt like that?

I don’t know if its because I have been running so many miles or because of the hot weather.  Or both.  Many of my training runs have been when its hot outside; apparently August in a near desert climate is not the best time to train for a marathon.

Fortunately, as much as I hated some of my training runs, I’ve stuck with it, because I know that not only does it keep me healthy, but if I can hit my goal time in the marathon, I’ll feel ecstatic!  Also, I keep telling myself that its going to be so MUCH cooler in Leavenworth.  If you haven’t run this marathon before, the race conditions really are ideal.  Running in temperatures of the high 30s and low 40s really does feel good.

So, here’s the training miles that I’ve run over the past several weeks, along with my thoughts:

I ran a 10k race so tapered a bit, so my miles weren’t quite as high as they should have been – read my review of that race here.

As you will see over the next few weeks, I started to have my running affected by allergies.  I usually do not get severe allergies, so this was really odd for me.  This week I was not feeling well (allergies) and missed a day and cut another one short.  I would randomly wake up with a swollen fat lip or have tightening chest/throat.  Weird stuff.

I ran the Labor Day Half Marathon on Sept. 2nd in Redmond, WA, so tapered a little on purpose.  But I also missed significant miles because I ended up in the Emergency Room due to a severe allergic reaction to something…its still under investigation. It seems that my allergies from the previous week, culminated with me eating something that caused a reaction; and gave me a swollen tongue and eye.  I couldn’t hardly talk, and was worried that the swelling could affect my airway, so I let the docs take care of me.

Again, I NEVER have had a reaction like this, and never go to the doctor…so this was all new territory for me.

(This is a picture of me driving myself to the ER.  I knew these photos would be money afterwords, so thankfully I had the presence of my to capture my face when it looked all jacked up!  I also got some pictures with my swollen tongue sticking out, but I’ll spare you those).

After a couple of hours on Epinephrin and steroids, they got me back to “normal”.  While at the hospital, it was kinda funny because they had me hooked up on a heart rate monitor to make sure nothing went hay wire.  Well, the monitor kept beeping because my heart was dropping below normal levels!  The nurse had to come in a couple of times to check.  Finally, we chatted a bit and I let her know that I was a runner!

She said, “Okay, that’s why!”  Apparently having a resting heart rate below 50 is not normal…so the machine actually was beeping because my heart is extremely healthy and rests at a 47 or 48 Beats Per Minute. Just one of the nice benefits of training for a marathon I guess.

(A shot of me in the ER; right after they got me all hooked up…the swelling started to go down shortly after).

Unfortunately, I missed my running that day. 🙂   I visited an allergist a few days later and had some tests done, but he couldn’t find anything I’m allergic to.  I still get hives almost every night (sorry if that’s too much detail!), so something is still going on.  But if I take an allergy pill each day, most of the symptoms are not there…otherwise, I feel pretty healthy now.

I’m just grateful that less than a week after being in the ER, I was able to come out and set a PR in the half-marathon!

I finally started to get my miles back up – although I’m still fighting some allergy issues…which is really odd for me.  I ran the Labor Day Half Marathon and set a PR on September 2nd in Redmond, WA.

I had a lot of fun because I brought my wife and 3 kids, and my friends Stephen and Chris also brought their families.  So we all got to spend the long weekend just hanging out and letting the kids play together.

I kept asking Stephen what his Half-marathon goal pace was, and he just said he was going to take it easy and see what happens.  That should have been my first warning sign that something was up.  I had set a goal of getting 1:37:30 and was mentally preparing.  My PR was 1:40:50, so I at least wanted to go faster than that.

The morning of the race, Stephen, Chris and I did some warm-ups, got our race gear, and lined up at the starting line.  Stephen is a much faster runner than I, so I was surprised that he lined up where I was, rather than near the front.  Again, this should have been another warning signal.  When we started the race, Stephen was right at my side.  After about 30 seconds, I said, “Why aren’t you going faster!?”

He finally confessed that he had been planning for 2 weeks to run the race with me the whole way!  Wow, I thought that was pretty cool!  So, Stephen sacrificed a fast time (for him) to try and help me set a PR.

The race went well the first half, but I just didn’t have it in me to pick up the pace much more the second half.  The weather was pretty hot that day, so that’s my other lame excuse.  So, I didn’t hit my goal time, but I did indeed set a PR…and ran under 1 hour 40 minutes for the first time in Half Marathon!  My time was 1:39:43.

I was supposed to run about 68 miles, but missed a day from being sick and was fighting it for a couple days.  Never felt that great this week, but I made it through most of the miles.  Again, I don’t know whether to attribute this to allergies, or an actual cold this time.

I had probably the worst long run of 19 miles (supposed to be 20) that I’ve ever had.  I had to stop several times and kept telling the people (Stephen and my brother) with me to just continue on…but they wouldn’t leave me!  I struggled to make it home, but I eventually did.

This is an example of a week where I kept telling myself how much I hated running.  My brain likes to go there when I have a bad run.  But thankfully the next week was better.

I finally ran the amount of miles I was supposed to this week!  The previous several weeks, I kept missing days or skipping miles.  I felt great the entire week, and finally started thinking that maybe I actually can do well in the Leavenworth marathon!

I’ve set a goal for myself to run it in a time of 3 hours and 30 minutes; which is 7 minutes faster than I ran last year.  Even with the miles I’ve missed over the past few weeks, I’ve put in quite a few more miles this year than last.

My week felt so good, that during my long run of 17 miles it was just supposed to be a normal long run.  But instead I picked it up for the last 4 to 5 miles and ran them at marathon pace.  The miles felt good and perhaps I’m not as far behind as I was thinking.

Looking to the Marathon

Overall, marathon training can be difficult.  Its a long slow process, and as you can see we all have our ups and downs.  So, no, I haven’t put in all the miles I had planned, but I finally feel like I’m starting to heal up and should be ready to go in less than 2 weeks!

I’m excited to have a taper week this week and just prep myself to feel great next weekend!  I also keep reminding myself that the cool running conditions will be ideal.  My body is going to LOVE not having to sweat so much!  In addition, the Leavenworth Marathon has a nice downhill grade for the first 11 miles or so…I’ll be taking advantage of those.  So, despite all the negative thoughts I’ve had about training, I’m feeling a bit more positive this week and hope to slay this marathon!

Anyway, that is where my current training is, and how some of my past few weeks have gone.  If you have any comments or questions, I’d love to hear your thoughts!