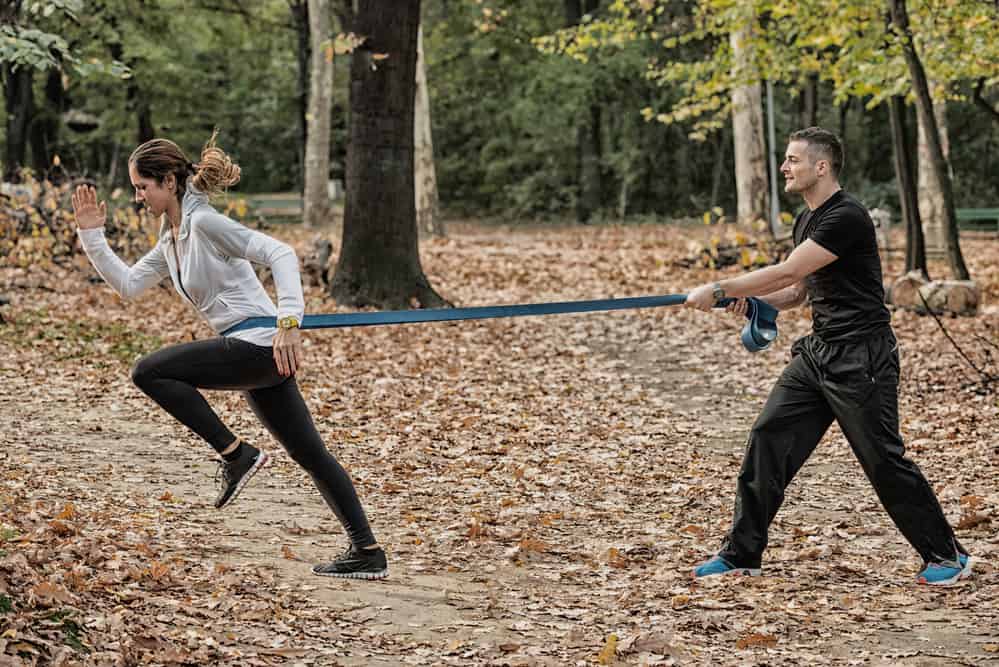 Is a resistance band for Running quite trendy among athletes nowadays? The answer to that is generally yes. There are some exceptions though.

So if you’re wondering if you should train with a resistance band for running, here’s what you need to consider:

On the other hand, training with a resistance band for running can be beneficial if:

In that case, let’s see how you can make the best use of cross-training with resistance bands.

Should You Train with a Resistance Band for Running?

What exactly Are Resistance Bands?

Why Should Runners Train With Resistance Bands?

Counters Muscle Deterioration Due to Aging

Starting Out With Resistance Bands

What exactly Are Resistance Bands?

Resistance bands are elastic loops, tubes, or flat belts that expand with varying degrees of difficulty.

Placing them around your ankles, legs, hips, or arms while training adds extra resistance to an exercise.

This activates the muscles and makes the exercises much more effective.

The overall effect of resistance band training should be strengthening various groups of muscles and improving stability.

An additional perk is losing extra weight and improving metabolism.

It’s not surprising then that many elite runners, and athletes, have incorporated resistance band exercises into their cross-training programs.

Why Should Runners Train With Resistance Bands?

There are seven good reasons why runners should consider training with resistance bands.

There is a myriad of benefits for general health, and some are specifically great for running.

Moving with an elastic band around your ankles or knees isn’t easy. And it’s even more difficult to perform complicated exercises while pushing back against a resistance band.

This added complexity tends to improve an athlete’s coordination and stability.

Tripping and falling become far more difficult if your body is well trained to stay balanced.

Additionally, the muscles are often strengthened symmetrically, with both sides of the body working in unison. This too adds extra stability.

A strong core is critical in high-intensity sports like swimming and running. It helps in creating momentum and keeping the arms and legs well coordinated.

This in turn allows the lungs to expand to full capacity, which provides the body with a healthy supply of oxygen. Proper form is also essential for balance and stability. 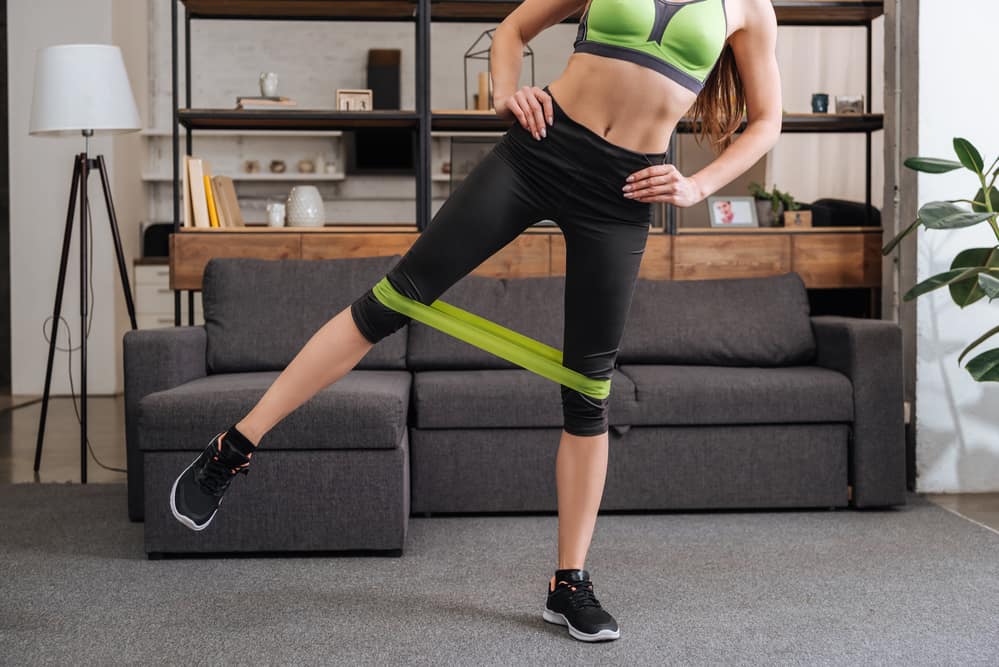 The small muscles surrounding joints are among the hardest to address. These muscle groups often play second fiddle to the larger muscles in the leg, hips, and glutes.

Resistance bands strengthen both the large and small muscle groups.

That’s because these bands activate the targeted spots thoroughly, thanks to their moderate resistance plus repetitive action.

With the joints surrounded by rock-solid muscles, there’s a significantly reduced probability of injury.

Additionally, the joints and bones wouldn’t be too stressed after a run. Runners occasionally suffer from conditions like runner’s knee and Iliotibial band syndrome (ITBs).

These are often reduced by doing that extra training with resistance bands. Moreover, they’re usually used in post-injury rehab.

It’s always advisable to distribute loads evenly between the muscles, joints, and bones. That’s why the extra support from these small muscles is quite valuable.

Almost all runners feel that they have asymmetric strengthening of their muscles. For example, they could have super strong calves, but weaker glutes, or vice versa.

This is another reason why cross-training with resistance bands is important.

You can use resistance bands to address certain groups of muscles for a while. Getting these muscles in good shape adds up to the total strength of your whole body.

After all, we are as strong as our weakest parts.

There are tons of exercises and resistance band shapes to assist runners with that.

5. Counters Muscle Deterioration Due to Aging

Muscle mass is a dynamic thing that’s susceptible to increasing, decreasing, and even clear loss.

Nutrition, activity level, overall health, and aging are some of the factors affecting muscle deterioration, which is also known as sarcopenia.

Training with resistance bands is easier on the joints than weight-training.

It also helps in maintaining the current muscle mass and slowing down the deterioration process. This improves the athlete’s vitality, even with age.

Starting Out With Resistance Bands 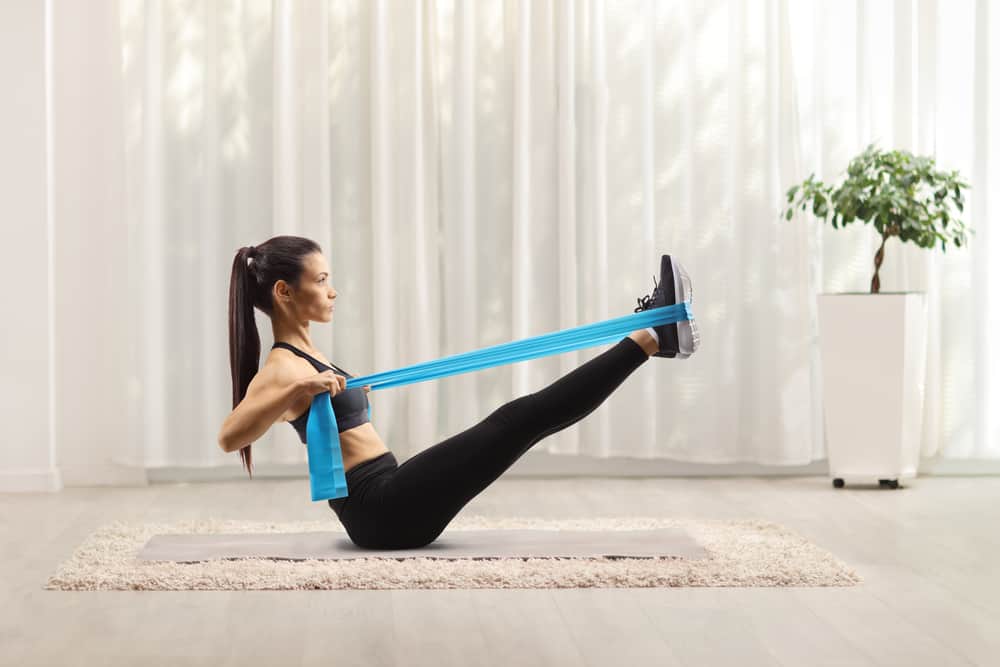 Resistance bands are quite similar to weights. No one would start lifting 200 pounds! That is often a recipe for sore muscles and even injury.

A rational way to do resistance training is to add more weights as your muscle mass grows.

This includes what they look like and how hard they are to expand.

Runners often use loop bands with moderate resistance levels. Typically, this allows for a reasonable number of repetitions before exhausting the muscle.

The loop form is versatile, and it can be easily incorporated into many exercises.

Cross-training with resistance bands two or three times a week should be quite sufficient. This gives full benefit of the exercises, without overstressing the body.

Runners are often challenging their bodies to go further and go faster. This huge undertaking can be done with proper training.

Day after day, these athletes add more strength to their muscles. But that’s rarely enough to achieve their goals.

To get into top form, runners should have stability, balance, proper form, and full coordination.

Cross-training with a resistance band is great for running as it contributes generously to all of these areas.

This helps in protecting joints, reducing injuries, and improving the runners’ overall performance.