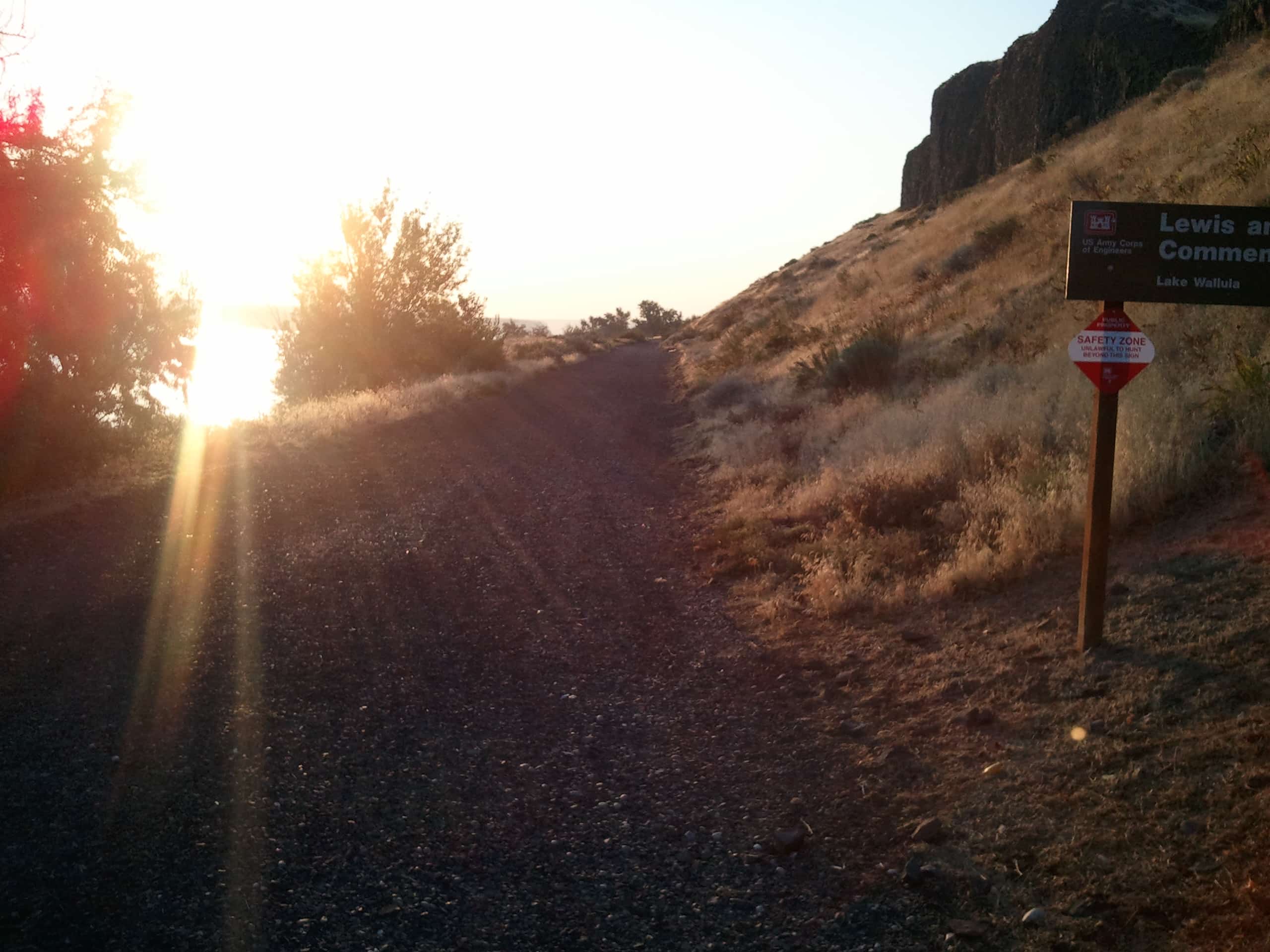 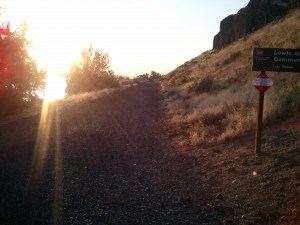 I have not really said much about it but I recently decided that I am going to run two marathon this fall.  I know that is crazy given that my typical routine involves one spring and one fall marathon.  I figure that it is good to change things up a little bit so I am looking forward to running the Leavenworth Marathon on October 5th and then two weeks later giving the Dog Lake Marathon a shot.  I know two marathons is two weeks is not a good idea but I am sure I can find examples where I have done “stupider” in my life.

I figured that since I am changing things up I would also try to change up the whole training routine as well.  The training plans that I have used for my last several marathons, including Boston earlier this year, have basically been a self-designed amalgam of a variety of philosophies that I have found work for me.

I felt that I was stuck in a bit of a training rut so I decided that I would try to follow a specific program recommended by Pete Pfitzinger.  This program recommends a variety of medium long-runs, some of which involve several miles at marathon race pace.  I have to admit those marathon pace run days are not my favorite.  Today just happened to be one of those days as the plan called for a 16 mile run with 10 to 12 of those miles at marathon pace.

I guess the thing that I do not like about running pace runs is that I typically have to run them alone.  As I was planning my next pace run I noticed that the Columbia Corridor Corredores (we will go with calling them CCC from now on) were holding a series of trail runs over in nearby Umatilla, Oregon.

From their website the event seemed super low key and offered a 5 mile trail walk, a 10 mile trail run, and 25K trail run.  25K trail run – interesting.  That is almost exactly the 16 miles that I had to run and, well, if I had some other people to chase for some of those miles at marathon pace, perhaps this tempo run might not suck as bad as usual.

It ended up coming together pretty quickly but I went ahead and registered not long before the race was scheduled to occur.  Seeing as my plan was to run this as a “training run” I actually ended up registering under an assumed name.

I know that is silly and really it is more of a tradition with me than anything but if I am ever going into a race for training purposes or as a pacer for a friend I will typically register under an alias of Burton Guster from the USA TV program Psych.  That tradition started when I was first getting back into running a few years ago and I ran my first adult 5K.  Not having any clue how I was going to do and knowing my name and time was going to be plastered all over the internet, I registered as “Bruton Gaster”.

Since that time I have used Ovaltine Jenkins, Methuselah Honeysuckle, Trapezius Milkington, and even Shawn Spencer.  I thought about going with Gurn Blandstein for the CCC Trail Runs but decided to stick with an old faithful.

The CCC Trail Runs were billed as a fun, challenging, and low-key event for everyone and it did not disappoint. 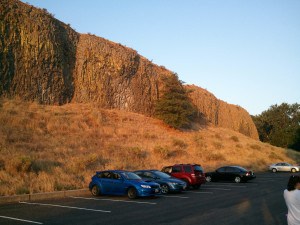 The races started almost right at 7:00am so I made a point of trying to get there about 40 minutes early to pick up my race tag and get situated.  Packet pickup was smooth and the race was staffed mainly by members of the Hermiston (Oregon) High School Cross Country Team.  I did not have any issues getting my race tag and I did not even get a weird look on my name.  Let’s just say the person working the packet pickup back when I went with Methuselah Honeysuckle did not even come close to believing that was my real name. 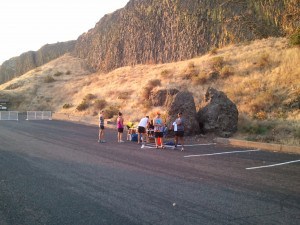 It was great to see the cross country runners out there working the course and it turns out that all of the proceeds from the event go to benefit the Hermiston Cross Country Program which includes two middle schools and Hermiston High School.  Any time your event registration goes to such a cause you cannot help but feel good. 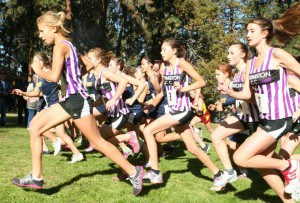 The event was low key but they did actually have tech shirts available.  I did not end up getting one since I registered so late but the way I figure it, more of my registration fee is going to youth cross country programs which is a whole lot more rewarding than having another race shirt in my closet. 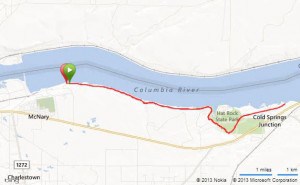 The trail is well maintained and in some places is reminiscent of a gravel road but in others it was uneven horse trails.  At one point in the race I was noticing that the only “shoe” prints in the dirt I was running on were from horse shoes and not running shoes. 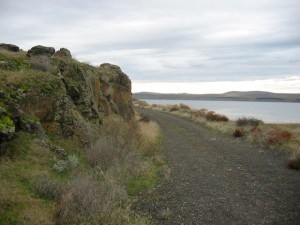 The trail was “fairly flat” but it certainly had some rolling hills along the way.  All in all, it reminded me a lot of the Badger Mountain Challenge only without the mountains.

The course was very well marked – much better than the last trail run I did where I got lost.  I did take a wrong turn on this one right around the 10 mile mark but that one was all on me – I was just spacing out and took a left and ran into a closed gate when I should have followed the markings to the right.

At around 7:00am the race was about to get going.  Before the race Hermiston Cross Country Coach Jacob Puzey said a few words and then it was go time.

The field was fairly small but you would expect nothing less from a low key event.  When the race started there was a pack of about 4-5 individuals that took off out into the lead.  I had no idea if they were 25K people, 25K relay people, 10 mile people, or what but I just kept reminding myself that this is a “training run”.

I was looking to try to keep a consistent paces in the 6:50 minute mile range since I am shooting for the slightly sub-3:00 hour marathon range this fall.  I do not know if it was the fact that we were running on a somewhat uneven dirt trail instead of the road, if it was because I did not rest up for this like I normally would for a “race” or if this new training program is not what it is cracked up to be but it took a little more effort to stay around pace splits than I anticipated.  Nonetheless,  it was nice since there were a few people in front of me that I could focus on.  That lasted until the 5 mile aid station where the people immediately in front of me turned back.

At the 5 mile aid station I stopped and grabbed something to drink and then hit the next part of the trail.  This portion of the trail was, dare I say, more challenging than the first 5 miles.  I was running alone from pretty much that point on.  I had no idea how many 25K people were in front of me but I kept reminding myself that this was a tempo run not a race.

At around 7.5 miles there was another aid station so I stopped for a minute to see if I could grab an energy gel and get some fluids.  I had a brief chat with the person manning the aid station and he was very accommodating.

I was off to find the turnaround point which I figured was about another quarter mile up the tail.  At this point I saw the 25K leader heading back and yup he looked like a real runner and not an old broken down weekend huffer like myself.  Turns out he was Hermiston High School’s star runner Alejandro Cisneros who ended up setting the 25K course record.

I ran up to the turnaround point which, according to my GPS watch, was at 8.0 miles as opposed to 7.75 miles but hey who is counting and well the plan called for a total of 16 anyway. 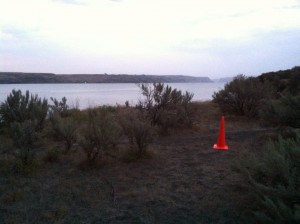 After circling the cone at the turnaround point I started back retracing my steps along the trail.  I figured I would try to make it to the aid station that was at the “5 mile mark” and would call that the end to the tempo portion of the run (would be the 11 mile mark).  I eventually made my way back to the aid station where I took a bit of time to catch my breath while getting some fluids and calories before running the last 5 miles as a recovery run. 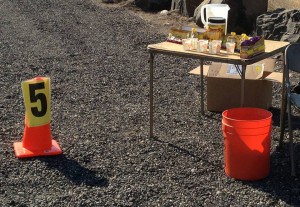 On the way back I saw several of the others who were participating in the 25K and some of those in the 10 mile event.  It looked like everyone was having a good time out on the trails.

I ended up coasting into the finish where there were several people gathered.  The CCC had some awesome snacks out for the finishers.  I did not hang around for the post race festivities because I needed to get back home for some family activities. 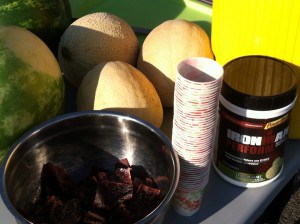 Benefits of Using a Race a Part of a Training Program

The whole experience had me thinking quite a bit about the benefits of incorporating races into your training program.  Don’t get me wrong I usually use races as an integral part of my training for goal races.  For example, I usually try to run a half-marathon 4-6 weeks in advance of a marathon to see what sort of physical condition I am in and better gauge what I should expect when it comes to race day.  This was different though.  This, for me, was taking race integration into your training program to the next level and I found it valuable.

Incorporating races into your training program provides the important benefit of  simulating race day conditions.  You are simulating the race in every possible way, not just physically but also mentally, emotionally and, dare I go, spiritually…  Running an smaller race or two in advance of a goal race provides valuable feedback about your conditioning that allows you to make any needed improvements to your training plan.  It allows you to experience the stress and emotions of race day morning and practice the organization required the night before and the morning of the big day.  It can provide you an opportunity to practice new techniques and fueling strategies.  It can help you be comfortable running with groups of people and practice pacing strategies.  In short, it allows you to test out and practice every aspect of running a race before it counts.  For me, there is a lot of value in that.

The CCC Trail Runs was fun.  I must say, it was a much better way to do a marathon pace run than just hitting the roads alone.  This is the first time I have done one of the CCC events.  They have some other events that are semi-local that might be fun to check out some time.  One thing I do know for sure is that I will have to pay better attention to Hermiston High School when cross country season rolls around…