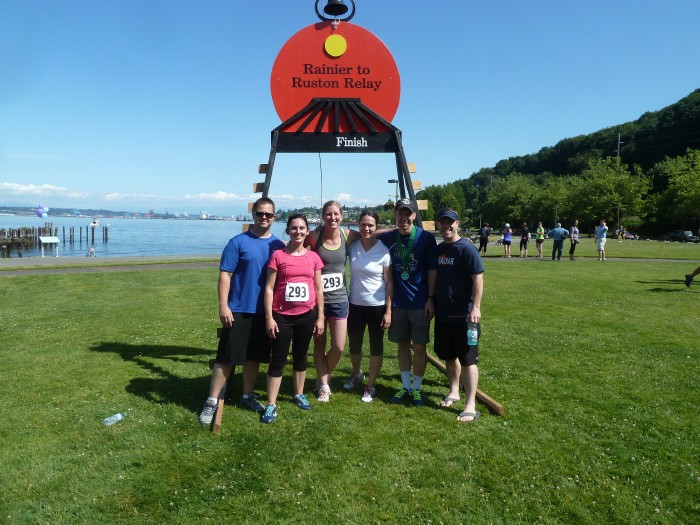 Today, I wanted to provide a recap of the race and a short update on my state of running.  Its actually been quite a while since I’ve provided any sort of race re-cap…hopefully this will help me get back in the habit!

What is Rainier to Ruston?

As part of the relay race, each runner runs 2 legs; consisting of usually between 3 to 6 miles.

This is actually the second time I have done this race.  Way back in 2011, I was on another team of 6 that ran the race.  And in fact that race started a team that has now grown to include nearly 20 or so runners that stay in touch via facebook and we have run many events together over the past 3 years.

So, Rainier to Ruston started it all, and for that reason is nostalgic.  Plus its a really fun race in a beautiful part of the pacific northwest.

Leading Up to the Race

I wish I could say that I trained like I should have for this race, but I didn’t.  I’m still not in the greatest shape of my life (see my last blog post here), but knowing that this race was coming up did help me get myself into gear at least a little bit.

For the few weeks leading up to the race, I was running about 20 to 25 miles a week or so.  Before those few weeks, I was not running hardly at all…maybe only a few miles each week.

So, my training leading up to the race was not fantastic at all.  I simply had a base in place, which I knew was enough to get me through the legs.

The race was on a Saturday morning, but the start of the race is about 4 hours from my hometown, so we drove up on Friday evening and stayed at a nearby hotel.

Thanks to my brother (also on the team), we found a unique Italian restaurant open only on the weekends with eclectic decor…called Mama’s.  It was enjoyable, and carb load was complete!

After the meal, we had to decorate our team suburban of course.  Here’s a couple of images:

After getting a good nights rest, it was time to head to the start line.  The scenery is absolutely amazing at the start of the race!  We picked up our race packets and took a few pictures as well:

Once the race got started, it was non-stop action until the finish.  Our first runner began at about 9:15am with leg 1.

I was in position 4, so I still had a couple of hours before I would need to start running.  So, I just enjoyed cheering on the other runners and the great scenery.

My first leg was 5.6 miles, and was mostly along a forest trail that I really enjoyed!  Despite being a little chunky and not in the best of shape, I was able to keep about an 8:15 mile pace on average.

Here I am finishing up my first leg:

Despite being far from my peak conditioning like I was last year during my marathon training, I was still able to pass 21 runners during that first leg…sweet!

And of course, you have to hit the Honey Bucket every once in a while:

The second half of the race starts to get out of the mountains and trees and into more populated areas.  In addition, rather than a crisp morning, it turned into a warm afternoon.

So, the second half of the race was not quite as enjoyable as the first…it’s the time that requires you to dig deep on rely on your training (if you did any).

My second leg was only 3.1 miles; however, it was a much more difficult terrain and of course much warmer.  I was running through mostly sand and weeds the entire time…so it was slow going.  It was difficult to get traction in some places.

As a result, my pace was much slower…around 8:40 or so I believe.  However, I was still able to pass 5 other runners (including a couple of people walking).

Here I am finishing up my second leg:

I was worn out and beat down…but I had a great time!

We had just a couple of legs to go after mine, and our team members finished strong despite being in the heat and running on concrete through Tacoma.

Luckily the race finishes at Marine Park, which is much more Scenic with a nice grassy area to relax in.  Here’s a couple of photos at the finish:

Overall, Rainier to Ruston is a fun race that runner’s of all levels can enjoy.  As with any race, you always want to perform your best, especially since you are part of a team…but its also an event where time really doesn’t matter.  Its more about enjoying time with friends, celebrating staying fit, and seeing some great scenery as well.

However, we still performed fairly well considering everything.  Overall, we finished in 61st place out of 185 teams.  Here’s the results if you are curious to see how everyone else did.

For me, this was a great event to help get my training back into gear a little bit and will hopefully propel me to train a bit more and get myself back into peak shape.

If you have any thoughts or questions, please feel free to add a comment or two below!