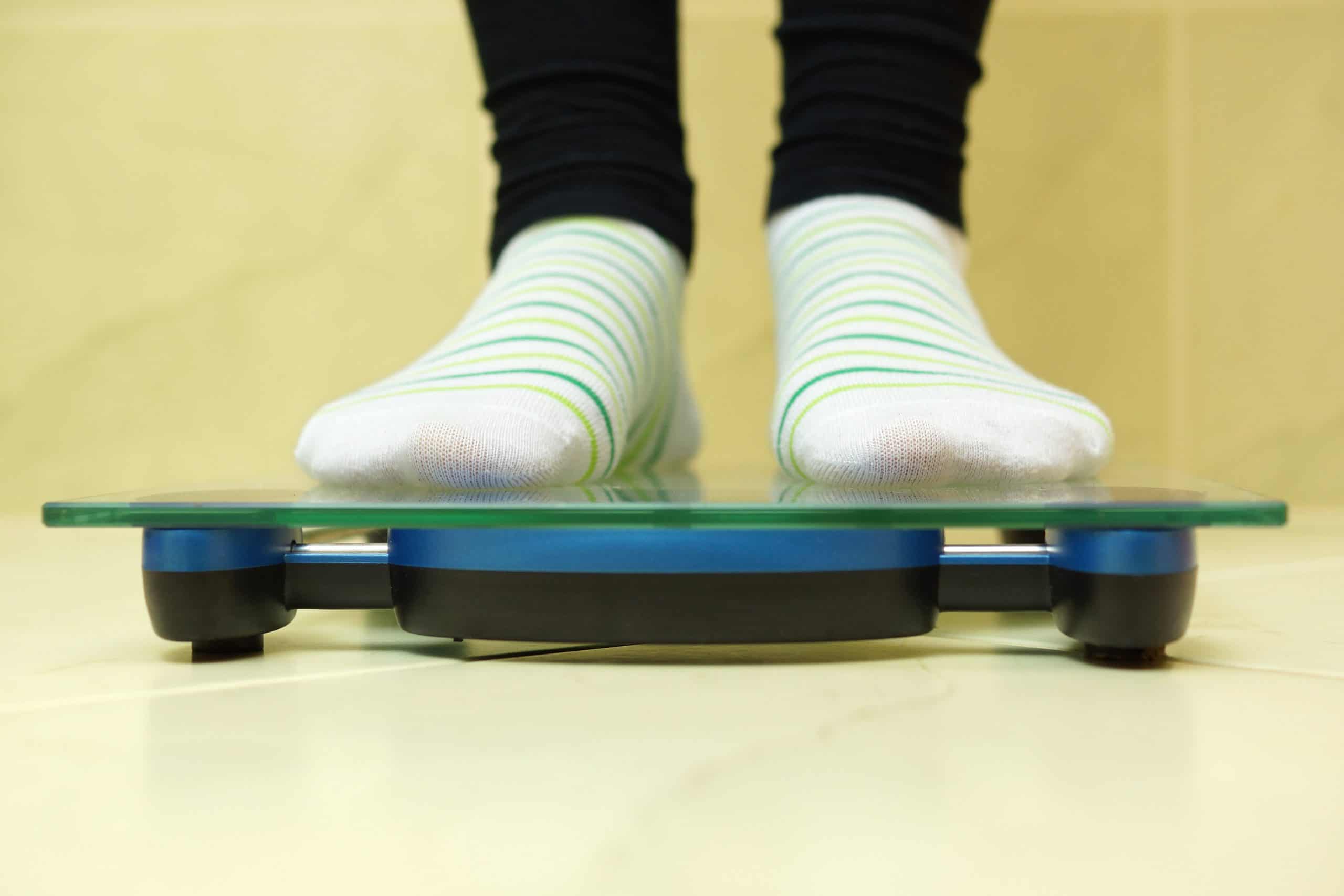 Getting into regular running, you probably hoped to shed some pounds or at least maintain steady body weight. Unfortunately, some runners are faced with the least expected when they step onto a scale after a week of running; the number went up!

If you’re like the majority of runners, chances are you started running as a way to lose weight while doing something more enjoyable than hitting the conventional gym. While it’s true that -depending on your technique- running can burn calories and body fat, the outcome may not always be weight loss.

In some cases, you may actually end up gaining weight from running. In today’s article, we’re exploring the different reasons that could be leading to your weight gain despite running, how to resolve them, and the healthy way to go about your mission of weight loss by running.

Why are You Gaining Weight from Running?

Let’s take a look at the possible causes of gaining weight from running:

1. You’re not increasing your mileage

If you’ve started running for some time and you haven’t seen a change on the scale or you’ve put on an extra pound or two, there’s a good chance you’re not covering enough miles per week.

Increasing your total weekly mileage can bring you more success in losing weight. Although there’s no specific number of miles each week that’ll make you drop the pounds, the general rule is “the bigger the difference between your calorie intake and expenditure, the more likely weight loss will occur”.

According to the USDA Food and Nutrition Information Center, you need to burn off 3,500 calories per week more than you consume to lose one pound. This corresponds to burning 500 calories each day of one week to shed off a single pound, or a decrease of 1,000 calories a day to drop two pounds in one week.

When it comes to running, the American Council of Exercise states that going for a 30-minute run can burn between 300 and 500 calories depending on your weight. For the average runner, this means that burning 3,500 calories would be equivalent to running for about 3.5 to 4 hours per week.

You could be running every day of the week, but unless you’re burning a higher number of calories than you’re taking in, you’re not going to shed a single pound.

As such, one reason for your weight gain -although you’re a regular runner- may be that you’re consuming more calories than you realize (and need) because you’re hungrier at the end of the run.

An effective strategy that runners often incorporate in their weight loss plan is to divide their calorie intake into several portions throughout the day. For example, you can try having 5 or 6 small meals instead of 2 or 3 big ones to avoid overeating out of increased hunger.

While you’re at it, make sure that even your snacks are on the healthy side such as vegetables and fruits. Don’t munch on junk food as not only does it contain more calories, but it also doesn’t make you feel full and can cause you to be more hungry.

Additionally, try to fight the popular temptation of “treating yourself” after a workout with a high-fat or high-calorie food after an intense run. Instead of an ice cream bowl or some cheesy fries, try a reward that’s not food-related such as a massage or new pair of running shoes.

By planning your meals and snacks, your choices automatically become healthier because they’re more deliberate. You may find it easier to use a journal to keep track of your food so you can know the exact amount of calories you’re taking in.

This obligation of writing down what you’re eating and drinking throughout the day can also help you better evaluate your diet.

How Many Calories Do You Need to Lose Weight

The 2000-calorie diet is the recommended average by the USDA, but you can calculate the number of calories you specifically need via this Daily Caloric Expenditure calculator.

Since we established that the USDA Food and Nutrition Information Center recommended burning off 3,500 calories more than your weekly consumption to lose one pound, knowing the number of calories you need to eat will help you in creating a diet plan that offers a deficit of 3500 calories.

This can consist of burning 500 calories every day to shed off a single pound in a week, or burning 1,000 calories a day to lose two pounds. Running-wise, the American Council of Exercise estimates that a 30-minute run can burn between 300 and 500 calories depending on your weight.

3. You’re working out the same way all the time

While becoming a regular runner is beneficial to your health, your body may get too used to its effects that they no longer make a difference if you’re doing the same workout pattern every day. For example, if your run always consists of that 3-mile loop around the block.

Muscles are continuously adapting to the sort of physical demand you’re putting them under, so if you’re running the same trail with the same level of intensity over and over again, you may not end up with a scale that won’t budge, or worse; it may move up instead of down.

To fix/avoid this scenario, mix up your workout routine by throwing in some hills, sprint intervals, and different surfaces to run on such as dirt, pavement, grass, sand, track, or treadmill. This will keep your muscles “on their toes” and help them burn body fat and calories.

You can also practice the following:

Running the same distance at a constant pace every time you go for a run is likely to cause your body to get used to the level of effort you’re exerting, leading to a state of stasis when it comes to burning calories.

As mentioned earlier, muscles are continuously adapting to the sort of physical demand you’re putting them under. So if you don’t change things up a bit, you won’t see the progress you hope for.

The solution here is to increase the distance of your running route a few times a week, while the rest of the runs stay as usual. This will leave your body not “knowing” what the next workout is going to be like, so it continues to actively burn energy to meet whatever energy demands you put it through.

To change up your pace, try running with an increased speed at several intervals during at least one run a week. Do this by adding speed through the following steps:

When you feel that this pattern has become too easy for your body, prolong the duration of the speed intervals.

4. Your liquid calorie intake is too high during and after runs

Another possible reason for putting on weight from running is consuming a too-high liquid calorie intake during and after runs. This is an aspect that runners often forget about, especially those undergoing half marathon or marathon training.

Running for such long distances can have you drinking an excessive amount of beverages loaded with too many calories. Unless you’re running for a long distance that’ll take more than 90 minutes, there’s really no need for you to down a sports drink during or after the run.

If you’re running for more time, you can use a sports drink like Gatorade to replenish your lost electrolytes. Other than that, plain water is effective for hydration during short runs and after runs.

Generally, you want to minimize your intake of sports drinks, soda, and fruit juices as these are loaded with sugar and can be a huge yet silent source of calories in your diet. Not to mention, they won’t leave you feeling full.

5. You’re injured and eating more than you can burn

Upon injury and being unable to run, some runners still keep up the same eating habits they maintained when they were working. It’s also common to find some runners eating more quantities than they normally do when they’re running because they have more free time to spend lounging and doing activities that involve eating.

This will ultimately lead to consuming more calories than your body is burning, which causes weight gain. Here are a few ways to avoid injuries from running so you can prevent putting on extra pounds while you heal:

Are you familiar with the saying “abs are made in the kitchen”? This phrase simply means that you require both exercise and diet to tone your body and lose weight.

Now, this isn’t an encouragement to chase one of the “magical” fat loss diets floating around. However, it’s an invitation to understand that a calorie deficit is key in weight loss.

Gaining weight from running could be a result of you starting to eat more because you feel like you need more fuel to complete your runs, only you’re overdoing it. So if you need to shed some pounds, you must burn a higher number of calories than you take in.

Running is typically one of the best ways to do that, especially because long-distance running and sprinting push your body to use more energy by burning more calories. All this working out, however, will make you hungry.

This means you’re going to have to make up for the huge difference by eating more calories than you normally do, which may cause weight gain. Alternatively, you should try other sources of nutrition and fuel such as munching on a carbohydrate-based snack before your run within 1 or 2 hours.

Additionally, you should consume natural/healthy fuel sources. Avoid energy bars as they’re loaded with sugar, calories, and processed ingredients that do more bad than good.

If you’re gaining weight from running, that may not be a bad thing. After all, the extra weight could just be you building muscles.

This is even more probable if your workouts feature a lot of HIIT-style exercises such as hill running, or additional strength training. These types of physical activity lead to building muscle mass, and as muscle tissues are heavier than fat tissues, the numbers your scale shows will go up.

This is why it’s generally advised that you base your evaluation of your body’s image and health on how you feel, not how much you weigh on a scale.

If your results are healthy, you’ll experience increased levels of strength, energy, and elevated mood. If you’re getting unhealthy results by gaining fat, you’ll experience negative symptoms such as feeling groggy, sluggish, and depressed.

If you’re certain your weight gain is due to gaining muscle mass, keep it up!

8. Your body swells after an intense workout

Last but not least, you may be gaining weight from running because of the changes your body goes through when you begin any exercise plan, especially if it’s an intense one like marathon training.

Here, the change particularly refers to swelling. You see, working out stresses the muscle fibers and induces micro-tears that can cause inflammation.

Immediately, the body starts to work on repairing these microtears by pumping excess water to regions that need healing to support the process. This can be perceived as weight gain of water.

If this is the case, you may be surprised by the spike you see on the scale. But remember, the gain could be a natural step in your body’s recovery journey.

All you can do then is make sure your diet is healthy and that your body is getting enough time to heal between runs.

There you have it, a complete guide on the reasons for gaining weight from running or not losing weight in general.

As you can tell, there are many possibilities to explain the rise on your scale despite getting into running, so make sure you first rule out any medical cause then go through our list to pinpoint the culprit and deal with it.