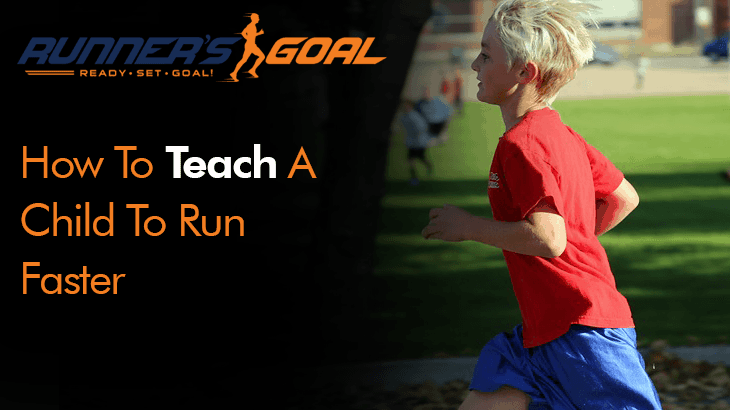 Children are like adults — they tend to stick with activities they’re good at doing. After all, nobody likes to fail, or feel like they don’t stack up to their peers.

When it comes to running, kids know how they compare to their classmates. Ask a kid who the fastest child in his class is, and he’ll have the answer immediately.

The good news is that with regular practice, any child can improve his or her running speed. This article will tell you how to teach a child to run faster.

What You Can Do

No, because they aren’t fun.

Remember how you felt when you were a kid — did simply understanding something was good for you make you want to do it? Of course not!

You still picked candy over vegetables. And an afternoon of playing basketball with your buddies was much more appealing than spending time with your grandma.

The same theory applies here. If you make running fun for a child, they’ll want to do it, but if it feels like work, they’ll avoid it like the plague.

Play a game of tag with your child — he’ll be running without even realizing it. Or grab three of his friends and set up a four-man relay at your local track.

They’ll love seeing how quickly they can complete their relay, and they’ll have fun as they’re doing it. They’ll be begging you to take them again and again.

Tip 2: Practice What You Preach

If you ever played basketball in school, you’ll remember the special type of torture known as wind sprints. Feared by kids everywhere, wind sprints were exhausting.

You sometimes resented your coach who seemed to delight in making you do these sprints until you were ready to collapse. The worst part about it is that he wasn’t doing them with you — he would just stand there blowing his whistle.

Don’t just be your child’s coach — be his partner in crime. Run with him, don’t just cheer him on from the sidelines.

Children have a lot more respect for people who put their money where their mouths are. If you want your child to get faster, put in some sweat equity and get faster too.

If he sees you out there by his side, he’ll better understand that self improvement isn’t just a kid thing — it’s a lifelong journey.

Show him the great things about running, not just the sweat and labored breathing that comes with it.

Sign him up for a 1-mile race. Show him the excitement and energy of racing day, and let him take full advantage of the popular post-race snacks.

Look at upcoming local races online, and let him pick one he most wants to do. Superhero races are popular all across the country right now.

What self-respecting kid wouldn’t want to put on a costume and dash down the streets of the city? If you let him plan out his costume, and better yet, take a friend with him to run in the race, he’ll be counting down the hours until the big day.

Another way you can convince a child that he wants to keep running is to incorporate his love of gadgets into running. Get him a Fitbit or Garmin watch to wear so he can track his own progress.

If you can get your child to want to run faster, it will happen. Most kids are relentless once they get interested in something.

Without the proper running form, your child will never reach his maximum potential when it comes to speed. It won’t be easy, but teaching him the right form will pay off in the long run.

Look at his foot strike, and have him lean slightly forward and swing his arms as he goes. In the beginning, you’ll likely have to issue a lot of reminders every time you see his form reverting back to his old ways.

The key is to offer more than criticism. You also need to offer encouragement.

If his form has really improved, but there’s still one or two minor things he needs to tweak, remind him of how far he has come and how proud you are of him for trying.

Is your child eyeing a college scholarship in track? Or does he want to improve for his base running in baseball or so he can get down the court quicker while playing basketball?

Or maybe he simply doesn’t want to finish last anymore when his class runs races in P.E.

Ask him why he wants to run faster, why it matters so much to him. The answer might surprise you.

No matter what his motivation is, you should try to support it. If it matters to him, it should become one of your top priorities.

Once you know what his motivation is, you should remind him of it when you feel his dedication is starting to lag. Everyone has lazy days — days where playing computer games or binge-watching Netflix seems like a more appealing choice than an hour of hard exercise.

If his motivation is basketball, put a picture of him in his uniform in a place where he will frequently see it — a good place might be the refrigerator. Having a visual reminder of his goals will help him focus and get to work.

Tip 6: Put In the Practice

To get faster, your child will need to run regularly. There’s no way around it — if you want to get better at something, you have to be willing to do the work.

A kid who runs regularly will be faster than he would be if he didn’t do regular runs. With every run, he is training his body to become stronger.

While he’s out there pounding the pavement, make sure your course includes some hills. Make a game out of who can run the hill the fastest.

Regular hill work can pay off big time in terms of overall fitness and speed.

Tip 7: Work the Whole Body, Even the Arms

The better overall fitness your child has, the more his running will benefit. Even exercises like pushups are important for running speed — even if you don’t understand how arm strength will help.

No one is telling you to turn your child into a body builder. He doesn’t need to be lifting weights or adding huge amounts of muscle.

He should just tone what is already there with simple weight-bearing exercises like pushups and planks.

Tip 8: Don’t Train Too Much

Rest days are an important part of running. Your body needs time off to repair itself and cut down on the chance of injury.

If you are running every day with your child, that’s too much — unless it’s just the amount of running he might have in his ordinary activities, like playing tag. But when it comes to structured running, it’s best to work in a rest day at least once a week.

On the flip side, you don’t want to run too little every week. To improve your performance, you should be running at least 3 times a week.

Kids work best when there’s some sort of reward attached to their efforts.

To help your child stay on track, set a tangible goal for him. Ask him what he feels is a good benchmark to weigh his progress and let him set several goals and rewards.

The first goal should be something he’ll be able to reach fairly soon, maybe within a month or so of work. Set a reward he’ll look forward to — it could be a night at the movie theater or a pizza party with a friend.

The goals set should be realistic and they should target his own individual performance — not the performance of those around him.

For instance, a good goal would be shaving a minute off his 5k race time. A less desirable goal would be winning a performance medal in an upcoming race — that type of goal isn’t fair to your child because there might be some fast runners in his age category that he doesn’t stand a chance of beating.

That goal would be discouraging to him because he’ll feel like the deck is stacked against him. If he feels a goal is insurmountable, he won’t feel as motivated to try to reach it.

Remind Him of How Far He Has Come

Whether he becomes the fastest runner in his class or he simply shaves a few seconds off his PR, let him know how important his efforts are to his overall health. Remind him that anything worth doing in life doesn’t always come easy.

Maybe running is a talent of his, but maybe it isn’t. Either way, his body and confidence will benefit from pushing his limits.