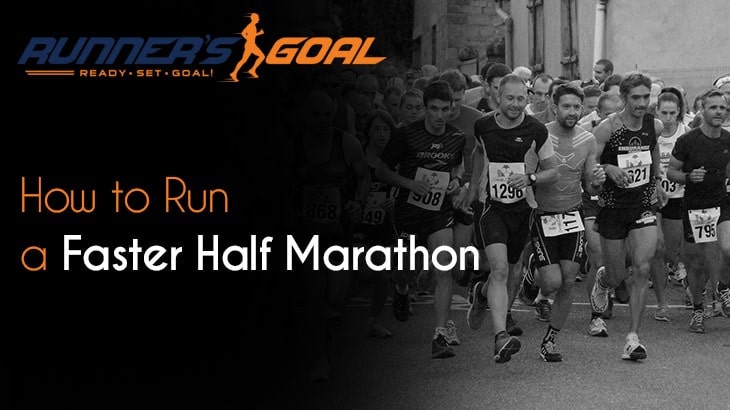 You haven’t been able to take any time off your half marathon PR, no matter how hard you train.

As runners, we tend to overcompensate. We sometimes train hard but not necessarily smart in our efforts to run a faster marathon.

By training smart, you can avoid more pain and injury and reach your goals. We’ll show you what you can do to shave some seconds, or even minutes, off your record. Follow our tips and you’ll be running a faster half marathon in no time.

You could have the best training program in the world, but you could be sabotaging your success on race day by taking the first few miles too quickly. It may sound counterintuitive -- don’t you want to run fast?

You do, but not at the risk of wearing yourself out at the beginning of the race so you can’t perform your best during the second half. Ideally, you’ll have negative splits in the race.

If you are able to pull off negative splits, you’ll finish strong. But if you’ve spent all your energy running blazing fast miles in the first half of your race, you won’t be able to hold on during the rest of the race.

You need to run this race at your pace -- not somebody else’s. So don’t let race day excitement make you think you need to go charging out of the gate.

Tip 2: Do a Weekly Tempo Run

You may have heard about tempo runs, and there’s a reason that you see them discussed in so many running articles. They work.

Tempo runs are faster runs that don’t push you to your limits. You’ll want to run slower than your race day pace with tempo runs.

You should be able to say a few words here or there while doing a tempo run, but you won’t be able to have a lengthy conversation with your best running buddy. Tempo runs help you increase your speed endurance, which will help you immensely during a half marathon.

Long runs are a crucial element to half marathon training. And if you skip them, or cut corners on the distance, your half marathon time won’t improve.

The long run has been a key training component of runners for decades, no matter what distance they race. Your body goes through a few changes during long runs.

In order to see continual performance gains, you need to run at least three times a week. You can run more than this, but if you run too much, you risk injuring yourself, which would temporarily sideline any hopes you have of setting a PR.

If you decide to run three or four times a week, it’ll help you if you add in some cross training like swimming or cycling. You can also add in planks, weightlifting, and plyometrics.

Tip 5. Find Your Goal Pace and Then Try to Hit It

You can’t expect to do normal training runs that don’t push your limits, and then show up race day and all of a sudden set a blazing record. You need to push yourself in order to make that happen.

A few weeks before racing day, calculate the race pace you need to hit in order to break your record. Then once a week, add in a run in which you try to hit that pace.

With every week, add a mile onto that training run while still reaching your race pace goal. The key to making this strategy work is that you must set a realistic pace.

If you set a pace that’s too aggressive for you, you’ll need more recovery time between workouts. That might not go hand in hand with how many runs you have planned for the week. If you’ve been putting in the time doing your runs but you aren’t seeing any progress, the quality of your runs may be to blame. Simply doing the runs isn’t enough -- you must make sure they all serve a particular purpose.

Each week, you should do a speed run, a strength workout, and the long run we discussed earlier. If you want to add a fourth day, that would be a good place for the tempo run mentioned in Tip 2.

Running three highly-focused runs a week gives your body the proper amount of recovery it needs. It also adds high-quality miles that will bump up your fitness levels. If you just lace up your shoes three times a week and run the same speed on the same course every time, you’ll never challenge yourself enough to see real improvement.

Tip 7: Give Your Energy Gels a Trial Run

A surprising number of runners make this mistake, even though they know better. They don’t test their energy gels during training runs -- they wait until race day to use it for the first time.

Energy gels are a great performance-enhancing tool, but they can also cause gastrointestinal distress, sometimes right during a run.

If you don’t try your gel brand before race day, you could screw up all your training with a few urgent bathroom stops along the way. You don’t want to see your plans for a PR go up in flames because you lost 15 minutes to the porta potty.

Some runners believe if they train harder, they’ll become faster. That’s true to a certain extent.

But if you overtrain, you won’t be doing yourself any favors. You’ll actually find yourself running slower on race day.

If you feel overwhelmingly tired, you might be overtraining. You may need to pencil in a few days off to let your body rest and heal.

To ensure you aren’t suffering from overtraining on race day, make sure you don’t run at all, or very little, in the week before your race. Taking that time off will ensure your body and mind are ready for your big half marathon date.

Most runners have had races where they panicked and almost ran in the other direction at the sight of hills. Hills are tough -- there’s no way around that.

But if you add hills in a training run once a week, you’ll be better prepared to handle any inclines you come across during your race. Try sprinting the hills for maximum improvement.

Get Ready to Smoke Your Old Record

Beating your PR isn’t going to be easy, but it is doable. Runners aren’t ones to shy away from a challenge, so you already have the mindset you need in order to succeed.

All you need to do is dedicate yourself to working smarter and you’ll be able to run a faster half marathon. With these tips, you’ll be proudly writing your new PR on the back of your bib to keep as a testament to your own awesomeness.