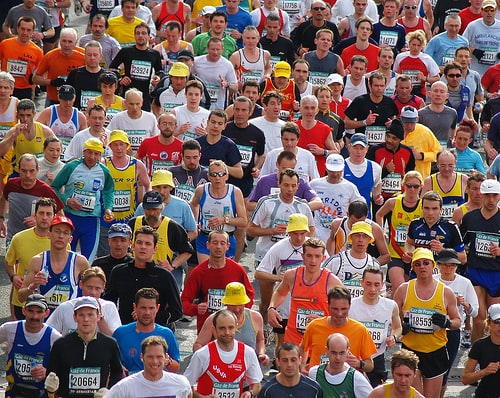 Many people gain the ability to run many, many miles each week in preparation for a marathon. 100 miles or more a week is common in elite runners (but not us mere mortals), but working up to that amount, tapering down the week before, and repairing your body the week after are much different ideas than the steady training for the months leading up to the marathon.

Knowing how many miles that you should be running for the week up to the marathon is absolutely vital to having a successful run and can actually make the difference between even finishing the race or collapsing half way through. Many people think that this is even the harder part of training for a marathon, since your brain will tell you that you are not doing nearly enough work to be able to make it through a race. According to your inner dialogue, you should run as much as possible, right?

Tapering refers directly to the reduction of mileage that takes place in preparation for the last week of training. In fact, many people use this as a way to judge the quality of marathon training programs as a whole. If you look at the last three weeks of the schedule and find that there isn’t a period of rest and less mileage, the person, with all due respect, might not know what they’re talking about.

It goes against what you might think, but rest is more productive than running when it comes to this vital part of your training. This is what makes you stronger, rather than weaker. No one will lose any fitness from tapering for three weeks, and the chances are very good that you won’t notice any drop in your aerobic capacity, as studies have shown.

Related: How To Run A Marathon Ultimate Guide

Research into the subject has turned up a lot of information that is beneficial to anyone having doubts. According to Medicine & Science in Sports & Exercise, there have been over 50 studies done into tapering and found that every aspect that they measured, including muscle hormones, enzymes, antioxidants, and glycogen all returned to normal during a quality taper.

During periods of long running, high mileage, all out training, these are all depleted and your body can have an incredibly hard time making it through a marathon if you don’t return those levels to normal. Further, the damage that has been done to your muscles will also be fully repaired in time for the big day. Overall muscle strength and immune system function even increased as well, making sure that you don’t do anything to hurt your chances, or catch a cold, before the race. Overall? A 5-10 minute time reduction, or more, is easy when a proper taper is done.

What runners should take away from that conclusion is that the taper is meant to get rid of your fatigue, and make sure that your body is fully prepared. Calm down. This is the time to take it easy and still make gains. Less is more. Chill.

After training for weeks and months on end, you shouldn’t want to blow it all now. With the proper plan, a lesson in what to avoid, and a mental plan as well, you can have incredible success.

Most people miss days running and fall behind in their training. Sick days, injuries, and more get in the way of runs and many people begin to feel guilty about missing long runs. In order to make up for that, they’ll squeeze in a few long runs before the big day, thinking that it will help them make up for it and make sure that they’re prepared for the race.

The truth of the matter is that it makes your mind feel better, but doesn’t do anything but harm your race performance. Having a fewer number of long runs, rather than long runs crammed in, is better than being injured or becoming injured in the middle of a marathon.

–Jumping Up In Mileage

Similar to cramming in long runs, many people make the final jump to their target distance in the final weeks before the race, thinking that they aren’t prepared if they haven’t run a magical number of miles in a single day. You’ll find nothing more humbling than attempting to take in a marathon after just being exhausted on a longer run than you are used to.

It doesn’t come down to a magic number of miles you’ve run at a time. All that matters is that you are strong, recovered, and have built up enough endurance to handle it. A strong foundation is more important than having a couple of humbling runs thrown in.

The Magic Number For the Final Week

What does it all mean for you? How many miles should you run? It all comes down to your body, but there is a standard that most people agree to. Certainly, an elite competitor might still be running twice as long each week, compared to a beginner. The general rule, however, is to run about 40% of your usual mileage the week before, with the previous two weeks consisting of 60% and 80%.

For example, if you typically run 50 miles a week, the week before the marathon you should be running about 20 miles. That doesn’t seem like much if you’re used to much more, but as I explained, it’s all in your head. Your body will actually enjoy those 20 miles and use them to get your blood pumping, repair your muscles, and keep your mood high.

At the end of the day, the mileage is the most important, but you should take everything into consideration. Nutrition should be scaled to the amount of exercise you’re doing, your mental state should be focused, and your routine should be intact. Keep your head in the game and you’ll see incredible results, all thanks to a quality taper.

This article was written for RunnersGoal.com by James S., a guest author.