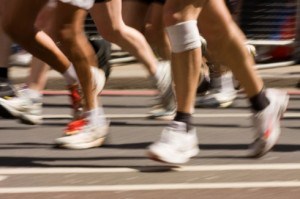 Running is one of the healthiest things that you can take part in, especially if you are overweight. No matter what kind of physical shape you are currently in, however, there is a very good possibility that you’ll become injured at some point.

For many people, it is just unavoidable and a part of life. If you know what you’re doing, though, and take proper steps to avoid injury, you can always make sure that you are as safe as possible and recover quickly when an injury slips into your life.

The Most Common Injuries

Runner’s knee comes in the form of am ache beneath your knee that just won’t go away. If you keep running, it will get worse and become a very serious problem. There are a number of reasons that runner’s knee can appear, but in most cases, it comes from the standard problems, such as improper technique, weak hip muscles, or uneven surfaces during runs.

This is very similar to the problem of plantar fasciitis, and is a similar pain just above the achilles tendon. Swelling heels, a crunching sound, and tightening muscles are all signs. A problem of tight muscles can cause it if too much strain is placed on your achilles tendon, overuse, or unsupportive footwear can all result in achilles tendinitis.

This can be one of the most problematic and annoying problems that runners face. This persistent heel pain can be excruciating in some cases if it gets bad enough, but for most people it is just incredibly annoying and enough to sideline you for a while. Plantar Fasciitis is caused by overtraining, overuse, or just wearing bad shoes, or shoes that are worn out. The root problem, though, comes to weak muscles, much like many of the other injuries that runners face.

Read more about choosing the right insoles to help with plantar fasciitis.

Shin splints seem like a mystery to a lot of people. Everyone that has ever run an extended distance has heard the term, but what are they really? In large part, shin splints can refer to a variety of injuries that all cause shin pain, for just as many reasons. In severe cases, it can result in a stress fracture, in smaller cases, though, you might merely have swelling and inflammation.

In both cases, it happens during the first month of running or during a sudden increase in mileage that your body isn’t prepared for.

There is more research done on injury prevention now than there has ever been in the history of the sport. Much of that comes from research that found that up to 80% of runners are sidelined for some length of time each year. Some of those people have multiple injuries that take months out of their training time combined.

There are plenty of reasons as to why injuries happen, but most of them center on a few different things: weak muscles, poor technique, or improper running shoes. Any of these can cause a variety of injuries, but they are all also easy to fix when you know what to do and when to do it. We’ll take a look at each of them individually.

Having a strong body is one of the best ways to stop yourself from being injured, and one of the best ways to increase your running performance as well. The combination of strong tendons, ligaments, and muscles means that your body has the ability to remain consistent on long runs, resist the damage of impacts, and hold a perfect form for an extended period of time. If you have weak muscles, it doesn’t matter how much endurance you have, the imbalance will cause you to injure yourself.

Some of the most important parts to work on are your core strength, hamstrings, and hips. Compound movements to work your body as a unit, like kettle bells for example, will help your body become used to the kind of full body strength that running benefits from. If you are switching technique and shoes as well, though, it would be wise to take up a foot strengthening routine, although it might not involve actual weight lifting.

There is a problem with the majority of new runners, and even professional runners, have and might not realize it. Poor running technique can cause a myriad of problems and fixing that technique can actually not only prevent injury, but offer a huge boost in performance.

This can mean a switch to Pose method, Chi Running, or Evolution Running, any of which offer a much greater boost in performance than continuing to run improperly. They all focus on taking charge of foot strike and body movements, moving runners away from the heel striking, arm flailing style that many use in hopes of running faster. Switching to a mid-foot strike, or ideally a style that focuses on the ball of your foot, will help align your body and run in a more natural way, compared to the unnatural, over padded shoe method that many people have adopted.

The right shoe is vital to running comfortably, but it is also important to preventing injuries that come from a shoe that will support your feet, but allow you to run in poor form and end up injuring yourself without even knowing that you are doing something wrong.

The right shoe for many people may be a minimalist, or “barefoot” shoe. These shoes are meant to replicate the barefoot running style that our ancestors used. This means that your foot will be forced to carry weight properly and not have the luxury of the support of cushioning and padding that will allow you run improperly.

Vibram is the most famous of the minimalist brands, but many other companies, such as New Balance, Merrel, or Nike use the Vibram material on the sole, making it the standard.

In conclusion, preventing injury can require a complete change to your running and body, although the injury prevention steps that you take will help you run throughout the year and never be sidelined due to injury. With proper care, your running career will be longer and more successful than ever.

This article was written for RunnersGoal.com by James S., a guest author.