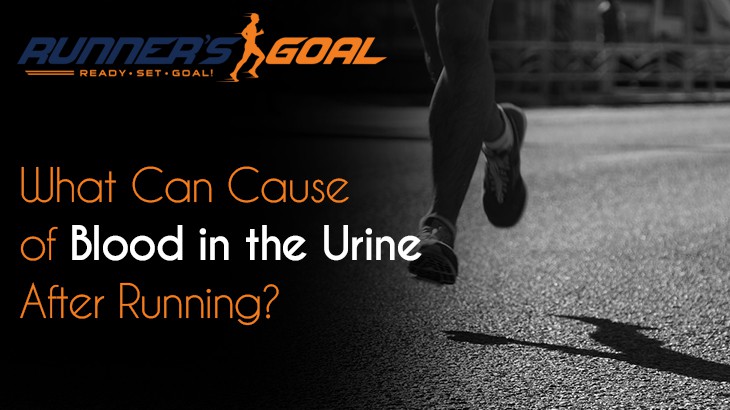 Everything seems to be going smoothly — you’ve been killing your runs lately. However, you notice blood in your urine after running and you begin to worry that something’s seriously wrong.

What Could It Mean?

First of all, take a deep breath and relax. While blood in your urine can be a frightening discovery, it doesn’t always mean that something’s amiss. Yes, it could be something serious, but it might also be nothing to worry about. Let’s look at what could be causing it.

Causes of Blood in Urine

Once you’ve discovered blood in your urine, you’re probably tempted to find the culprit by looking for answers on the Internet. While we will discuss some possible causes, it’s best to be evaluated by a doctor. The list of suspects is rather lengthy.

If you have blood in your urine, the possible causes are bladder infections, kidney stones, kidney infections, diseases of the kidneys, prostate problems if you’re a male, inherited diseases, a tumor, an injury to your kidney, medications, and even vigorous exercise like running.

There’s also the possibility that what you thought was blood isn’t blood after all. Sometimes food dye or even consuming a lot of beets can change the color of your urine, which might look like blood.

What Should You Do?

The first thing you should do when you notice blood in your urine is to call your doctor. Explain your situation and make an appointment.

It’s better to be safe than sorry. It’s no fun to spend time and money to see a doctor only to have your problem diagnosed as something mild that will go away on its own. But it’s far, far worse to ignore a problem and learn too late that your problem would have been more treatable in the beginning if you had only seen your doctor sooner.

On the very rare chance that you do have a tumor or something bad, you owe it to yourself and your loved ones to take the issue of blood in the urine seriously.

In the meantime, while you’re waiting for your appointment, try to think of other clues that may help your doctor with a diagnosis.

How have you been feeling lately? Have you had any other symptoms, even mild ones that you barely noticed them at the time? Additional symptoms such as a fever or lower back pain could mean that you have an infection that will require antibiotics.

Have you been experiencing nagging pain, either around the clock or while running? Make sure to tell your doctor at your appointment about any other symptoms you’ve had. Be sure to mention that you’re a runner so he has all the information he needs to make a diagnosis or recommend additional testing.

Try Not To Worry

While it is normal to be scared, try not to lose too much sleep over your upcoming doctor’s appointment. Bear in mind that blood in the urine is known to occur in people who do a vigorous exercise such as running, especially long-distance running.

Carry on with your normal routine as much as you can. Worrying isn’t good for your health, so avoid focusing on worst-case scenarios while you’re waiting for a diagnosis.

If you’re a runner and have blood your urine, chances are it’s nothing serious. But, by looking into the situation and getting checked out, it’s a step in the right direction.